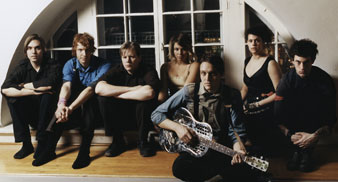 Uncut favourites Wilco, Midlake, The Magic Numbers and Clap Your Hands Say Yeah are also due to appear in the main music arena.

Other acts so far confirmed for the ‘not just a music festival’ event are CSS, The Rapture, The National, The Gotan Project and Explosions In The Sky.

The four-day event was the brainchild of promotor Melvin Benn, who wanted to create a different kind of festival, including arts, music and poetry as well as music.

He said: “with Latitude I wanted to re-format festivals and break the mould and provided a fresh angle which the public responded to.”

There are arenas that cover comedy, cabaret, theatre and poetry throughout the four days.

Uncut are sponsoring the event this year hosting our own stage of music, details of which will be announced in the coming weeks.

Click here for full line-up details and to book tickets from latitudefestival.co.uk