'Body And Soul' will be late singer's first material since 2007 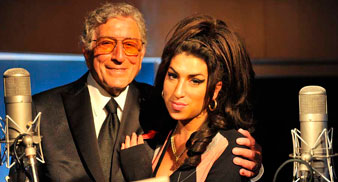 Amy Winehouse‘s duet with Tony Bennett is set to raise funds for the late singer’s self-titled drug treatment foundation proposed by her family.

The track ‘Body And Soul’ which is set to feature on Bennett’s ‘Duets II’ album, out on September 19,was recorded with Winehouse at EMI’s London Abbey Road studios.

Speaking about the recording sessions he told Billboard: “She was a little apprehensive about how to go about it, and I said to her, ‘I may be wrong, but it sounds like you’re influenced by Dinah Washington‘ and that just blew her mind. She just said, ‘Oh my God, you mean you can actually hear that? She’s my idol’ And that relaxed her, and that’s the record we ended up making.”

He also said he tried to help her during her troubles leading up to her death. Bennett added: “I was convinced I would be able to help her and talk her out of… taking drugs. The foundation is a great way to turn something positive out of this.”

The song will be the first recorded output to feature Winehouse‘s voice since she provided vocals for Mark Ronson‘s cover of The Zutons‘ ‘Valerie’ in 2007.

Other artists on the album include Lady Gaga, Sheryl Crow and Mariah Carey.

Meanwhile, Winehouse‘s father Mitch will meet members of the Government to discuss plans to set up the rehabilitation centre today (August 18).