A lot of things can happen when you watch The Necks, the magnificent Australian improvising trio, play live. Sometimes, you can become fixated on prosaic details: how does Tony Buck’s left hand keep vibrating that shaker onto his drumkit at such an ecstatic velocity for so long, for instance? Do they have hidden clocks that allow them to move so elegantly to a conclusion without appearing to even acknowledge each other’s presence, let alone look at one another? Will unzipping my coat be an unacceptably noisy intervention? 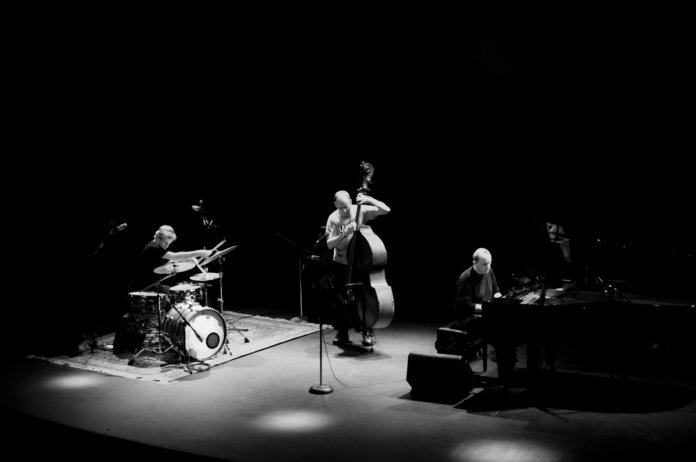 A lot of things can happen when you watch The Necks, the magnificent Australian improvising trio, play live. Sometimes, you can become fixated on prosaic details: how does Tony Buck’s left hand keep vibrating that shaker onto his drumkit at such an ecstatic velocity for so long, for instance? Do they have hidden clocks that allow them to move so elegantly to a conclusion without appearing to even acknowledge each other’s presence, let alone look at one another? Will unzipping my coat be an unacceptably noisy intervention?

Other times, these practical questions can shade into quasi-mystical ones, about how three musicians can work so deeply together that their rapport and collective understanding begins to seem uncanny. At the start of the first of three nights at possibly my favourite venue in London, Café Oto in Dalston, Buck, Lloyd Swanton (double bass) and Chris Abrahams (piano) begin by doing nothing for what feels like a minute or so. Abrahams takes off his glasses, rubs his eyes. Buck arranges his bells to be within easy reach of his kit. There is a long pause, then Swanton plays a brief eight-note phrase on his bass, pauses, exhales, extends the pause a little longer, and does it again. This goes on for maybe five minutes: a gentle, spare, meditative induction into the Necks’ extraordinary soundworld.

In some of my past writing about The Necks, like this old review of “Silverwater” , I’ve found myself falling into a kind of diaristic, blow-by-blow account of their progressions. It’s a method that predictably has shortcomings, sketched out very lucidly in a great piece by Grayson Currin on their new album, “Open” ; an album, by the by, that received a rather underwhelmed review in the current Uncut, but which, for me, is one of their best, and in fact one of my favourite releases by anyone this year.

Like most Necks albums, “Open” consists of one piece, stretching a few minutes over an hour, in which a lot goes on in such a graceful way that you can be fooled into thinking it’s a kind of minimalist operation, even though this particular operation involves a little guitar, organ and synths alongside the basic tools of the jazz trio. Watching them live, though, it becomes apparent that their method is rooted in patience and measure rather than minimalism, as such, even though Abrahams’ flurries can recall Steve Reich from time to time.

I wasn’t taking notes at the show, so a precise reconstruction of what The Necks actually do last night is beyond me, at this point. The first piece lasts about 50 minutes, and gradually builds from that solo bass opening, though not in any conventionally linear or predictable way, into some truly dense and ferocious passages. I remember Abrahams playing great wild clusters of notes that make me think of Messaien, and the ringing intensity of Buck’s playing as a bell bounces across the surface of a drum. That sound, midway between a measure of intervals in meditation practise and a fire alarm, is what lingers most about the elevated frenzy of it all; that, and Buck’s closing gestures, when he skids the bell across the drum skin to create an almost dub-like effect.

After a 30-minute break, the second set begins with Abrahams in more romantic mode; a little Harold Budd, maybe, or Satie, or Keith Jarrett – this music evolves so subtly, so constantly, that reference points and echoes come and go very quickly even as, once again, you’re lulled into a belief that not much is actually happening. This time, there’s more linear momentum to the piece; I say ‘piece’ because, even though it’s by all accounts totally improvised, Necks music seems to function with an innate logic and structure which makes a word like ‘jam’ seem completely inappropriate.

Anyhow, Abrahams keeps working out discreet new strategies of attack while Buck and Swanton are functioning, after a fashion, as a more orthodox rhythm section for, I don’t know, 15 or 20 minutes. Swanton’s bassline is kind of funky, in its way, and Buck is using a shaker in lieu of one stick to create this thick, rich beat that moves somewhere between New Orleans ritual and cosmic jazz without really being anything like either.

This morning I tried to find an analogue in the Necks’ catalogue – “Rum Jungle” from “Mindset”, maybe? – but nothing I played – the rest of “Mindset”, “Silverwater”, “Fatal” from “Chemist” – was quite like it. The show was closer to the propulsive spirit of those three albums (though not their sometimes post-rockish phases) than the more spectral domain of “Open”, but The Necks aren’t just an unclassifiable band, each individual piece they play is too slippery, too evanescent to be classified even within their own catalogue. Continuing the hunt, I ended up listening to “Black Unity”, and that wasn’t exactly right, either.

Eventually, back at the show, Buck drops the shaker and starts swinging round his kit, focusing intensely on the cymbal, and for a little while The Necks sound like what I’d cautiously describe as a normal, frighteningly accomplished jazz trio. But then they’re away again, Abraham excavating dark resonances from the furthest reaches of his keyboard; the sense of perpetual movement, fluid investigation, genuine originality stronger than ever. The Necks are one of the great spectacles in live music that I’ve come across in the past decade or so; if you have tickets for tonight or tomorrow, I can’t begin to explain how much I envy you.