The Man Who Fell To Earth! The Hunger! SpongeBob SquarePants! Our guide to David Bowie on film

The unveiling of Bowie's latest video earlier today prompted me to dig out this piece I originally wrote for our Bowie Ultimate Music Guide, about Bowie on film... 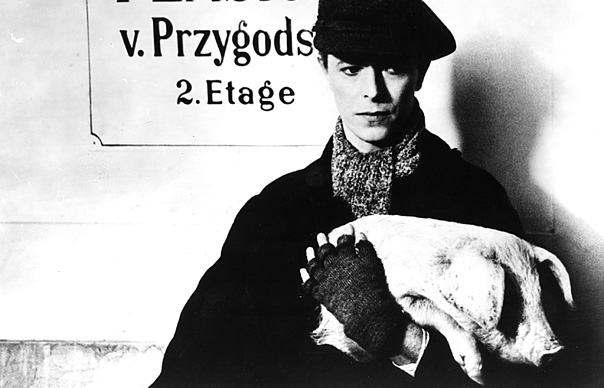 The unveiling of Bowie’s latest video earlier today prompted me to dig out this piece I originally wrote for our Bowie Ultimate Music Guide, about Bowie on film…

Most of David Bowie’s more recent acting roles have required very little preparation. He has made entertaining cameos as himself in Zoolander and The Office; and provided voices for animated characters in Spongebob’s Atlantis Squarepantis and Luc Besson’s Arthur And The Invisibles.

In 2006, though, director Christopher Nolan cast Bowie as the pioneering electrical engineer Nikolai Tesla in his elegant Victorian thriller, The Prestige. It’s hard not to draw parallels between Tesla, the reclusive genius, and Bowie himself these days, living out semi-retirement in his New York home – after all, he has often been powerfully connected to his acting roles, inhabiting his ’70s stage personae with Actor’s Studio dedication. As John Lennon dryly commented, “Meeting him… you don’t know which one you’re talking to.”

Bowie’s acting dates back to the earliest days of his career. In mid-1967, when “The Laughing Gnome” stalled his ‘other’ career for two years, he met choreographer and mime artist, Lindsay Kemp. Kemp gave Bowie his first stage role – as a clown, Cloud, in Pierrot In Turquoise, which first played in Oxford in December, 1967. It was filmed by Scottish Television and you can find it on YouTube, along with another early Bowie credit – as a mysterious, ghostly presence haunting a painter in 1967 short, The Image. Both of these are of-their-time oddities. But if Bowie’s earliest forays into acting are emblematic of a fledgling artist trying to establish himself, he’s a far more persuasive dramatic presence in the ’70s.

Much of that rests with his big breakthrough role: playing alien visitor Thomas Jerome Newton in Nic Roeg’s 1976 film, The Man Who Fell To Earth. Roeg cast Bowie after seeing him in Alan Yentob’s 1974 American tour documentary, Cracked Actor. In Cracked Actor, the disconnected, skeletally thin Bowie looked fantastically otherworldly: all Roeg really required him to do, then, was be himself. The Man Who Fell To Earth ends with Newton reviled, humiliated and broken; a fate suffered by many of Bowie’s characters.


It’s hard, however, to see where 1978’s Just A Gigolo fits into this period of Bowie’s acting career. Newton and many of the parts that followed into the early ’80s are all outsider figures: the Elephant Man, a vampire, and the goblin king. But for his friend David Hemmings, Bowie plays a Prussian officer in post-WWI Berlin who becomes a gigolo for wealthy widows. It’s a curiously ‘normal’ (read: dull) part, sandwiched between Newton and his next role as John Merrick, The Elephant Man.

If Newton was basically Bowie as himself, playing Merrick on the American stage in late 1980 required physical transformation – allowing Bowie to dust down his mime skills learned from Lindsay Kemp. When Tim Rice asked Bowie, on an edition of BBC chat show Friday Night, Saturday Morning, what appealed to him about the role, Bowie answered, “I have a thing about freaks, isolationists and alienated people.”

He’s very good in Baal, an adaptation by Scum director Alan Clarke for the BBC, which aired in February 1982. Both Merrick and Baal require the actor to put aside vanity, which Bowie does, full of piss and vinegar as Brecht’s murderous, itinerant poet. “Genius always suffers persecution,” Baal is told early on in the play; as good a description as any for many of the characters we’re talking about here.

He is persecuted further in 1983’s Merry Christmas, Mr Lawrence. Released while he was enjoying mainstream success with Let’s Dance, Bowie plays Japanese PoW Major Jack Celliers, who becomes the obsession of camp commander Captain Yonoi (Ryuichi Sakamoto). Though there are musings on honour, codes of conduct and east/west culture clashes, director Nagisa Oshima (In The Realm Of The Senses) lingers on the tensions between Celliers and Yonoi. They’re a handsome pair, and Bowie – with his blond hair and deep tan – appears almost golden. It’s a stretch when we see Bowie, then 36, playing the 10-year-old Celliers in flashback, but forgive that: he is excellent as the doomed, defiant army major, way out of his freakish comfort zone.

Bowie is required only for his Bowieness in Tony Scott’s The Hunger (1983), playing Catherine Deneuve’s vampire lover. He’s very funny as a terribly British hitman in John Landis’ comedy Into The Night (1985), facing Carl Perkins in a knife-fight. He fares less well as smarmy ad exec Vendice Partners in Julien Temple’s dreadful musical Absolute Beginners (1986). Bowie does get to dance on a giant typewriter, though.

And then there’s Jim Henson’s Labyrinth (1986). Bowie had contributed to children’s projects before – he’d narrated a version of Peter And The Wolf (1978) and recorded an introduction to The Snowman (1982). But as Jareth, the Goblin King, he will always be remembered for a dreadful fright wig, some very tight trousers and singing with Goth Muppets. To the Bog Of Eternal Stench, indeed.


After Labyrinth, Bowie’s acting career becomes bittier and less focused. He gives an intelligent reading of Pontius Pilate for Scorsese in The Last Temptation Of Christ (1988), playing him as a bureaucrat simply trying to keep the peace. Misfiring caper The Linguini Incident (1991) finds Bowie’s English bartender plotting with disgruntled colleague Roseanna Arquette. There’s a fun cameo as long-lost FBI agent Phillip Jeffries in Lynch’s Twin Peaks: Fire Walk With Me (1992), making cryptic pronouncements in an outrageous Texan accent before disappearing, literally, into thin air. Surprisingly, he’s less successful as Andy Warhol in Julian Schnabel’s Basquiat (1996); his performance too close to caricature. He is miscast as a baddie in Spaghetti western Gunslinger’s Revenge (1998) and as an ageing British gangster opposite Goldie in Everybody Loves The Sunshine (1999). His cameos in Zoolander (2001), judging a ‘walk off’ between rival models Ben Stiller and Luke Wilson, and serenading Ricky Gervais in a 2006 episode of The Office (“Pathetic little fat man/no-one’s bloody laughing”) are diverting amuse-bouches. These days, you’re likely to get your big Bowie fix from his son, Duncan, promising director of two excellent sci-fi movies, Moon (2009) and Source Code (2011).


But it’s Christopher Nolan’s brilliant casting of Bowie in The Prestige that reminds you – goblins, cowboys and Prussian officers aside – how compelling a dramatic presence he can be. Bowie enjoys a spectacular entrance as Tesla, walking into shot through fearsome arcs of electromagnetic current. This is Tesla the erratic genius, pioneering in isolation on his scientific projects: time travel, anti-gravity machines, teleportation devices. Nikolai Tesla. The man who harnessed electricity. Who else are you going to get to play him?