At home with the Shakes, Ghostface Killah, etc... 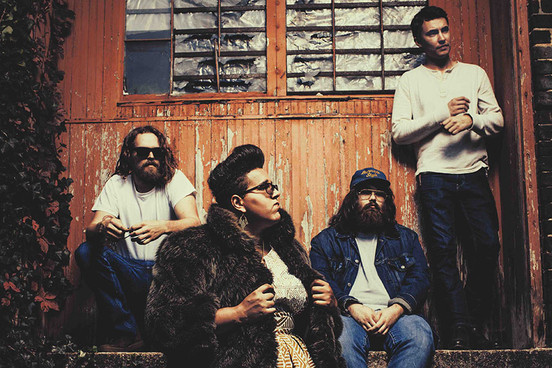 One record I’ve been playing a lot this year has been “Sound & Color”, the second album by The Alabama Shakes, and a pretty adventurous step on from 2012’s “Boys & Girls”. Beyond the debut’s original and entertaining garage-soul concept, “Sound & Color” is a richer, more spacious and wide-ranging album; one that encompasses psychedelic funk (“Future People”), lovely Curtis Mayfield homages (“Guess Who”), Erykah Badu-ish nu-soul (“Over My Head”) and even Strokesy ramalam (“The Greatest”) as well as a couple of Otis-style showstoppers (“Gimme All Your Love” and “Miss You”).

It feels like a band working out how to show their eclecticism and, to a degree, weirdness, without undermining the strength and directness inherent in their songs. “I’m not sure what people will be expecting, but they won’t be expecting this,” Brittany Howard told me a few weeks ago, when I spent a day with them in their hometown of Athens, Alabama.

The next issue of Uncut is out next Tuesday (March 24), and among some other things I probably shouldn’t discuss for a day or two, I’ve written a feature on the Shakes; an explanation, hopefully, of how a raw and entertaining bar band can creatively capitalise on the opportunities presented by sudden success. “Boys & Girls” sold somewhere around a million copies worldwide, impressively, and it’s a little baffling why more bands haven’t sought to try and run with the band’s sound, or at least something like it.

A critical stumbling block, I guess, is that not many bands can effectively locate a talent like Brittany Howard in their ranks. Besides having a staggering voice (a London gig last month featured her singing, perfectly, all 12 varied and demanding songs from the new album), Howard’s quite a character, with stories to spare about haunted houses, tornados and the allure of Nashville, and plenty to say about how the Shakes aren’t necessarily in a Southern music tradition, while illustrating how embedded the band remain in their Alabama homeland.

We spent some time in her basement music room, and driving around the Athens area, looking at old houses, schools, abandoned country clubs and so on. At one point, Howard grabbed her iPhone, plugged it into her car stereo, and went searching for a few of her favourite songs. We’d been talking a lot about Curtis, Miles Davis, Funkadelic, Bjork, Badu, David Axelrod and Antony & The Johnsons, and she’d been playing an old Santana album, “Caravanserai”, while we were in the basement.

Now, though, she cued up Aaron Neville’s version of “Ave Maria” and listened reverently for a couple of minutes, then flicked round to a song I must admit I’d never come across before, “Basketball Jones” by Cheech & Chong, which was immeasurably better than I’d have expected. Next she was on to a kind of funky lounge version of Ol’ Dirty Bastard’s “Shimmy Shimmy Ya” by some band called the El Michels Affair, and our conversation about the Wu-Tang Clan ended up with me playing her a few tracks from another one of the albums I’ve been fixated on for the past month or two, Badbadnotgood & Ghostface Killah’s “Sour Soul”.

Have I mentioned much about “Sour Soul” here? Maybe not. Anyhow, the orchestrated sweep of the Wu-Tang Clan’s 2014 reunion album, “A Better Tomorrow”, might not have pleased all the band members, with Raekwon, in particular, reportedly mutinying against the RZA’s live aesthetic. I suspect, though, that Ghostface would have been less distressed, since “Sour Soul” is his third album in a row where the ’70s soul backdrops are provided by a live band – in this case Toronto jazzers Badbadnotgood, very much the Bar-Kays to the Ghost’s gruff Isaac Hayes. It’s a serendipitous hookup, with the trio providing nuanced, immersive contexts for the rapper’s narratives: occasionally dialled in (“Pimping ain’t easy, but it sure is fun,” etc); sometimes surprising, as when he extols the virtues of yoga, meditation and fish on the outstanding “Food”.

That one’s out now, I believe. The Alabama Shakes’ “Sound & Color”, meanwhile, is due on April 20, and comes vigorously recommended. Besides my interview with the Shakes, I got some enlightening quotes from Blake Mills, the solo artist and superb guitarist who also acted as the sensitive and enabling producer of “Sound & Color”.

“I think Brittany’s aware of what she’s capable of,” he said. “But I think the frustration comes from her desire to not just be somebody who displays what they’re capable of, but who actually has a discerning sense of what they want to achieve with that power. That’s where her fire and ferocity emanate from. She’s a young adult, travelling the world and listening to new records, and all of that is culminating in her trying to make something new or futuristic, and something that feels soulful, but not like soul music. Her fearlessness is something I hope doesn’t run out.”