Renton and co reunite for the first time in 20 years 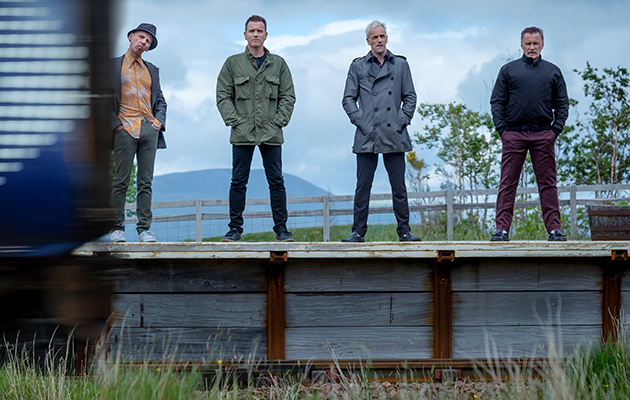 There’s a scene early on in T2 Trainspotting, where Spud (Ewan Bremner) literally walks through his own memories. Standing in a familiar street in Edinburgh, he watches mesmerized as younger versions of his friends Renton (Ewan McGregor) and Sick-Boy (Jonny Lee Miller) run passed him like flicking ghosts; history unspooling before his very eyes. It is an effective device director Danny Boyle deploys sparingly – splicing scenes and images from the first Trainspotting into this, his long-awaited sequel. T2 is, after all, a film about the past – how we are beholden to it, how we try to escape it and how it shapes us. “Nostalgia, that’s why you’re here,” Sick-Boy tells Renton in another scene, though he may as well be taking to all of us. “You’re a tourist in your own youth.”

As a filmmaker, it isn’t immediately clear why Boyle would need to revisit Trainspotting – his career has always been resolutely forward-looking. But perhaps for Boyle, like the rest of us, the lure of the past is hard to dismiss. There is considerable dramatic pull, too, in the central idea of a group of middle-aged men attempting to recapture their former glories. Boyle’s film finds his four main protagonists – Renton, Sick-Boy, Spud and Begbie – largely unchanged since the first film. This is their tragedy, of sorts. Sick-Boy plans to open a brothel with the proceeds from blackmail scams; Spud is scarred by endemic drug abuse; Begbie is in the middle of a lengthy prison sentence. Meanwhile, Renton appears to have fallen on his feet, living in Amsterdam where he sells stock management software for the retail industry.

It sounds ghastly, which is surely the point. In the first film, Renton’s famous “Choose life” monologue took aim at the dark, tranquilizing forces of capitalism – “choose a fucking big television, choose washing machines, cars, compact disc players and electrical tin openers”. Has Renton – with his “smug little cunty grin” – now become a model citizen, integrated into normal society? “I’m cleaning up and I’m moving on,” he promised at the end of the first film, shortly after ripping off his friends to the tune of £16,000. As T2 Trainspotting opens, events have conspired to send Renton back to Edinburgh, where he plans to somehow make amends. “So what have you been up to for the last 20 years?”

The success of Boyle’s film is the way in which it understands the passage of time and the value of nostalgia. The four men are brought together again – but the director is keen to show the downsides of middle-aged disappointment. There is a subplot that involves transforming a pub Sick-Boy inherited from his aunt into a high-class brothel; the setting is a run down part of Leith that has so far defied gentrification. Like the four men themselves, the pub a relic of another time. “I’m 47 and I’m fucked,” Sick-Boy admits.

All this makes for an occasionally moving film. It is not quite the big oompah of seeing your favourite band reunite, for the first time in 20 years, and bash out the hits; it is something more nuanced and fleetingly melancholic than that. It is certainly McGregor’s best performance for years. Interestingly, the story is very loosely based on Irvine Welsh’s novel Porno, which imagined the lives of Trainspotting’s protagonists 10 years on. If Boyle had made this film in 2006, one assumes we would have been waiting for a convenient gap in McGregor’s schedule, or perhaps Robert Carlyle’s. As it is, fortunes change and now Miller is the bigger star here, thanks to the success of Elementary. Miller reconnects with Sick-Boy’s quick, venomous wit and provides a useful balance to McGregor’s Renton. In one of the film’s best set-pieces, the pair descend upon a Unionist pub to steal credit cards and are forced to improvise a sectarian song – a follow-up gag at ATM, pivoting around a familiar PIN number, is gleefully funny.

Elsewhere, Bremner manages to keep the hapless Spud the right side of caricature. Carlyle’s Begbie is a tougher proposition, though. In the first film, we were shocked by the extent of his violent impulses – the pint glass tossed blindly over the balcony in a busy pub. Here – still crazy after all these years – Begbie breaks out of prison and embarks on a brutal revenge mission against Renton. At the film’s climax, you might be reminded of another film called T2 – in particular the sequences where Robert Patrick’s T-1000 cyborg relentlessly pursues Edward Furlong and Linda Hamilton through the ‘burbs of Los Angeles.

The need for a suitably ‘filmy’ climax is perhaps the only slight misstep Boyle makes. He is far happier, it seems, just enjoying being back in the company of his four protagonists and perhaps less concerned with matters of plot and narrative. The best scenes involve the characters sitting in bars or Sick-Boy’s apartment, talking. Theirs is a sealed-in, masculine world; even Kelly MacDonald and Shirley Henderson barely register in what amount to disappointing cameo appearances. Will we have to wait another 20 years for a third Trainspotting film? If so, I’d imagine it being like a swearier version of Last Orders – Fred Schepisi’s film about old friends reuniting for a funeral. In the meantime, T2 Trainspotting does a good job of honouring the original while finding something new to say, after all, about its roguish anti-heroes.