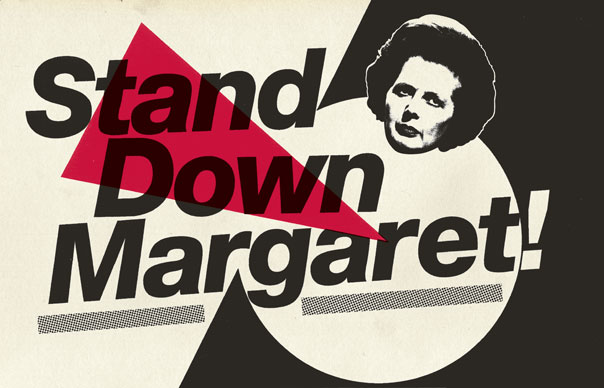 From Uncut, March 2009…
‘Thirty years on from the beginning of Margaret Thatcher’s reign of terror, Uncut revisits a tempestuous and invigorating period in British pop history. PAUL WELLER, THE SPECIALS, THE BEAT, UB40, SOUL II SOUL and THE FARM recall a time when mass unemployment energised a whole generation to learn one chord, learn another, form a band – and then make an insurrectionist statement on Cheggers Plays Pop…’

It’s 1980, and The Beat are scheduled to play their single “Stand Down Margaret” on the early evening kids TV show Cheggers Plays Pop.

“We had to get the song on by stealth,” laughs lead singer Dave Wakeling. “Our genial old Jamaican saxophonist, Saxa, explained to presenter Keith Chegwin that ‘The Stand Down Margaret’ was an old Caribbean dance. ‘Come now Cheggers,’ he was saying, ‘let me show you how to dance The Stand Down Margaret…’ and he invents some ridiculous little dance routine. Then we start playing the song and unzip our jackets and we’ve all got T-shirts emblazoned with pictures of Maggie Thatcher…”

If it seems remarkable that an insurrectionary anthem – whose royalties were being donated to CND – could be broadcast to millions of schoolchildren on a teatime show, it was something that would be repeated many times during the 1980s. In quick succession came militant screeds of social reportage from the frontlines of urban Britain: “Going Underground”, “The Earth Dies Screaming”, “One In Ten”, “(We Don’t Need This) Fascist Groove Thang”. As Toxteth, Peckham, Southall, Handsworth and Bristol St Pauls burned during the riots of July 1981, the No 1 single was the hypnotic roots reggae prowl of The Specials’ “Ghost Town”, where Neville Staples’s eerie pronouncement “people getting angry”, seemed to capture the zeitgeist.

“Never before had we seen pop getting so brazenly political,” says Ali Campbell of UB40. “Thatcher was a hate figure that seemed to unite everyone.”