Simi Stone was a member of the now apparently retired The Duke & The King, alongside Simone Felice. Tonight she’s opening for Simone at the Bush Hall, a solo turn that starts with Simi on fiddle, playing a lament that sounds like it may have been first heard a century ago, a keening in the Appalachians or somewhere similarly remote and steeped in mystery and drizzle. 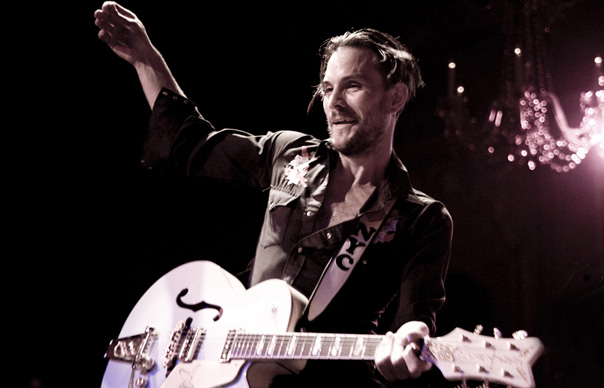 Simi Stone was a member of the now apparently retired The Duke & The King, alongside Simone Felice. Tonight she’s opening for Simone at the Bush Hall, a solo turn that starts with Simi on fiddle, playing a lament that sounds like it may have been first heard a century ago, a keening in the Appalachians or somewhere similarly remote and steeped in mystery and drizzle.

This turns out to be a version of Neil Young’s “Birds” that can be fairly described as spellbinding. It’s a stunning opening and what follows in her brief set is just as good and includes a wonderful take on “No Easy Way Out”, familiar as one of the stand-out tracks on the Love Live The Duke & The King album, a great showcase for her lustrous voice. There’s also a very touching song about the death of her father, called “Take Me With You”, and the teasingly wry “Good Girl”.

After a short break, Simi’s back onstage as a member of Simone’s new band, put together for this tour to showcase the songs from his eponymous recent solo album and featuring Simone on guitar and drums, Simi on violin, Matthew Bolter, seconded from Southend’s excellent Lucky Strikes, on lap steel and mandolin, Arthur House on piano and organ and Aurora Bangrath on drums, xylophone and guitar. They all sing, too, their harmonies a match on most occasions for the vocal interplay that was a spectacular signature of TD&TK.

They start on a high, with a dramatic reading of “New York Times”, that grave litany of headline horrors that ranges from tragedy in South Dakota to mass murder in New York via the bloody fray in Iraq. The song’s drama is almost formal, rolling drums and explosive handclaps punctuating its spine-tingling unravelling. Simi’s violin is a mournful thing and Simone, with a severe new haircut that makes him look like a prince of the underworld or someone you might see being interviewed by Werner Herzog in a documentary about prisoners on Death Row, is typically on fabulously charismatic form.

The new album provides a third of tonight’s set. “You And I”, written just after the birth his daughter and dedicated to her, is wholly uplifting. “Gimme All You Got”, the sad and disturbing “Dawn Brady’s Son” and “Charade” are markedly more sombre and introspective and come from a much darker place in his past. “Hey Bobby Ray”, meanwhile, reminds us what a hell of a drummer Simone also is. Elsewhere, there’s a by-now formidable repertoire of songs originally recorded for either The Felice Brothers or The Duke & The King that he draws from brilliantly.

At various points he features from the latter’s albums tremendous versions of “Summer Morning Rain”, “If You Ever Get Famous”, a much-requested “Union Street”, and in quick succession, “One More American Song” and a stripped-down “Shaky”, two brilliant songs about fucked-up veterans of the occupation of Iraq, in which anger and compassion are equally voiced.

There are two numbers from the Felice Brothers songbook, ecstatically-received – a spooky “Don’t Wake The Scarecrow” and a rousing “Radio Song”, dedicated to Levon Helm, which ends the set, if not the show. Simone eventually reappears for about 20 minutes of encores, starting with a lovely solo appropriation of Pink Floyd’s “Wish You Were Here”, which is followed by another of his Felice Brothers classic, “Your Belly In My Arms” and is joined by the rest of the band and the whole of the audience for a communal version of Neil Young’s “Helpless” that merges seamlessly into a raw and noisy rendition of “Knockin’ On Heaven’s Door”, the audience still abuzz long after the band have disappeared.