There’s a Youtube clip of Ryuichi Sakamoto, dressed in black hunched over a piano playing the piece of music he is most famous for – “Forbidden Colours”, from the film Merry Christmas, Mr Lawrence. It is, I guess, the idea of Sakamoto we’re most familiar with – the artist, his instrument of choice, the music he is playing both delicate and fluid. 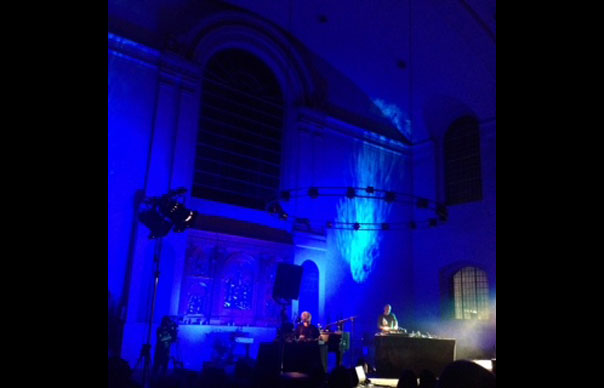 There’s a Youtube clip of Ryuichi Sakamoto, dressed in black hunched over a piano playing the piece of music he is most famous for – “Forbidden Colours”, from the film Merry Christmas, Mr Lawrence. It is, I guess, the idea of Sakamoto we’re most familiar with – the artist, his instrument of choice, the music he is playing both delicate and fluid. Of course, the range of Sakamoto’s music extends far beyond one film soundtrack from 1983, beginning in the late Seventies with the influential techno-pop of the Yellow Magic Orchestra up to his most recent project, Disappearance, an album collaboration with the American electronic musician Taylor Deupree. It is that collaboration that informs tonight’s show, part of a site specific project called St John Sessions, a season of mostly electronic music held in St John at Hackney that also includes Laraa Ji, Sun Araw and Julia Holter. The church has become a go-to venue for bespoke musical events – in recent years, Mencap’s Little Noise Sessions have brought in the likes of Coldplay, Elbow and Gary Barlow, and I spot a flyer for a one-off Pretty Things show here in April. The church itself, dating from the 18th century, has a 2,000 capacity, and its size and acoustics become relevant as the performance unfolds.

First, we have Gareth Dickson, a singer-songwriter with connections to Vashti Bunyan and Max Richter, which is a good indication of the direction his early doors set takes. Next up is Roly Porter, formerly of dubstep duo Vex’d, whose kind of weird, gloomy, vaguely industrial set recalls Tangerine Dream, Aphex Twin and the BBC Radiophonic Workshop.

If Porter’s compelling set is characterised by deep bass lines and creeped out electronics, then Sakamoto and Deupree’s is an elegant, sparse affair; though arguably one that proves to be just as immersive. Sakamoto has the lid raised on his piano, and the exposed insides mic’d up. He slowly and methodically scrapes his fingers along the piano strings, mimicking scales, occasionally breaking off to play short melodies on the keys themselves. Meanwhile, Deupree maintains a discreet backing by way of nuanced, electronic passages created with analogue synthesisers and field recordings. Sakamoto’s abstract experimentation feels almost as if he’s questioning and deconstructing the role of the piano in performance; as a conceptual philosophical idea it feels the natural next step in Sakamoto’s ongoing exploration of the keyboard. As you might imagine, the ghosts of Erik Satie and John Cage are summarily evoked.

Sakamoto and Deupree began their creative relationship in 2006, when Deupree was invited to remix a song, “World Citizen”, from Sakamoto’s album, Chasm. The work on Disappearance began a few years later, when the pair were invited to perform together at John Zorn’s East Village arts space, The Stone, in April, 2012. The music they have concocted is both extremely minimal and incredibly complex. At some points during tonight’s show – for instance, when Sakamoto’s scratches at the piano strings become their quietest – you have to work hard to pick out the intricate details. These levels of subtlety demand a high degree of concentration, which in itself implies complicity from the audience. In fact, the ambient sounds in the room – a chair scraped across the floor, a cough, a door somewhere in the church closing audibly, indistinct noise leaking in from outside the venue – themselves become a part of the performance, spectral sounds transmitted through the ether. A little later, Sakamoto – dressed in a black cardigan and top and jeans – takes a place at a table and plays some kind of electronic mouth instrument (apologies for my ignorance here: any help identifying it would be greatly appreciated).

The last 20 minutes or so of the set finds Sakamoto and Deupree reaching for a climax of sorts. Aside from the clever relation between the audience’s sporadic, impromptu involvement and the performance on stage, it’s hard too tell how much of this might be improvised and how much of it is pre-arranged. It certainly lacks a discernible narrative; but that, perhaps, is in itself a kind of narrative. I realise you can risk tying yourself up in knots here trying to fathom the intentions of these men – both of whom are inscrutable throughout. However, there reaches a point where you sense things are being wrapped up, and a gradual falling away of sound. There’s something quite radical about the way the music disappears. As sparse as it is, we’ve worked hard to engage with it, and for it to gradually, finally vanish is a strangely disquieting experience.