“Welcome to an evening of country and eastern,” smiles Robert Plant as he gestures expansively round this fabled Paris venue, taking in not just the lively capacity crowd gathered here tonight but also to his latest musical collaborators, The Sensational Space Shifters. 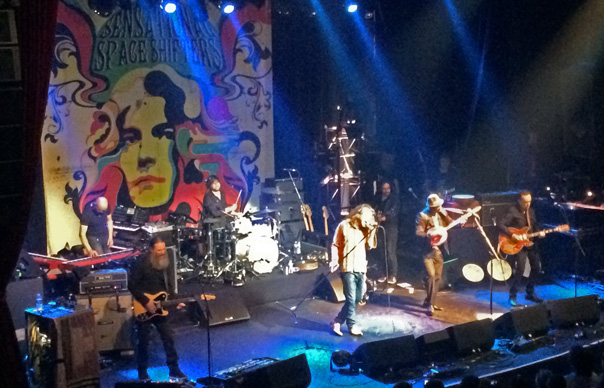 “Welcome to an evening of country and eastern,” smiles Robert Plant as he gestures expansively round this fabled Paris venue, taking in not just the lively capacity crowd gathered here tonight but also to his latest musical collaborators, The Sensational Space Shifters.

Plant’s sly “country and eastern” pun is admittedly an excellent fit for the infectious, far-out collision of styles he’s currently investigating with the Space Shifters. Essentially a regrouping of the Strange Sensation band who played with him on the Dreamland and Mighty ReArranger albums, they are drawn from a number of diverse musical backgrounds and geographical locations. They include a member of an east London jazz co-operative, a trip hop veteran, the guitarist from a Britpop band and a Gambian ritti virtuoso. You could be forgiven for thinking that bringing together musicians from such radically different disciplines might prove incompatible. Yet, under Plant’s auspices, The Sensational Space Shifters are a flourishing concern. Tonight, playing here in the faded splendor of Paris’ Bataclan, they compliment perfectly Plant’s roaming musical agenda.

Arriving on stage to Link Wray’s “Rumble”, the band are all dressed in dark colours – black or navy – save Plant who wears a brown striped shirt with bold collars, blue jeans and cowboy boots. The stage is principally Plant’s to command – though he has tough competition from Justin Adams, his adjutant in the Space Shifters. Adams is a very mobile performer: he adopts a kind of simian-like crouch with his guitar aimed out at the crowd and bounces round the stage. Adams is particularly active on “Tin Pan Valley” – an early highlight – that finds Plant almost static at the centre of the stage as Adams and his fellow guitarist Liam “Skin” Tyson twirl round him, energetically trading chunky riffs. I remember seeing Plant and the Space Shifters at the Royal Albert Hall last October, and much the same thing happened then: Plant almost removed himself from the proceedings on occasion as the performances became increasingly dynamic. There is much to be said, too, about the ebullient presence of Juldeh Camara, a man who seems to be permanently beaming as he plays his ritti – a single-stringed fiddle – or his two-stringed kologo banjo on half a dozen songs in the set, adding an extra layer to the celebratory atmosphere.

There are new songs, too. Sandwiched between “Black Dog” – charged with the deepest West African rhythms – and an intimate and surprisingly faithful version of “Going To California”, we get “Rainbow”, from Plant and the Space Shifters’ new album, lullaby and… The Ceaseless Roar. Carried along on Adams’ keening guitar riff and droning keyboard melodies, in its live version it’s accompanied by the majority of the band beating out tight, Moroccan-influenced rhythms of hand drums. A short while later, Plant debuts “Little Maggie”, where Plant explores the congruence between Celtic folk and African music, with Tyson’s banjo playing echoed in Camara’s ritti, both downhome and mystical. Fortuitously, both songs sit comfortably alongside the more established material in the set.

And what of that established material? Of course, Plant has frequently proven himself to be a sly reinventor of his back catalogue, as anyone who saw the Band Of Joy interpretations of “Misty Mountain Hop” or “Houses Of The Holy” will attest. While “Black Dog” is given yet another unexpected twist, this time dubwise (last time I saw them do it, they incorporated nimble African grooves), it’s interesting to see how true to the original recording tonight’s take on “Whole Lotta Love” is. The riff is thrillingly intact – causing much uproar from this up-for-it French audience – although Plant and his cohorts can’t entirely resist a sightseeing trip round the deep desert for a bar or two. Plant’s voice, incidentally, is amazing here: he really let’s rip, far more so than at the Albert Hall show. It’s admittedly just a fancy, but you can’t help thinking he’s changeling the spirit of the younger man who played up the road at l’Olympia 45 years ago. They encore with an incantatory “Satan, Your Kingdom Must Come Down” before Plant admits that for all his forward-looking questing, there is still the occasional moment where it is acceptable to lean back into the past, and we are treated to a long, searing version of “Rock & Roll”.

When the lights come up and the band take their bows, it’s clear that Plant, once again, has been invigorated. Of course, even from the earliest days of his career, Plant has been intellectually and musically exploratory. The Sensational Space Shifters, and their sonic inventions, fit comfortably in among the many other gifted and sympathetic fellow adventurers who have accompanied Plant on his remarkable journeys through the years. As this latest endeavour keenly demonstrates, the questing spirit in Robert Plant is as strong as ever.

Satan, Your Kingdom Must Come Down
Rock & Roll