In praise of Armando Iannucci’s The Death Of Stalin

Coal-black comedy from the master satirist 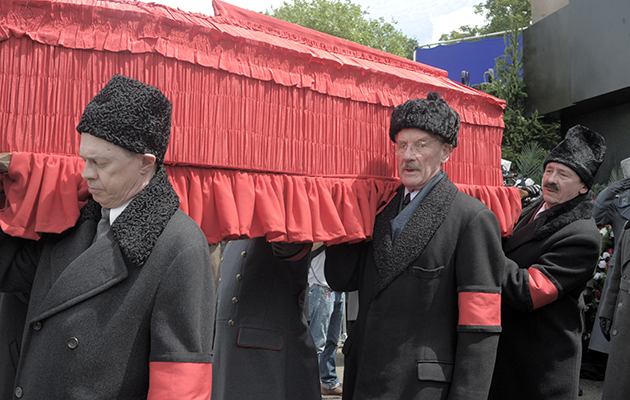 For those who’ve enjoyed Armando Iannucci’s latter day career as the driving force behind The Thick Of It and Veep, The Death Of Stalin reassuringly offers more of the same. Our story focuses on the undignified scrabble for desperate short-term survival and personal elevation along the corridors of power; only this time, the price of failure isn’t a debagging from a terrifying Scottish enforcer, but actual death. “I’m exhausted!” Declares one character. “I can’t remember who’s alive and who’s dead!”

None of the actors conceal their accents, and there’s an ancillary pleasure watching their different comedic disciplines at work – from Buscemi’s quick-fire restlessness to Palin’s veteran farceur. Russell Beale, meanwhile, plays a straighter bat, giving us a genuine villain with Beria; although none of these men are exactly heroes.

Of course, Iannucci – co-writing with old cohorts David Schneider and Ian Martin, adapting the French graphic novel series by Fabien Nury and Thierry Robin – can do this kind of thing in his sleep. “How do you run and plot at the same time?” is a line that could equally apply to any of his political comedies. But perhaps because The Death Of Stalin is based on real events, it feels as if Iannucci is reaching for a more profound point here. The Thick Of It and Veep were bleak appraisals of contemporary politics, but by stretching back over 50 years, Iannucci demonstrates that ineptness and bad faith within bureaucratic systems are not a modern phenomenon.

There is a scene where Beria produces Molotov’s wife, presumed dead, from incarceration in a Gulag – where it transpires she has been held as a traitor. Molotov’s response is simply to denounce her treachery once again; here is a man too long in the tooth to fall for Beria’s manipulations. These are men who – to quote Veep’s Selina Meyer – are “fluent in bastard”.