In May 2011, Jonathan Demme filmed Neil Young on the three hour drive from the singer’s hometown of Omemee to Toronto’s Massey Hall, where he was scheduled to play the final shows of his Le Noise tour. 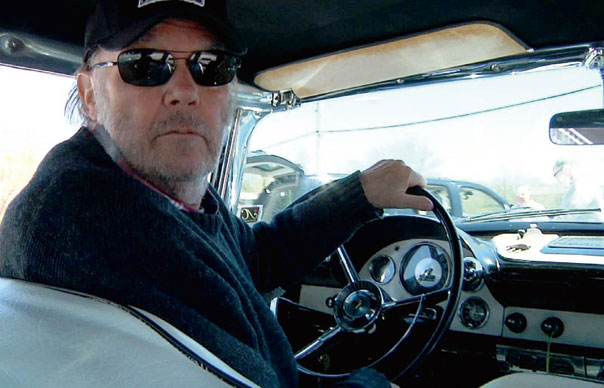 In May 2011, Jonathan Demme filmed Neil Young on the three hour drive from the singer’s hometown of Omemee to Toronto’s Massey Hall, where he was scheduled to play the final shows of his Le Noise tour.

“I’m giving a tour, from the driver’s seat, of my old haunting grounds,” as Young described it in his autobiography, Waging Heavy Peace.

Demme splices footage from this tripalongside film of the Massey Hall show into what Young describes a “docu-music-entary”, acknowledging the slightly uneven hybrid nature of the thing. Demme, now on his third concert film with the singer (after Heart Of Gold and, as yet unreleased in the UK, Neil Young Trunk Show), finds Young in a white panama hat, linen jacket, black t-shirt and blue jeans. The opening moments of the film show Young’s sound mixers setting up their boards; the soundtrack for Journeys has been tweaked in super high-resolution audio and the audience applause has been dampened. This serves to foreground the music, privileging the rich textures and vivid effects Young coaxes from a number of guitars, including Old Black for an elemental version of “Hitchhiker”.

The lack of audience footage, or establishing shots, creates an incredibly intimate piece. Unlike Demme’s previous films, which featured Young accompanied by a band, this is just Young on his own, up close, everything focussed on his actions and the delivery of the songs. Demme even fixes a camera to the microphone stand, granting us an extra level of intimacy as the camera displays Young’s immaculate nashers and catches flecks of spit. The songs come mostly from Le Noise, but Young adds in “Ohio”, “Down By The River”, “After The Goldrush” and “Hey Hey My My (Into The Black)” as well as a pair of new songs – a jaunty piano ballad “Leia” and the more sombre “You Never Call”, about Larry Johnson, the head of Shakey Pictures who died in 2010. Meanwhile, back on the road, Young is a lively raconteur:here he is, as he steers his ’56 Crown Victoria past Goof Whitney’s house, telling us about the time he ate tarmac off the road – “that was the beginning of my relationship with cars” – or putting firecrackers up a turtle’s ass: “My environmental roots are not that deep,” he admits. He follows his brother Bob through Omemee – approvingly, Bob drives “Not too fast, not too slow” – to the site of the Young family home, since burned down. Young tells Demme about sleeping in the garden during summer, “to be closer to my chickens.” Back in the car, Young reflects on this journey through his past: “That’s why you don’t have to worry when you lose friends. They’re still in your head. Still in your heart.”

Neil Young Journeys opens in the UK this Friday