Just before starting to write this morning, I spent a while digging around for the old office ghettoblaster, computer-connecting technology having failed us in our attempts to play a new EP that turned up yesterday in cassette form. The EP forms part of the capricious launch strategy of Library Of Sands, a new project from a mesa-dwelling outlier called Naynay Shineywater, who used to front Brightblack Morning Light. 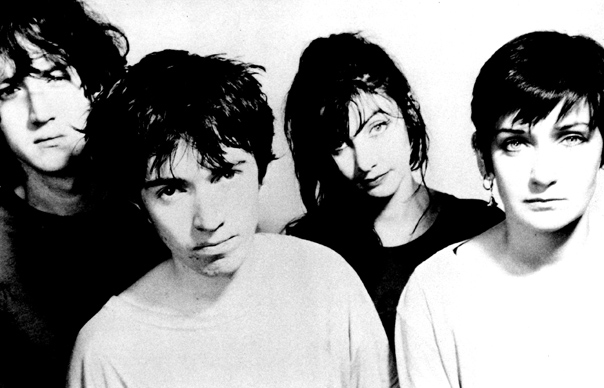 Just before starting to write this morning, I spent a while digging around for the old office ghettoblaster, computer-connecting technology having failed us in our attempts to play a new EP that turned up yesterday in cassette form. The EP forms part of the capricious launch strategy of Library Of Sands, a new project from a mesa-dwelling outlier called Naynay Shineywater, who used to front Brightblack Morning Light.

Brightblack, in the entirely possible event that you never heard them, specialised in a kind of husky, somnambulant desert funk, much indebted to Spiritualized and Dr John. Shineywater’s dedicated new age sensibilities meant that their crystal-heavy imagery was offputting to some, but the music was fantastic. This time, he has returned with three EPs: one on 12-inch (which I haven’t heard yet); one on CD (“Side To Side”, soupy ambient-blues jams with a crack Chicago horn section); and one on cassette (“Wavy Heat”, playing now, with an almost industrial grind). You should probably check Shineywater’s site, http://www.tented-tent.com/, for further details.

Anyhow, “Wavy Heat” is also remarkable for the second appearance of the week from Colm Ó Cíosóig (it’s pronounced “Cusack”, I learn from Wikipedia perhaps 25 years too late). One suspects it might have a little less cultural impact than that of Ó Cíosóig’s other new release, “m b v”; after all, Shineywater’s last album came out in 2008, while My Bloody Valentine, legendarily, haven’t put one out since 1991. At time of writing, @LIBRARYOFSANDS has 14 followers on Twitter.

All of which means that the few people who do discover Library Of Sands are likely to hear that music very privately and in their own time; its impact will be small, gradual, cumulative. The exact opposite of how “m b v” arrived at some point on Saturday night or Sunday morning, depending on timezone, stamina and luck with My Bloody Valentine’s severely overloaded website.

At 7am on Sunday morning, UK time, there was still a palpable sense of participating in a momentous event, as social media elevated the mere act of downloading and playing a new album into a collective phenomenon; who was still awake? and who wakes up at that time? For those of us who first came across MBV around the time of “Strawberry Wine” and “Ecstasy”, the feeling of being part of an apparently huge community was at once bizarre and heartening, a validation of sorts; not least when the initial excitement began to solidify into a realisation that “m b v” at least seemed to be an entirely dignified and thrilling continuation of MBV’s musical legacy.

The problem with these sudden big releases, of course, is that there’s a danger snap judgments become final ones; that once everyone has shared their first thoughts – here’s the MBV review I posted at about 9am on Sunday – they move on to the next musical revelation dropped without warning onto the internet.

There is, though, another possible path: that as a record beds in, we can carry on talking about it, so that a picture emerges of how music changes with every listen – something especially salient to a record like “m b v”, on which hidden melodies and details come into focus over time: I’m currently fixated on an escalating whoosh that comes in at 1:22, prefacing the riff, in “Only Tomorrow”, and which fades out in a sly, almost sheepish way five or six seconds later, just when you expect it to explode.

What else have I learned, or at least thought, about “m b v” in the last 48 hours? That the lower-case fetish still annoys me. That “She Found Now” is maybe out of place as the album opener (it feels like the fourth track on an EP), but has maybe been placed there for tactical reasons, as a kind of initial defusing of expectations. This is how “m b v” seems to be structured: a first hazy shrug; followed by two superb and more overt declarations of intent (“Who Sees You” reminds me increasingly of “Come In Alone”); a varied and consolidating mid-section; then the closing triumvirate of beats and fanfares and noise that offer all the bracing possibilities of what the future – or more cynically, the mid-‘90s – might bring.

Mostly, though, and happily, it feels like repeated listenings to this beautiful album have compounded the positive responses of Sunday morning so that, in this case, first thoughts mostly remain best thoughts. Even in the melee of “Wonder 2” (did they sample the plane takeoff from “Blue Monday” and stretch it over the entire track?), it’s those melodies which still feel the most potent aspect of MBV’s work here.

Someone on Twitter tagged my first review as a “rockist” reading, presumably on account of me privileging the tunes and casting the closing passage of “Only Tomorrow” as ostensibly a guitar solo. The thing is, though, that the disruptions of My Bloody Valentine and Sonic Youth provided a gateway for me into a lot of avant-garde – especially abstract electronic – music. Kevin Shields’ bent aesthetic still sounds highly original – I might even risk using the word “unique” – but as a consequence, its noisiness is no longer so shocking. Let me know, of course, how it’s working for you.

It’ll be interesting to see what Uncut’s reviewer makes of it all, two unimaginable weeks down the line. In the meantime, though, it’s probably responsible of me to flag up our current issue that came out in the UK at the end of last week, and which features Tom Waits on the cover, alongside The Beach Boys, Hendrix, Jim James, Richard Thompson, a spectacular Sinead O’Connor review, and a very different story involving this year’s other significant comeback kids, David Bowie and Tony Visconti. Full details here: https://www.uncut.co.uk/magazine/march-2013