Leonard Cohen: Behind The Scenes, Part 7! 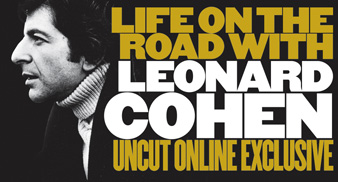 In the December issue of Uncut, we celebrate Leonard Cohen’s comeback by getting the inside story from his bandmates on their extraordinary year on the road. Here at Uncut.co.uk over the last month, we’ve been posting the full, unedited transcripts of those interviews in an exclusive seven-part online series.

In the final instalment, we present: WILFRED LANGMAID.

He’s been a critic for New Brunswick’s English-language newspaper The Daily Gleaner for over 25 years, and written often about Cohen during that period, including coverage of the first night of the “comeback” tour in Langmaid’s hometown of Fredericton. He also happens to be an Anglican chaplain.

UNCUT: Were you aware of when Cohen arrived in town?

LANGMAID: The (Fredericton) show was a Sunday night, and he arrived on Wednesday or Thursday. It was the poorest-kept secret in the city. Maybe it was the nature of Fredericton, or maybe it was just that his grace filled people. But he was walking around, down the path by the river, and no one accosted him. One fellow yelled across the street and thanked him for coming, and he just smiled and went about his way. They were here working out the kinks, for the first show in 15 years. He chose Fredericton knowing there’d be a community where, if the show had had burps and wrinkles, it would have all been forgiven. Even the way he began with the East Coast Canadian leg of the tour, he was working out all sorts of kinks, literally amongst friends.

What can you tell us about the venue?

The Playhouse is tiny, in the 700-people range, and the tickets sold out in minutes. It was an unusual audience for the venue. There were certainly Fredericton residents who liked his music and had snapped up the tickets. But there were others who were die-hards, passionate fans, who could pick songs by the first lick. There were people from their twenties right up to their seventies. There was all this uncertainty, because none of us knew what was going to happen. I’m sure that anyone who went to Glastonbury, say, later in the tour, would have been excited as well. But they had an idea what they were going to be hearing. There was no idea with us. There was a nervous energy about the place, a buzz you don’t usually get. People settled in their seats a lot earlier than usual. Fredericton is notorious for last-minute walk-ups, there was none of that. The seats were filled easily 15 minutes before the show. I walked into the lobby, and you could throw a cannon-ball and not hit a soul. Leonard was obviously nervous too. We were in the fourth row, and could see him pacing back and forth backstage. Everyone was in their seats waiting. Thankfully he didn’t keep us waiting long. He came on at 5 past the hour. And three hours of magic followed.

What was the response when he arrived on stage?

Even when he appeared on the stage, there was a two-minute standing ovation. Not a note was playing. Just the fact that he was there. We just rose to our feet. He looked out with that nervous, shy smile, and kept bowing and nodding his head; a sheepish grin, but certainly loving every moment of it. He knew that we were thrilled to have him there. And we certainly knew, based on what he said, but more importantly what he did musically and artistically, that he was really thrilled to be with us. There must have been some misgivings, some second thoughts: “Oh, my heaven! I’m really doing this!” But the band were in the pocket right from the get-go. Leonard did well from the outset, but he seemed a little jittery, for the first couple of songs; he made reference to it. But by the fourth song, “Bird on the Wire” – that was in the four-spot. The nervousness was gone. He was fully engaged, and just sailing along. He was at his best. The voice was far stronger than I expected. The energy was strong. He was playful throughout the evening. He was gracious, he was thinking on his feet. It became clear in hindsight, having read accounts of other shows, that some “ad-libbed” lines were well-rehearsed – being a “60-year-old kid with a crazy dream…” But other moments were clearly off the cuff. People would say things, respectfully, between songs, and he would banter back and forth, and it was all very playful. At the start of set two, when he was getting the keyboard programmed for “Tower of Song”, he pressed a wrong button, and laughed and had to put his glasses on. He was literally feeling his way. “So Long Marianne” was completely transformed – a totally different cadence, 4/4, not 3/3. He defined it in a different way, as Dylan would. For those of us who were fanatics, we’d hear those early licks and go: “Oh, yeah!” We’re going to get “Who by Fire…” “Oh, it’s this. It’s that…” It was a feeling I have not had since Grateful Dead concerts. Just joy. Having written about music since the late ’70s, this was way up there at the top. We never thought we’d see him again, let alone in our hometown.

Do you think the location of the first show was significant?

Montreal is only an 8-hour drive from Fredericton. And especially back in Leonard’s heyday as a poet, there was a huge community of poetry experts in Fredericton, at the university of New Brunswick where I work, and so he made more than passing reference to that, and criticisms they gave him. He spoke of Bliss Carmen from a century ago; Desmond Pacey, a literary critic and professor, and that got a personal chuckle from the audience, where it turned out there were relatives of Pacey. Really cool…

And what about after the show finished? What was the mood like?

It wasn’t a crowd that scattered immediately afterwards. We all realised that we’d been part of something really, really special. Something we knew that we’d never experience again in our lifetime. There were people who were dismissing it as it as an out-of-town try-out. It was far more than that. Had things gone off the rails, there might have been all sorts of adjustments, even to the band. But it went so well, we saw what the rest of the world went on to enjoy. We saw the template. We didn’t get something that was discarded once it moved into bigger venues. We saw a well-organised exhibition of an extraordinary canon of material. There were tweaks and additions, later. But we got the basic, beautiful skeleton of what has become a triumphant comeback.