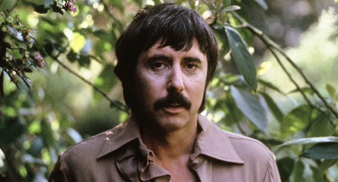 Lee Hazlewood has died peacefully, aged 78, at his home outside Las Vegas, USA, after a three year struggle with cancer.

An ingenious songwriter, singer, arranger and producer of records over the past 50 years, Lee Hazlewood has influenced a huge range of artists, from Primal Scream to Nick Cave to Megadeth.

Most famous for writing Nancy Sinatra’s 1966 signature hit ‘These Boots Are Made For Walkin’ – Hazlewood also wrote and produced most of her subsequent hits.

Hazlewood and Sinatra performed a duet together in ’67 on the critically acclaimed ‘Some Velvet Morning’ leading to a period where they made three albums together under the name ‘Nancy & Lee.’

Starting his career as a DJ in Arizona, Hazlewood went on to set up several record labels, starting with Viv Records in 1955. In the early 60s he set up LHI Records – which is best known for having released the debut album by Gram Parson’s first group, The International Submarine Band – as well as releasing his own solo albums, including ‘Trouble Is A Lonesome Town’.

By the early 70s Hazlewood moved to Sweden where he recorded a series of solo albums as well as collaborating with film director Torbjörn Axelman.

Hazlewood then ‘retired’ – making music on rare occasions over the next 20 years.

‘Rediscovered’ by a new generation of musicians, after his solo records were reissued by Sonic Youth’s Steve Shelley in the 90s, drew Hazlewood out of his elusiveness and encouraged him to return to the studio where he created ‘Farmisht, Flatulence, Origami, ARF!!! and Me’.

Invited by Nick Cave to perform at London’s Meltdown Festival in 1999, Hazlewood returned to the stage for the first time in many years.

Following the raptuously sold-out show at the Royal Festival Hall, he finally sanctioned the release of two albums of unreleased material, most notably “For Every Solution There’s A Problem”, toured Europe, and then returned to the studio to record his final album, “Cake Or Death”, which was released to worldwide acclaim in 2006.

Lee Hazlewood is survived by his son Mark, his daughters Debbie and Samantha, and his devoted wife Jeane.

And click here for a brief but funny interview filmed with his manager last year Lee Hazlewood in 2006.