There's less of the pushchairs and families at this year’s Latitude, but the site seems busier than ever - enough people to give Broken Records a pretty large crowd on the main Obelisk Arena stage.

There’s less of the pushchairs and families at this year’s Latitude, but the site seems busier than ever – enough people to give Broken Records a pretty large crowd on the main Obelisk Arena stage. 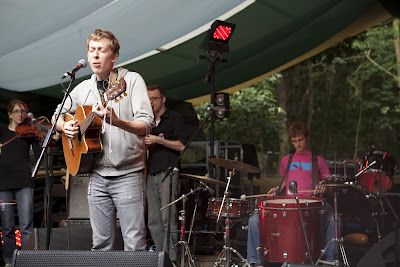 The gently hyped band have been described as the Scottish Arcade Fire ad nauseum for a reason, and today’s set, well tailored for the main stage, is suitably epic.

Using acoustic guitar and accordion in the same way the Canadian group use hurdy gurdy and violin, the band thunder along on tracks like ‘Nearly Home’, all bluster and brawn under Jamie Sutherland’s histrionic voice. Undeniably powerful, but quite a lot to take in on a sunny afternoon.

The Airborne Toxic Event don’t fare so well immediately after on the same stage. Another band using strings, this time alongside a more conventional rock backing, the group’s ultra-serious paeans of life’s darker sides, like single ‘Gasoline’, can come off as a little hammy.

Much better is DM Stith (pictured above), who draws a disappointingly small crowd to the Sunrise Stage.

Looking small and unassuming in a grey zip-up hoodie, Stith’s voice is a warbling, cutting holler, swooping between notes and bending vowels in its unique pronunciation.

There’s no doubt the songs on his debut ‘Heavy Ghost’ are great, but it’s the arrangements which really impress – behind his sometimes scratchy but soft guitar playing, a violinist trills out complex ebbing lines like a whole quartet, while Stith’s drummer is almost like the folk equivalent of Can’s Jaki Liebezeit; forever moving and rolling without ever playing a standard beat.

After the closing ‘Fire Of Birds’, performed solo by Stith with some spectral violin accompaniment, we head over to see The XX on the Lake Stage.

The four-piece, lined up along the front of the small stage, seem a little nervous, though – perhaps at the thought of not playing in some hipster basement venue.

Saying nothing to the audience, they run through their set of moody, almost shoegaze-y, electro faultlessly. Hand-triggered electronic drums create all the right taut beats, the guitars twinkle and echo just the right side of tentative and the soul and RnB-influenced vocals are equally sugary and sultry.

The only problem is that every song is effectively exactly the same. While that never hurt The Ramones, AC/DC or Motorhead, etc. The XX have only limited stage presence to pull them through.

Right, off to Spiritualised… Check back later for more dispatches from Latitude.