How the singer escaped the gravitational pull of his old band 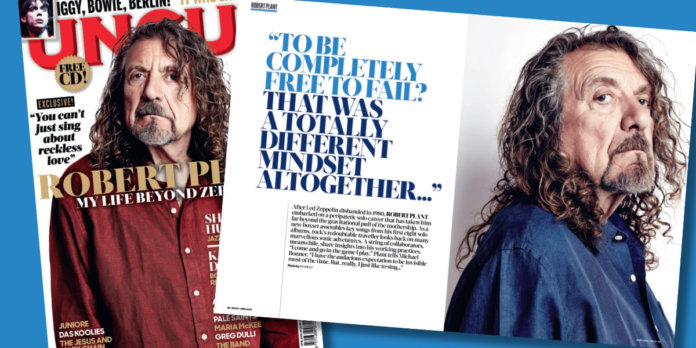 The new issue of Uncut – in shops now or available to order online by clicking here – features an exclusive interview with Robert Plant about his intrepid post-Zeppelin travels, from the Retford Porterhouse to the Malian desert.

As a new boxset entitled Digging Deep assembles key songs from his first eight solo albums, Plant looks back on many marvellous sonic adventures while a string of collaborators, including Phil Collins and Justin Adams, share insights into his working practices.

On paper, Robert Plant’s solo career began on December 4, 1980 – the date Led Zeppelin publicly disbanded. The truth is a little more complicated than that. As befitting a band of such magnitude, Zeppelin exerted a gravitational pull from which it was difficult to escape. The loss of John Bonham on September 25 that year had an incalculable impact. “Bonzo and I had been together since we were 16,” notes Plant. “It was always pretty combative, which was great fun. In the Band Of Joy he’d set up right at the front of the stage so he could get another job, ’cos people could see him. I was standing next to him going, ‘Fuck off out the way, will you? I’m at the front.’”

While Zeppelin had been musically and financially speaking the heaviest group of the 1970s, a solo career was a matter of gradual progress, not overnight miracles.“I’d been hanging around with a lot of people where I live,” Plant explains today. “People had been making records, but I hadn’t imagined myself taking on anything where it’s just got my name on it. I’d been in this magnificent fortress – Fortress Zeppelin! – so there was no real melding with anybody apart from a few frivolous things around my home area with people like Andy Sylvester and Robbie Blunt.”

This was the Honeydrippers, who toured local pubs and small clubs during early 1981 playing R&B covers. To some, the Honeydrippers were an intriguing puzzle. Had Plant given up the jet-set glamour of Zeppelin for this? The original Honeydrippers were over by the summer – but a precedent had been set for the kind of mercurial moves Plant continues to make throughout his career. Strategically, too, the Honeydrippers allowed Plant time away from prying eyes to rally himself and to consider his next steps.

I ask Plant whether he could move much faster as a solo artist, away from the scale of Zep’s infrastructure… “There was no infrastructure in Zeppelin!” He laughs. “Don’t for a minute think it was like a Fleetwood Mac tour. These were days when people didn’t even have a guidebook. With Zep, Bonzo and I, we knocked six bells out of each other, but the next day we got up and played to our strengths,” he continues. “It was not a delicate excuse me. But when you start working fresh with people, you have to be quite tentative about things.”

For Plant, then, his first steps towards a fully fledged solo career were cautious and exploratory. He set up a makeshift four-track studio in a barn at Jennings Farm – his home near Kidderminster – before sessions moved to a more formal setting: Rockfield studios in Monmouthshire. Gradually, a full band was assembled. Paul Martinez joined on bass and – how else to follow the mighty chops of John Bonham? – the services of two drummers were required. Cozy Powell first and then Phil Collins.

“I was living just outside Guildford and I got this phone call from Robert,” remembers Collins. “I was dumbfounded. I didn’t know him at all. He said would I like to play on his album. So more dumbfoundedness. He sent me a cassette of his new material with Jason Bonham on drums. I went to Rockfield and straight away we hit it off. We worked through the tracks in about a week. We became quite close – Robbie Blunt, Paul Martinez, Jez Woodroffe, me and Robert. It was nice to be part of a group that talked and drank like a group.”

For Plant, the release of Pictures At Eleven, in June 1982, was the beginning of a new perspective on life. There was a new band, new songs and even a new look. By the time the cover photo for Pictures At Eleven was shot, Plant had had his hair cut. Such symbolic gestures aside, Plant confirms his view that Pictures At Eleven was a noble attempt “to break the mould of expectation of me being part of some huge juggernaut”.

You can read much more from Robert Plant in the new issue of Uncut, out now.