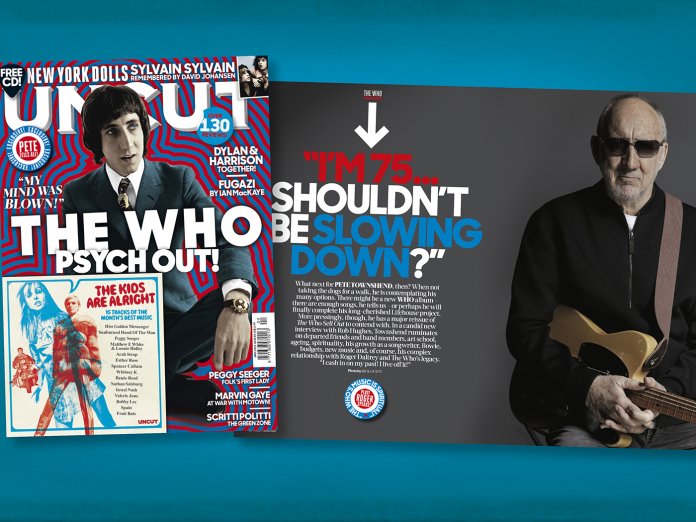 The new issue of Uncut – in shops now or available to buy online here, with free P&P for the UK – features a massive 12-page interview with Pete Townshend about the past, present and future of The Who. Up for discussion first of all is a major reissue of 1967’s The Who Sell Out, which brings back memories of home recording, hanging out with Bowie, Brian Jones and Small Faces, and trying to engage “true musical anarchist” Keith Moon…

Aside from various new projects, there are always Who anniversaries to deal with. How do you reconcile those two aspects of your life?
I cash in on my past! I live off it. If I tour with Roger I make a bit of money, but I don’t do it because I love it, I do it because it keeps interest in the past. It leads us to a new audience sometimes. For me, the past is something I’m very, very proud of. I’m amazed at how much I achieved in the first five or six years of The Who’s career. At the same time, I’m not amazed or surprised that I eventually ran out of steam. I think it was very difficult when Keith Moon died and when Kit Lambert, who was my friend and mentor and manager, died, which was all in the late ’70s and early ’80s. But I look back and just feel very lucky to have a catalogue that people are still interested in.

How do you view The Who Sell Out now?
The Who didn’t make that many records, when you compare us to bands like Metallica or even fucking Primal Scream, who’ve got dozens of albums. I think it was partly because I was the main writer, but we were also touring so much. I know that’s true of a lot of artists, but the way that I write is not with the band. I tend to write at home, which The Who Sell Out is a good testament to, because it’s got all the demos on and you can see how I gathered material.

Tell us a bit about the 1967 version of Pete Townshend…
I was still growing. A lot of people that talk to me about smashing guitars, for example, will say, “Oh, you must’ve been an angry young man.” Then I give them my art-school thing [the concept of auto-destructive art] and they go, “What a load of bollocks!” I don’t think I was angry. I had a lovely girlfriend [Karen Astley], good friends from art college and I had my own social circle, a very supportive bunch. So I felt OK about myself. I had an early friendship with a couple of other artists that I really liked. David Bowie was starting to emerge around that time and he was a real friend. The Stones were friends of mine. In ’67, I was still seeing a lot of Brian Jones and hanging out with him.

And the Small Faces, too?
Oh, yeah. Ronnie Lane and I used to spend huge amounts of time together. He was my best friend. He’d moved to Twickenham two months after I’d moved there, and we used to see each other twice a week if we weren’t on tour. We’d play together, record demos together. He was a really extraordinary guy. He was a bit like Neil Young, in that he had his own space that he was going to occupy, musically, and never deviated from it. I was close to the other Small Faces, too. I knew Stevie [Marriott] very well and would go down to his cottage in Essex. I used to try to fucking save him, because I thought he was going to die. He was in bad shape. But I knew Mac [Ian McLagan] and the guy that played keyboards and guitar for the band [Jimmy Winston] before Ian came in. I was close to Kenney [Jones] as well. I’d go along to their recording sessions, which were in Olympic Studios, down the road from where I was living in Twickenham. I used to love the way they worked in the studio; it was all about having a laugh. Later, when the Faces came together with Ronnie Wood and Rod Stewart, hanging out with them was the best place to be on the planet. Being in The Who was fucking grim by comparison. I don’t know what it says about those years, but I don’t think Roger could’ve been having a very nice time, although he had some beautiful girlfriends. Apart from that, I think he was sort of a permanent outcast. It must have been horrible for him.

Was it difficult to keep everyone in the band interested?
I didn’t see John or Roger as problematic. I saw Keith as problematic. I thought he was really going to go off sideways. He was such a fucking huge fan of Jan & Dean and early Beach Boys. It was all he listened to – that and The Goons. So a song like “Call Me Lightning” has that feel to the backing vocals. “Silver Stingray” was another one I wrote around that time that was a bit Jan & Dean.

Did you keep Keith onside because you were worried that he might quit The Who?
I was just trying to get him fucking engaged, involved in the music of the band. Keith was a true musical anarchist. He was still living at home in Wembley with his mum and dad. When we went to pick him up in the van, the windows would be open and he’d be playing The Beach Boys… yet we were an R&B band.

You can read much more from Pete Townshend in the April 2021 issue of Uncut, in shops now or available to buy direct from us here with no delivery charge to the UK.