In praise of Richard Linklater’s Boyhood

There is a telling scene early on in Boyhood that gets to the heart of what makes Richard Linklater’s new film so remarkable. 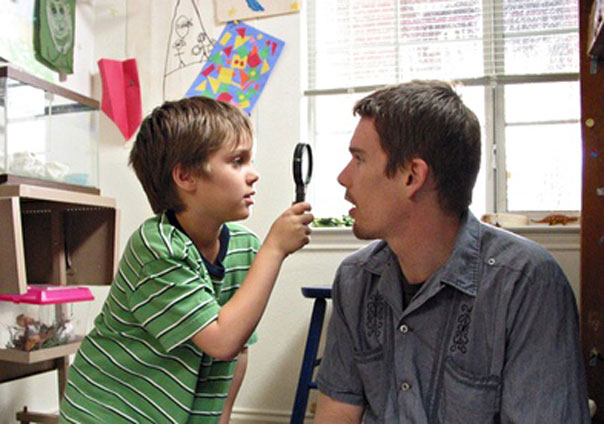 There is a telling scene early on in Boyhood that gets to the heart of what makes Richard Linklater’s new film so remarkable.

It takes place at the book launch for Harry Potter And The Half-Blood Prince, where Linklater’s main character, Mason, and his friends queue up dressed as their favourite JK Rowling characters, eager to devour the latest exploits of the boy wizard. While Linklater’s film similarly follows the life of a young boy from six to 18, there are no magical adventures accompanying this particular journey towards adulthood. Linklater has fashioned a film about the ordinary details – painting the house, getting a haircut, bowling nights with dad – and accordingly, the episodes of a boy’s life are measured not by otherworldly events but instead by a thread of small moments.

Shot in 39 says across a 12 year period, Boyhood is certainly Linklater’s most accomplished experiment yet in an eclectic career that includes the freewheeling Slacker, lo-fi animations like Waking Life, School Of Rock and the Before… trilogy, which also followed a core group of characters through various points in their lives. What partly makes Boyhood such an achievement are the mind-boggling logistics of the undertaking. The time transitions are seamless, the details shift fluidly, the passing of the years marked by clothes, hair, music, mobile phone technology. And of course the principals themselves, who quite literally transform in front of us: Ellar Coltrane as Mason, Lorelei Linklater as his elder sister Samantha, Patricia Arquette as their single mother Olivia and their father Mason Sr (Ethan Hawke), who drifts in and out of their lives.

Olivia moves her children from town to town around Texas. Much of the film’s narrative is concerned with the decisions she makes – the men who begin with so much promise but who solidify over time into something else – and the impact these have on Mason and Samantha. But Linklater avoids making judgments and steers clear from dramatic set pieces, while characters that play prominent roles in Mason’s life vanish as we jump forward in time. Linklater’s concern is how these challenges ultimately shape Mason and his family. There are few moments that feel conspicuously plot-driven; the vibe is natural and free-flowing. Incidentally, Arquette is excellent as the determined Olivia, supporting her kids in the face of persistent setbacks. Hawke has an equally complex role, growing from arrested adolescent to respectable family man: an erratic figure who nevertheless is unequivocal in his love for his children. Lorelei Linklater – the director’s daughter – is equally watchable as Samantha, growing from the young Mason’s annoying elder kid sister to good friend as the film comes to a close.

Mason’s transit from boyhood to adulthood provides the film’s narrative spine. Brilliantly played by Coltrane, Mason’s life is a series of quiet moments of disillusionment that you suspect he will carry deep into adulthood. The tenets of Philip Larkin’s “This Be The Verse” are clearly delineated here. Young Mason starts off as an open-faced blank canvas – the first time we see him, he’s lying on his back staring at clouds – and he enters adulthood as an inquisitive, quietly unconventional dreamer.

One of the most resonant scenes – and there are many – occurs quite early on. Mason and his father are crashed out on couches at Mason Sr’s, Hogwarts still fresh in the young boy’s mind. “Dad,” he says, “there’s no real magic in the world, right? Right this second, there’s like no elves in the world?” Mason Sr replies: “No, technically. No elves.”