Hello campers - since touching down a couple of hours ago, I've made it my mission to dash around the Latitude site catching as many bands as possible, giving my boots their first coat of brown since Green Man '07 in the process. Hopefully they won't see quite as much muddy action this time around.

Hello campers – since touching down a couple of hours ago, I’ve made it my mission to dash around the Latitude site catching as many bands as possible, giving my boots their first coat of brown since Green Man ’07 in the process. Hopefully they won’t see quite as much muddy action this time around. 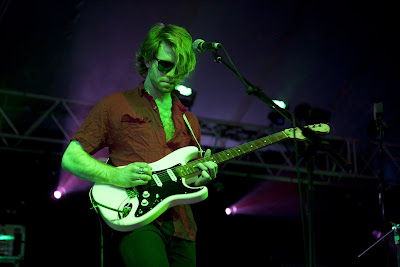 First up, to the Uncut Arena for Chairlift, three young New Yorkers currently perhaps best known for giving a song, “Bruises”, to an iPod advert. It’s exposure they deserve, though, as this set of gently psychedelic synth-pop is both beautifully made and packed with tunes that quietly weevil their way into your consciousness. Co-frontpeople Aaron Pfenning, deadpan behind terribly cool shades, and Caroline Polachek trade vocals, while drummer Patrick Wimberly darts between kit and billowing electronics. A neat reminder that if you look beyond the current media scrum around Little Boots, La Roux et al, there’s outfits doing electronic pop with more subtlety and more success – well, artistic success, anyroad.

Then, over to the Sunset Arena to catch the end of Scottish indie-rock royalty the 1990s. Who are very good, at least what I see, but it’s worth mentioning the Sunset Arena as an example of Latitude’s main selling points. A little tent buried deep in the woods, it’s the sort of beautiful little space you don’t so much walk up to as ramble into, surrounded by ferns and set under towering oaks.

Leaving, I run into sometime Uncut snapper Neil Thompson, who is heading in to catch the hotly tipped Goldheart Assembly. But I’m back down the hill to catch Brooklyn’s Amazing Baby on the Obelisk Stage (that’s the main stage, to you and me). Heard varying reports on this lot, but in the beating sun their longhaired lite-psychedelia – think MGMT, or a Mercury Rev on designer drugs – is not without its charms.

More in a bit, but right now I can hear Of Montreal playing in the distance, and if they have an actual live horse on stage – it wouldn’t be the first time – well, I’m not about to miss it.