If you were looking for a unifying thread running through HBO’s excellent new series, True Detective, then it might well be to do with faith: those who have it, those who don’t and those who may well be exploiting it for their own ends. 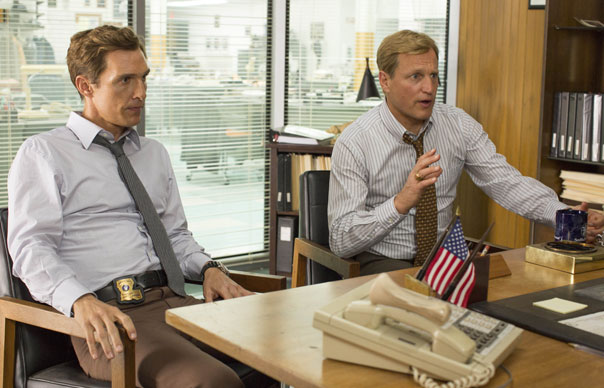 If you were looking for a unifying thread running through HBO’s excellent new series, True Detective, then it might well be to do with faith: those who have it, those who don’t and those who may well be exploiting it for their own ends.

True Detective is set in the American South where the spiritual needs of the community is paramount, tent revivals are commonplace and where the governor’s cousin is in the process of setting up a ‘religious crimes task force’. As one character learns early on, it does no good to air more progressive views regarding religion in front of work colleagues. Elsewhere, a burned out church might act as the base for an altogether different kind of worship. Dismal homemade shrines to the departed sit on shelves in the many trailers and shacks we visit during the series. A man is so burned by traumatic events in his past that he has no faith left in people and views the universe as essentially meaningless. Another man might use his faith and his status to conceal other, less desirable impulses.

Although set in 2012, the bulk of True Detective takes place in flashback during an investigation in 1995 by homicide detectives Marty Hart (Woody Harrelson) and Rust Cohle (Matthew McConaughey) into the murder of a prostitute in Erath, Louisiana. The high profile pairing of McConaughey and Harrelson – long standing friends in real life – is clearly a major coup even for a network of HBO’s stature, even if it is just for this first season (future series will focus on different cops, locations and stories). McConaughey is arguably the hottest actor on the planet right now, while Harrelson is always a reliably intense guy who’s done some excellent work recently in Out Of The Furnace, Rampart and Seven Psychopaths. As we discover from the events taking place in 1995, Hart and Cohle and very different men: as Hart says in one of the series’ first lines of dialogue, “You don’t pick your parents and you don’t pick your partner.” Hart is a well-respected family man, a conservative, a frequent church-goer, who is hitting middle age and the attendant worries regards hair loss and waistline gain – just “a regular dude… with a big ass dick.” His partner, meanwhile, lives in a sparely furnished apartment with only a crucifix and a box of criminology books for company. He walks slowly and rigidly; a self-contained, guarded presence who suffers from “chemical flashbacks”. Much to the annoyance of Hart, he is prone to lengthy, misanthropic monologues. As the action unfolds in 1995, it seems our first impressions of Hart and Cohle might not be entirely correct: both men have their private crises, both men are concealing truths from themselves and from one another. And as we can see from their appearance in 2012, the intervening years have not been especially kind.


Such is the crowded market place for TV cop shows, you might think that in order to make an impression you need a gimmick – A Thing – to differentiate your cop from all the other cops running around out there. This isn’t strictly true: a good story, well told, will carry the day more often than not. But True Detective writer Nic Pizzolatto and director Cary Fukunaga are working hard to make this a deeper and more considered exploration of the standard police procedural. Across the show’s eight episode run, True Detective – ripe Southern Gothic – is not as much about the murder as it is about the two investigators in charge of solving it. Splitting the narrative across two time periods, we see how Cohle and Hunt have changed, both physically and emotionally. We discover that their relationship has deteriorated, how their memories (both are unreliable narrators) are framed by prejudices as much as the passing of time, and that the original murder case is somehow relevant 17 years on. In 2012, Cohle and Hart are separately providing videotaped accounts of the murder case after the original files were – so we’re told – destroyed in a hurricane. In this later setting, Hart’s bluff, good-old-boy demeanor has become more reserved. Cohle, on the other hand, has changed beyond all recognition: chain smoking, chugging beers, ponytailed and moustached, he looks like he’s just come down from the hills.

Lately, Louisiana has become a favourite setting for HBO shows – Treme and True Blood. Certainly there’s something deeply photogenic about the great expanses of water-logged flatland that spool past Hart and Cohle’s car window, or the oil refineries way off in the distance pumping clouds of white smoke into the blue skies; the truck stops, bars and churches, titty bars and meth labs. Incidentally, the show was originally set in the Ozarks: another inhospitable landscape, similarly populated by small, ruined communities out there on the very edge of things. The story meanders along like the Mississippi itself, slow and leisurely, taking its time. The details emerge incrementally, though. Has this murder happened in isolation? Who or what is “the King in Yellow”? Why is the investigation being examined all these years later? “The world needs bad men,” says Cohle. “We keep the other bad men from the door.”