Avatar has much to answer for. Blue-skinned aliens aside, James Cameron’s film was famously heralded (at least by the PR team) as the future of cinema – a digital epic to change the shape of the modern blockbuster. 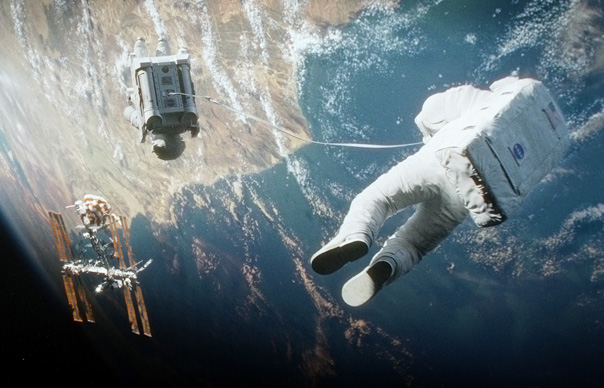 Avatar has much to answer for. Blue-skinned aliens aside, James Cameron’s film was famously heralded (at least by the PR team) as the future of cinema – a digital epic to change the shape of the modern blockbuster.

It’s a claim that’s increasingly hard to substantiate, with little evidence to suggest it’s done much more than artificially – and perhaps only temporarily – boost box office income for studios in an era of financial uncertainty. As a format, it seemed like more than a gratuitous bell-and-whistle extra to sell expensive tickets: any old rubbish got kitted out in 3D, with the 18th century Hanoverian court of King George II in Pirates Of The Caribbean: On Stranger Tides arguably being as tenuous a justification for 3D conversion as it got. It’s hardly the technological quantum leap that Cameron – despite Avatar’s multiple shortcomings – envisaged.

There is, however, a serious case to be made for Gravity, as the best and most responsible use of 3D yet. It looks like an educational IMAX documentary, but with the addition of a grippingly told story – the attempts of two stricken astronauts to survive some miles above the Earth’s surface. Where most blockbusters rely on a mix of crash-bang-wallop effects, big monsters and pseudo science, among Gravity’s many merits is its lean, pared-back narrative. Alfonso Cuarón continues to make intelligent, mainstream movies – the best of the Potter films was his, while Children Of Men is the best sci-fi movie in years. Gravity also benefits from terrific, realistic performances from leads Sandra Bullock and George Clooney.

The continuing career of Sandra Bullock says much about her straightforward appeal to her audience. At 49, at age when woman have supposedly passed their expiration date in Hollywood, she has become one of its biggest successes in a series of palatable romantic comedies or Oprah Book Club thrillers. Her constituency – middle Americans, largely – respond to her straightforward charms and the broadly morally decent films she makes. Recently, she has enjoyed three films whose opening weekend tallies each exceeded $30million, while Gravity opened with $55 million, a story in itself.

Bullock plays skittish newcomer Ryan Stone who is concerned principally with keeping her lunch down in zero gravity. She is partnered with
wily Matt Kowalsky (George Clooney), an old hand at this space lark. When their shuttle is irreparably damaged by drifting space debris, they find themselves cut off from mission control, with no choice but to navigate the 100 kilometre distance across space to the international space station and, they hope, safety. Air supply is an issue. Critically Gravity is not a science fiction film, but an intimate disaster movie that plays to Bullock’s recognisable dramatic strengths – plucky everywoman in peril – but relocates them to outer space.

Alfonso Cuarón‘s depiction of the heavens, meanwhile, is breathtaking enough – the sun’s corona as it appears from round the side of Earth, space debris appearing through the darkness, the cameras pitching and rolling round Ryan and Kowalsky, the digital detail of mountain ranges or weather formations back on Earth.