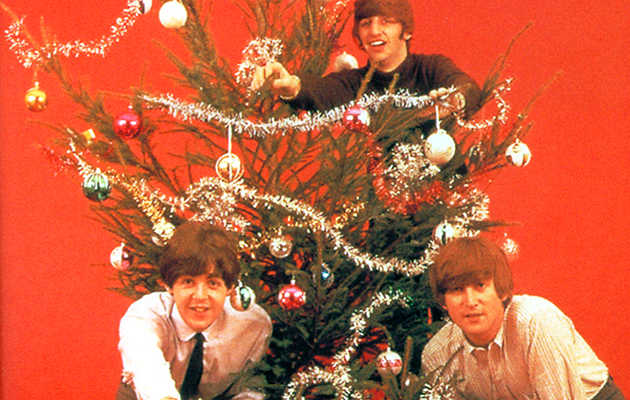 A Rare Cheese, Podgy The Bear and The Ballad Of Jock And Yono? Join us on a seasonal journey through the lost BEATLES Christmas singles – a tale that involves surreal pantos, long-suffering fan club secretaries, unhinged experiments and Kenny Everett. And which tells, in a strange new way, how John, Paul, George and Ringo charmed the world with their in-jokes and irreverence, and how they slowly fell apart, while keeping up a festive front. Words: John Robinson

For The Beatles, Christmas didn’t just come once a year – in December 1963, it arrived on no fewer than 30 separate occasions. A few weeks earlier, the group had lined up behind a barricade and shaken hands with fans at a convention in Wimbledon. Now, at shows supported by Cilla Black, The Fourmost and Billy J Kramer, they proved to be the gift that kept on giving.

Rather than a pure rock’n’roll event, the two-shows-a-night, 16-night stand that their manager Brian Epstein arranged for them at London’s Finsbury Park Astoria in December was all about displaying Beatle-related versatility at the festive season. NEMS Enterprises, newly moved to the capital, was not, after all, solely The Beatles’ management office, but an outfit that nurtured the careers of a wide roster of talent. Nor, in turn, were these simply pop stars – they were personalities, rounded entertainers, such as you might see on television.

“We didn’t just play the songs,” remembers Billy Hatton from The Fourmost. “The Beatles did some routines, we did some of our impersonations – to prove the versatility of the Liverpool fellers.”

As conceived by their director, Peter Yolland, the shows were “to change the concept of the pantomime”. In practice, they were a difficult fusion of theatre and rock’n’roll. The sets were wobbly, and the glittering performers’ rostrums so unstable they occasionally cut the power cables. Into this chaos then periodically emerged The Beatles, performing sketches in advance of their closing 30-minute set. The one sketch everyone remembers was one in which John Lennon (as the villainous “Sir Jasper”) tied a helpless damsel (George Harrison) to the railroad tracks.

“It was obvious it was the first time The Beatles had done anything like that, but they did it well,” remembers Peter Langford from The Barron Knights, who were on the bill backing Cilla and compère Rolf Harris. “The crowd could see the movements. But because of the screams it was impossible to hear what was going on.”

Screams, however, were inevitable. The Christmas shows rounded off a year that had seen Beatlemania spark with the August release of “She Loves You”, and catch light with the band’s October appearance on Sunday Night At The London Palladium. By the time John Lennon had told rich guests at the Royal Variety Performance to rattle their jewellery in early November, the phenomenon was out of control.

For Brian Epstein, whose theatrical ambitions led him to produce Alan Plater’s play Smashing Day, and even to buy a London theatre, the Saville, the Christmas shows were a vindication of his belief not just in The Beatles, but in a certain type of Beatles, positioned at the very heart of the mainstream.

He had seen the characterful, showbiz-appropriate charmers under the scowling leather-clad rockers, and now delighted in revealing them to the world. Wobbling scenery, screams, Rolf Harris and all, the Christmas shows (another followed in 1964) allowed Beatles fans to have as full an experience of the band’s characters as possible. They also showed the wisdom in Epstein’s central conviction: if he added professionalism to their abundant charm, nobody would be able to resist them.

“When they first started out their humour was very insular,” says Billy Hatton. “They used to have jokes, but they were in-jokes. They broadened it out – they were trying to improve themselves.”

It would not always be practical for them to play Christmas shows, but reaching out to their fans at this time of year would always be a responsibility The Beatles took seriously. Even when there was barely a Beatles to do so.