Deep Purple on “Black Night”: “We thought the whole thing was a waste of time”

How an old blues riff, played “good and drunk” after a pub booze-up, became a huge 1970 hit 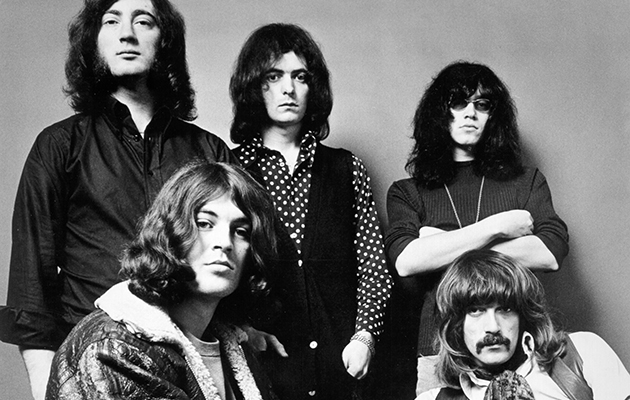 Useful with a guitar, yes. As the 1960s turned into the 1970s, however, Ritchie Blackmore, Deep Purple’s tremolo arm-riding lead guitar genius, had discovered another weapon of choice with which he was no less effective – the catapult. While Deep Purple made their leap from garage rock singles sensation (the so-called “MKI” line up) to the free-roaming heavy rock of their classic “MKII” formation, Blackmore, from the passenger seat of the band’s Bentley, would play havoc with the public.

“On the way to a gig, we’d stop at the greengrocer’s and get a load of gooseberries, so that Ritchie could shoot them at passers-by and people cleaning windows,” explains bassist Roger Glover, himself soon sucked into the enigmatic guitarist’s pastime. “The fashion caught on, and we all got catapults and gooseberries. We were like a tank, protected on all sides, gooseberries flying.”

Their fruit missiles dispatched, on arrival at their gigs, Blackmore and his rejuvenated lineup of Deep Purple (old hands Jon Lord – keyboards and Ian Paice – drums), joining new boys Roger Glover (on bass, replacing Nicky Simper) and Ian Gillan (on vocals, replacing Rod Evans) to display an aptitude for a different kind of resourcefulness. Playing a mixture of “MKI” songs and new material fresh from their rehearsal room at Hanwell Community Centre in west London, Purple MKII were charging towards their mission statement: the hairy, improvisational and very heavy rock’n’roll of Deep Purple: In Rock, and its lead-off single, a rather leaner, but no less heavy proposition called “Black Night”.

“The simplicity and the inspiration of it are the important thing,” says drummer Ian Paice, some 42 years on from their No 2 hit. “The lyric was simple, the riff was catchy. The drumming was ridiculous. You can’t plan it. That moment of creativity had to be like that – it was that moment in time…”

IAN GILLAN: I was in a band called Episode Six with Roger Glover, which was more of a harmony band, really. At one gig, there were a few dodgy characters leaning up against the wall of the venue – and we ended up joining their band. Purple was the talk of every musician in the country – they had something new and very exciting.

ROGER GLOVER: My first impression of them was that they all had new clothes on. I wasn’t very wealthy at the time, which is an understatement. I was also impressed with their look: they had a dark look about them which I didn’t like at first, a bit dangerous. But when I met them, they weren’t like that at all. Apart from possibly Ritchie.

GILLAN: They were rich, and their hairdos were pretty scary – someone had put some work into them; they were organised. I remember my first meeting with Ritchie, I had a lousy cold and all my tissues fell out over the floor, I felt about two feet tall.

IAN PAICE: Looking back, there was a feeling that where Jon, Ritchie and I were going, Rod, as a vocalist, couldn’t come with us. He had a nice voice, but a balladeer’s voice, so he was pushing reality when he had to sing hard songs. Nicky was happier with what had come before, than with what was coming. It’s not a put-down because he was a fine bass player and a lovely bloke, but through the course of a lot of gigs, a year’s touring, you could see three of us moving in one direction, with one who couldn’t come with us, and one who didn’t want to. The only solution was to freshen it up, and get people who could do it, who were a bit more open-minded.