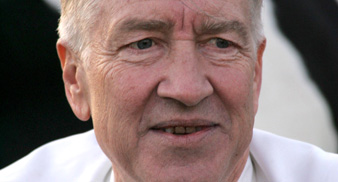 I was blown away the first time I ever saw a Lynch film – Blue Velvet at the Sutton Odeon, back when I was 17 – and I’ve been a fan since. I devoured every episode of Twin Peaks (I even stand by the, um, fallow Second Series), and I’m the only person I know who ever saw – let alone loved – On The Air, his short-lived sitcom about a struggling TV network set in the 1950s. Two of his last three films – Lost Highway and Mulholland Drive – have been among the best of his career, woozy, beguiling noirs that remind us why Lynch is still a vital force in cinema.

I have to admit that his new film, INLAND EMPIRE, hasn’t grabbed me with quite such urgency. Still, it’d be wrong to turn down the opportunity to see the great man take part in a rare Q+A session at London’s National Film Theatre.

Lynch at 61 still looks great. That quiff, grey shot with nicotine yellow, is magnificently intact, though his right hand jittered throughout. Maybe jet lag, or coffee jag? I’d hate to think it’s anything worse. The opening five minutes found Lynch extolling the virtues of Transcendental Meditation, his great love. Fortunately, once that was out of the way, we could talk about the movies. Well, sort of. He comes across like Gordon Cole, the FBI Chief he played in Twin Peaks – affable but slightly befuddled, like he’s just woken up. He’s smart, though, doing a spectacular job of sidestepping any questions about specific aspects of his movies. One typical question, about his use of drapes and chequered floors, most notably in Eraserhead and Twin Peaks, was answered with: “I just like drapes and chequered floors.”
Thanks, David…

He did talk, though, about Sandy’s speech about her dream in Blue Velvet, how proud he is of it. He spoke about the darkness in his films, where Frank Booth came from… And his coffee. Yep, the man who put the phrase “Damn fine cup of coffee” into the national consciousness has launched his own brand of java. “It’s all in the beans… and I’m just full of beans.”