Collaborators, historians, collectors and fans gather in Liverpool to celebrate his genius at the David Bowie World Fan Convention 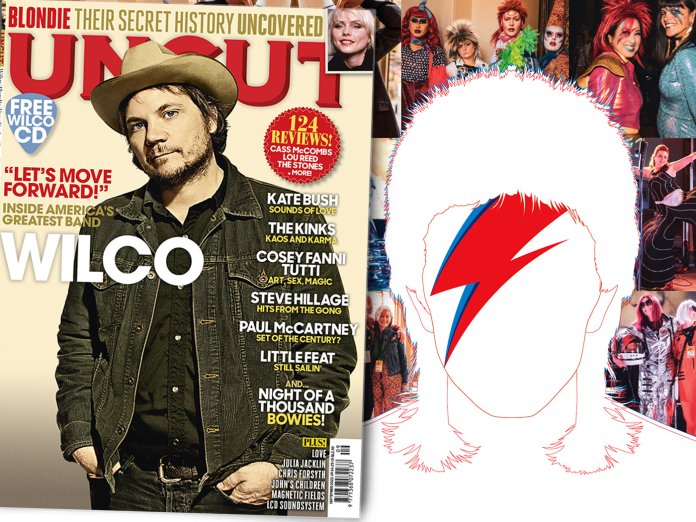 To mark the 50th anniversary of Ziggy Stardust, collaborators, historians, collectors and fans congregate in Liverpool for a weekend of communion, remembrance and celebration. Stephen Troussé finds that, six years after his passing, David Bowie’s afterlife might turn out to be his most intriguing adventure of all…

Enjoy this excerpt from Stephen’s piece, which appears in the latest issue of Uncut magazine – in UK shops from Thursday, July 21 and available to buy from our online store.

Ziggy Stardust is alive and well and teetering up the steps of St George’s Hall in Liverpool. The old starman looks pretty good for 50: whip-thin in scarlet leather and platforms, crimson cockscomb proudly erect, the 1973 forehead flash the only odd anachronism. We follow him up the steps and into the madly ornate, neo-Grecian hall. Naturally, he has timed his entrance to perfection. The mirrorballs are twinkling, the crowd is expectant, and up in the loft the organist is playing Mick Ronson’s magnificent orchestral coda to “Life On Mars”.

But something’s awry. At the bar, there are three or four other Ziggys, patiently queuing for plastic beakers of Heineken. Around the hall, a rum selection of Thin (and not-so-thin) White Dukes. There are a couple of Major Toms, in spacesuits clearly not designed for sultry midsummer nights on Merseyside. There’s a dainty Pierrot queuing for
the ladies, one terrifying New Romantic nun escaped from the “Ashes To Ashes” video, and a frankly sensational late-period Ziggy in light-up Kansai Yamamoto kabuki trousers. For one particular 10-year-old Duke it’s clearly all too much, and he’s led from the hall in tears by a paternal Aladdin Sane.

The Bowie Ball is the cracked cosplay centrepiece of the first ever David Bowie World Fan Convention, hosted by Dave Pichilingi of Liverpool Sound City and curated by Andy Jones and Nick Smart, co-editors of the David Bowie: Glamour fanzine. Over the course of a long weekend in mid-June, thousands of devoted Bowiephiles from across the world have descended upon Liverpool to hear from the man’s collaborators (Carlos Alomar, Robin Clark, Gail Ann Dorsey, Donny McCaslin, Woody Woodmansey, John Cambridge all hold court to packed, rapt audiences) biographers, photographers, designers and academics.

The convention is the most vivid instance yet of David Bowie’s miraculous afterlife, but throughout the summer of 2022, his continuing schedule puts the living to shame. Over the weekend, fans gossip about Brett Morgan’s forthcoming documentary Moonage Daydream. Worlds Inc – who created the first, now fetchingly quaint, online Bowie World in 1999 – announce the drop of their Bowie NFTs, part of a Bowie metaverse “where augmented reality, cryptocurrencies, blockchain and non-fungible tokens have emerged as disruptive forces reshaping areas as diverse as music, gaming, sports, fine art collecting and shopping”.

PICK UP THE NEW UNCUT FOR THE FULL STORY