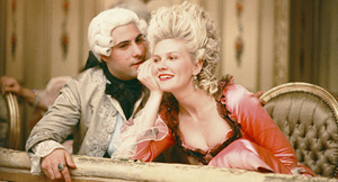 Just screened in Cannes to a lukewarm reception, Sofia Coppola’s follow-up to her Oscar-winning romantic comedy Lost In Translation is a much less heavily stylised or adventurous film than many fans of the chic young auteur will be expecting. Although trailed as a “glam rock” period drama with a soundtrack full of post-punk and indie-rock luminaries, Marie-Antoinette offers a fairly straight and conventional portrait of the spoiled young Austrian princess who endured a lonely arranged marriage to Louis XV (Schwartzmann), then an untimely guillotine death in the aftermath of the French Revolution.

But the principle problem with Marie-Antoinette is its fundamental lack of drama. Coppola concentrates on the gossipy, bitchy, inward-looking comedy of court life in Versailles at the expense of any wider social or historical context. She even ends the film before her heroine’s bloody demise. The result is a disjointed, poetic character sketch which, at over two hours, feels like a missed opportunity.
There may be a passionate, innovative, politically and emotionally charged film to be made from Antonia Fraser’s acclaimed revisionist biography of the teenage dauphine. But sadly Coppola’s muted, modestly enjoyable mood piece gets lost in translation.