An Audience With Patti Smith

“I feel like a stand-up comic who’s not getting any laughs,” says Patti Smith self-deprecatingly, as she presents a playback of her new album, Banga, to a specially invited audience in London. This is the first time anyone has listened to the record, she tells us – not even the band or Patti's record company have yet had the privilege of hearing it. The venue for this auspicious event is the old Scotch Of St James club in Mayfair, the principal hang out for Swinging London’s finest. 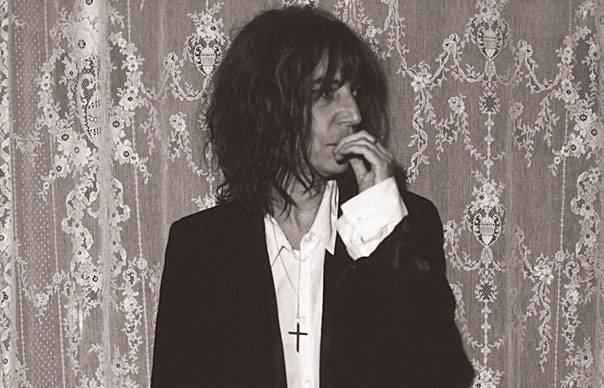 “I feel like a stand-up comic who’s not getting any laughs,” says Patti Smith self-deprecatingly, as she presents a playback of her new album, Banga, to a specially invited audience in London. This is the first time anyone has listened to the record, she tells us – not even the band or Patti’s record company have yet had the privilege of hearing it. The venue for this auspicious event is the old Scotch Of St James club in Mayfair, the principal hang out for Swinging London’s finest. The Jimi Hendrix Experience played their first UK gig here, and Patti is keen to flag up her own connections with Hendrix: “This album was recorded at Electric Lady Studios,” she explains. “It’s the same studio where we recorded [Smith’s debut album] Horses. I’m even wearing an official Electric Lady t-shirt…”

Patti thrives off these kinds of connections. As she talks through the stories behind each of Banga’s 12 tracks, it becomes clear that many important symmetries, references and associations resonate through the album – among them, the lives and achievements of artists, explorers, A-list film stars, emperors and saints. The June 5 release date for Banga, Patti acknowledges, also happens to be the same date that she released her first single, “Piss Factory”, and the birthday of the Spanish poet, Federico García Lorca. Furthermore, Banga, she highlights, is named after a dog in the novel The Master And Margarita by Russian author Mikhail Bulgakov. “You might say, why name an album after a dog?” she asks rhetorically. “I dunno. I like dogs. I can’t really have one in New York, so I compensated by naming my album after a dog.”

Meanwhile, the album’s second track, “April Fool”, connects to the April 1 birth date of another Russian, this time Nikolai Gogol. There’s a further birthday connection on “Nine”, which nods to the June 9 birth date of Patti’s friend Johnny Depp. “The song was a birthday present to Johnny,” admits Patti. “I went to visit him in Puerto Rico when he was filming The Rum Diary. It was his birthday and I didn’t have a present, so I wrote him a song.” Depp himself appears on the album’s title track, along with Patti’s son Jackson, who delivers an impressive impression of a dog.

As you might imagine, Patti’s stories are often marvelous. There are little asides that leave you wanting more – about the track “Maria”, for instance, Patti says it was written about the actress Maria Schneider, who died last February: “She was friend of mine in the Seventies. I’m not prone to nostalgia, but this is about the feel of that time. When we recorded Horses, Maria traveled with us for a while.” But the best story of the night hangs around a ballad called “Seneca”. Ostensibly a lullaby for her godson, Seneca Sebring, the song was written during a trip on board an Italian cruise ship in the company of her long-term guitarist Lenny Kaye and the film director, Jean-Luc Godard. Godard, it transpires, invited them to cameo in his 2010 movie, Film Socialisme. Patti recalls spending 10 days “with 3,000 raging Italians” taking in the sights of Alexandria and Cyprus along the way. For the punch line, she reveals that boat was the cruise ship Costa Concordia… which made headlines in January when it sank off the coast of Tuscany.

Indeed, it seems that Patti has a story for everything. “Amerigo” is named after Amerigo Vespucci, the Italian explorer after whom America is named. The song is a co-write with bassist Tony Shanahan, who taught her how to sing in a proper key. “That famous nasal sound I have,” she says, “it’s just a Jersey girl singing in the wrong key.”
“Fuji-San”, is “a rock’n’roll prayer for the people of Japan after the tsunami… To ask Mount Fuji to look after the Japanese people.”
As she told me at the end of last year when I spoke to her for our 2012 Album preview, “This Is My Girl” was written in the wake of Amy Winehouse’s death. “She was the same age as my own children,” Patti acknowledges tonight. “It was a song I wish we didn’t have to write.”
The storming free jazz happening of “Tarkovsky” is “a jam off a Sun-Ra phrase, ‘The Second Stop Is Jupiter’. My son Jackson is on it and my daughter Jesse plays piano. It’s named after Andrei Tarkovsky’s film, Ivan’s Childhood, the most beautiful movie about war.”
The album’s centrepiece is a sprawling, impressionistic improvised track called “Constantine’s Dream”, which references the Holy Roman Emperor Constantine, Renaissance painter Piero della Francesca and Christopher Columbus. After Lenny Kaye laid down his improvised backing track, Patti “studied, thought and then improvised a vocal… It’s about the environment, materialism. I thought about St Francis of Assisi, who was such a beautiful person.”
The album closes with an understated cover of Neil Young’s “After The Goldrush”, whose eco-themes refer back to Patti’s meditations on “Constantine’s Dream”. She’s unusually cagey about the track, though she admits Young hasn’t heard it yet.

The playback over, Patti gets a little emotional – “it’s like letting children go,” she sighs with a snuffle. She apologises, too, for a glitch on the CD that meant “Seneca” skipped. “They asked me if I could put the album on an iPod,” she deadpans, holding up the CD. “But I didn’t think it would fit. I guess I’m just a little behind the times…”

Banga is released by Sony on June 5