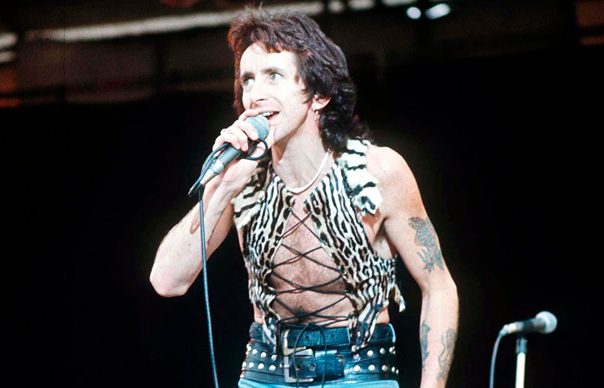 The band shared a house in a seedy area of Melbourne that quickly became a mecca for party animals. Shenanigans found their way into Scott’s lyrics – comic-book tales of sex and excess, like “Whole Lotta Rosie”, about a Tasmanian groupie, or “Big Balls”, with its touching refrain “bollocks, knackers, bollocks, knackers”. Although AC/DC’s approach was to never take themselves too seriously, Scott excelled at writing about being in a band, capturing frustrated ambition on breakthrough single, December 1975’s “It’s A Long Way To The Top (If You Wanna Rock’n’Roll)” – one of the few rock songs to feature a bagpipe solo. “Bon was a street poet – he described it as ‘toilet wall’ poetry,” says Browning. “That was unknown. They signed a singer and got a lyricist, as well.”

When bassist Mark Evans joined in March ’75, AC/DC were a band in transition. “We did TNT, Dirty Deeds… and Let There Be Rock in the space of 15 months, and there was a big change in that time,” he says. “When I joined they wanted me to wear a red satin suit. I said, ‘If my mates see me they’ll punch the crap out of me!’ Malcolm was keen on T.Rex and took us to see The Glitter Band. We all liked Slade. Later, we got more into Free and the Stones. Bon was nuts about Alex Harvey.”

AC/DC were regulars on Australian TV’s Countdown – one appearance in 1975 saw them play “Baby, Please Don’t Go” with Scott dressed as a schoolgirl. “We attracted teenage girls at an all-age show or skinheads in a pub,” says Evans. “We didn’t find our real audience until we went to London [in 1976] and began playing to guys with long hair and denim.”

The band broke attendance records during a residency at the Marquee. In 1977, Let There Be Rock reached the UK Top 20, and AC/DC spent their time between Europe and Australia, with trips to the US in an attempt to crack the market. Bon was still drinking heavily, though other temptations were available.

“I never saw Bon take hard drugs but he did OD in Australia,” confirms Evans. “He didn’t take hard drugs on a regular basis but he dabbled. It put the wind up [co-producers] George [Young] and Harry [Vanda]. They’d spent a long time round Stevie Wright and he had a shocking time with heroin.”

All the same, Scott remained a valued part of the songwriting team. “Malcolm and Angus had the ideas,” explains Evans of the albums he cut with the band. “Songs were written in the studio between Malcolm, Angus and Bon. We’d spend a week on backing tracks, then a week on vocals and guitar solos.”

In 1979, Tony Platt was asked to mix AC/DC’s seventh album, Highway To Hell. At the time, Young and Vanda had relinquished production duties and sessions for the LP took place under the auspices of ‘Mutt’ Lange at Roundhouse Studios in London. “They wanted a solid English rock sound,” explains Platt. “I’d worked with Led Zep, The Who and Free, so I was used to highly proficient bands that lived hard but also worked very hard. The record was made on tea and B&H. The first time I met them, Bon made me a cup of tea. He was superb. When he sang, you believed him. The Youngs ran the band, but Bon was allowed to plough his own furrow. There were stories about him disappearing at the end of one gig and reappearing just in time for the soundcheck at the next. Malcolm once told me, ‘The thing with Bon is, it doesn’t matter what he does, he always turns up.’ You got the impression he was resilient.” Highway To Hell was AC/DC’s biggest album so far. It reached the Top 10 in the UK. Even better, it made No 17 in the US. The band planned to head to the Bahamas to record the follow-up. Bon Scott’s moment had finally arrived.

On February 20, 1980, Scott was found dead. He had spent the previous evening drinking heavily in the Music Machine, a club in Camden Town. “I saw the guys in Sydney and I was taken aback,” says Evans, who left the band in 1977. “They’d been hit really hard, but the way they conducted themselves and got on with it, I have the utmost respect.” After some deliberation, AC/DC replaced Scott with Brian Johnson, who Scott had once recommended to the band. Johnson’s first job was to record Back In Black – with title, cover and opening funereal bell conceived in tribute to Scott. It went to No 1. “The band had done so much hard work and earned a lot of respect,” explains Evans. “They were primed to go. It all made sense.” The tragedy was that Scott wasn’t around to enjoy it. “Bon had amazing charisma,” says John Bisset.

“A lot of musicians are arrogant and negative, Bon didn’t have an ounce of that. He was well-equipped to handle fame. He should have gone on for a long time.” Mark Evans agrees, “Everyone loved him. He was a gentleman, fun-loving, great to be around. The public persona was this crazy guy, but that was only part of it. What hastened his departure is that he felt a responsibility to be Bon Scott, to live the rock’n’roll lifestyle he sang about.”