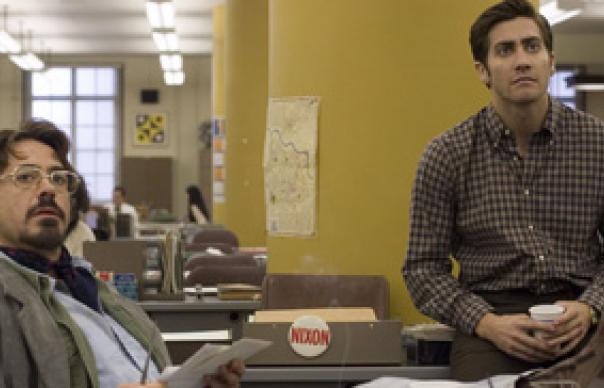 San Francisco 1969: the city is terrorised by a spree of motiveless murders, for which the self-proclaimed Zodiac takes responsibility with a series of cryptic messages. Detective Dave Toschi (Ruffalo) and newspaperman Paul Avery (Downey Jr) are frustrated in their investigations, but Chronicle cartoonist Robert Graysmith (Gyllenhall) dedicates a decade of his life to tracking down the killer.

In the five years since his last film it’s seemed like David Fincher, now 40, has stalled trying to work out what enfants terribles are supposed to do for an encore. Panic Room, his most recent outing, certainly felt like a dead end – a ruthlessly elegant entertainment in itself, it still felt a long way from the livewire brilliance that crackled through Seven and Fight Club.
And so he’s cast around for the right project. At various points he’s been linked with the Mission: Impossible franchise, the Black Dahlia adaptation and even skateboarding movie Lords Of Dogtown. What finally seems to have drawn him to Zodiac is a personal connection: Fincher was a schoolboy in Marin, North California in the late 60s when the eponymous serial killer taunted the area’s police and media with a series of encrypted notes claiming responsibility for a spree of motiveless killings and announcing his intention to take out an entire school bus.

The biographical link hints that Fincher felt ready to take a more mature, responsible approach to the powers of horror that detractors suggest he cynically if stylishly exploited in Seven. Zodiac often feels like an apologetic corrective to the earlier film: in place of the grungy, non-specific American Purgatory there’s an obsession with the every day textures of late-60s San Francisco, in place of breathless rooftop chase scenes there’s the frequently humdrum futility of police procedures, and instead of the creepily charismatic evil mastermind, there’s a pervading sense of the real banality of evil.

The result is an odd film, torn between the desire to be respectable and Fincher’s more loopily lyrical urges. In many ways Zodiac is an homage to a certain conscientious strain of 70s cinema – most obviously Pakula’s Watergate adaptation All The President’s Men, but also the films of Sidney Lumet: Serpico, Dog Day Afternoon, even Network. Yet when it leaves the cop shops and newsrooms, it presents a California of lakesides and pastures that has rarely looked lovelier. A shot of the Golden Gate bridge seems to ascend all the way to heaven – or are those clouds the fog of unknowing that envelop the case? And Fincher can’t resist having some wicked fun with the lurid conventions of thriller – you will certainly never hear Donovan’s “Hurdy Gurdy Man” the same way again.

And the cast is often brilliant: Robert Downey Jr has a ball as Paul Avery, crime reporter and deadpan dandy of the Chronicle, while Mark Ruffalo broods with bravado as Dave Toschi, the real-life detective who inspired such cinematic mavericks as Bullitt and Dirty Harry.
But the problem with the film is its focus on Robert Graysmith, portrayed by Jake Gyllenhall. Originally a cartoonist with a passion for puzzles, Graysmith got caught up in the case as it buzzed around the newspaper offices, his natural curiosity blooming into full-blown obsession as he pursued the paper-trail of evidence long after the professionals had given up (or in Avery’s case, given in to their addictions).

Maybe Fincher has some fellow feeling for a man who leaves the cartoon world to investigate the real crimes around him – but Graysmith is an odd fish to base a film upon. “There’s more than one way to lose your life to a killer,” runs the tag line, and you watch as the dossiers pile up, edging out his girlfriend (Chloe Sevigny seemingly doing a dowdy Gwyneth impression) and his kids in his small apartment. But you never get an insight into his motivation – is it a passion for justice, a hunger for fame, simple parental concern? You get the sense that Gyllenhall is also struggling with these questions. The film covers ten years of investigation, but the character doesn’t seem to grow, or even age very much. In the end you’re forced to conclude that it’s simply his nerdy determination to finish a jigsaw – in which case you wonder why he didn’t simply settle for a particularly taxing Suduko session.

The film deliberately frustrates demands for an easy, satisfying answer – as in life, dead ends, red herrings, false trails proliferate. And you have to give Fincher credit for facing the mature challenge of trying to dramatise this dispiriting truth. All the same, you get the sense of a talent kept on the leash, the irresponsibly flash kid struggling to escape from the middle-aged concern. Fincher’s next film – The Curious Case Of Benjamin Button – concerns a character who ages backwards; maybe there’s still time for that youthful brilliance to re-emerge.