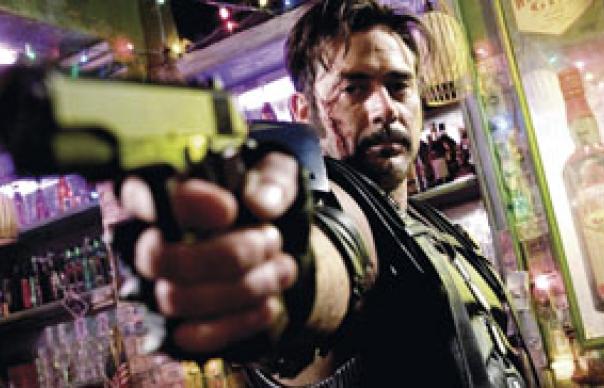 In an alternate 1985 where superheroes exist, ageing hero The Comedian is killed. His former accomplices come out of retirement to investigate his murder, but it soon becomes apparent that there’s a wider conspiracy at work. When American superhero, Dr. Manhattan – the most powerful man on Earth – is framed for several deaths and escapes to Mars, the Cold War begins to look as if it might go nuclear…

When Alan Moore wrote Watchmen in 1986, he was famously shooting for “the Moby Dick of comics” – a dense, allusive summation of the medium. For superhero comics, at least, he succeeded, and, along with Frank Miller’s Batman reboot The Dark Knight Returns, Watchmen helped legitimise comics as an adult artform. In Hollywod, too, we’ve seen superheroes upgraded from cheap TV shows to A-list franchises, attracting such unlikely prestige directors as Tim Burton (Batman and Batman Returns), Ang Lee (Hulk) and Christopher Nolan (The Dark Knight). Frank Miller has also made the jump from comics to movies, co-directing his own Sin City series with Robert Rodriguez, though falling disastrously on his face with the recent adaptation of Will Eisner’s The Spirit, which he wrote and directed.

Moore, on the other hand, has kept his distance from Hollywood. To be frank, the movies have not been kind to him. From Hell, V For Vendetta and, most conspicuously, The League Of Extraordinary Gentlemen didn’t serve their source material to the fullest, and Moore’s response was to refuse both credit and payment for all future adaptations of his work.

Quite what he’ll make of Watchmen is anyone’s guess. With its layered, complex plotting and forensic attention to detail, it’s long been considered an unfilmable project, as various directors down the years (including Terry Gilliam and Darren Aronofsky) have discovered. But it’s Zack Snyder, who filmed Frank Miller’s 300, who’s finally had a pop. Which begs the question: after nearly a quarter-century of inspiring and fascinating Hollywood, just how radical, and relevant, does Watchmen seem now?

As with 300, Snyder has treated Moore’s comic as Holy Writ, retaining its 1985 setting, and using the series’ original artist Dave Gibbons as an advisor. Watchmen certainly provides him with a rich Rogues’ Gallery. The first “hero” we meet is Edward Blake, aka The Comedian (Jeffrey Dean Morgan, resembling a dead-eyed Robert Downey Jr). A big, sixtyish man going to seed, he’s attacked by a mystery assailant, easily beaten despite his powers, and tossed through a plate-glass window to his death. In a bravura title sequence as Dylan’s “The Times They Are A’Changin’” plays, the back-story of The Comedian’s superhero tribe is then sketched in – from innocent, robber-grabbing good guys in the ‘40s, to hunted outsiders in the McCarthyite ‘50s, and despised government stooges since the ‘60s. That’s The Comedian skulking behind the Grassy Knoll in Dallas, 1963 ; another super-being, Dr. Manhattan, is waiting on the moon to greet Neil Armstrong. Later, we see them both stalking the jungles of Vietnam, effortlessly turning the enemy to ash. In this super powered twentieth-century, hippie flower children are shot en masse. By 1985, with Dr. Manhattan as his ultimate nuclear deterrent, Nixon is settling in for his fifth term. We might wonder, are superheroes our protectors, or our oppressors? As Dylan sings on “Desolation Row” (quoted by Moore in the comic, and butchered here by My Chemical Romance): “Now at midnight all the agents and the superhuman crew/ Come out and round up everyone that knows more than they do…”

Incineration and assassination aren’t The Comedian’s only crimes. There is also attempted rape, and the murder of a pregnant woman. But, nevertheless, it’s his death that launches the plot of Watchmen. It’s investigated by the vigilante Rorschach (Jackie Earl Haley), who Snyder introduces as the masked equivalent of Travis Bickle, stalking New York (“the streets are extended gutters…the vermin will drown,” he grunts). Snyder indulges his brutality more than Moore. But it says much about the complexity behind each character that Rorschach – for all his sociopathic behaviour – eventually becomes Watchmen’s moral compass.

We might empathise better with the more recognisably human figures of Dan Dreiberg (Patrick Wilson) and Laurie Jaspeczyk (Malin Akerman), retired superheroes drawn back into their old crime-fighting ways as Night Owl and Silk Spectre. But not, it seems, by altruism, but because it turns them on, following another first: superhero impotence. And two far more powerful figures meanwhile lurk in the background: Dr. Manhattan (an unrecognisable Billy Crudup) and Ozymandias (Matthew Goode), who both play shadowy roles in the Cold War.

Snyder has faithfully shoehorned in Moore’s entire plot, even promising Watchmen’s pirate yarn, Tales Of The Black Freighter, as an upcoming DVD Extra. And while he rarely exercises the iron structural control that was a principal asset of the comic, there are grand flourishes. Big pop songs are boldly used – Simon & Garfunkel’s “The Sound Of Silence” at the Comedian’s New York funeral (the Twin Towers kept carefully in shot), Cohen’s “Hallelujah” during a sex scene, and, rather bizarrely, Nena’s “99 Red Balloons”. Snyder also attempts to replicate some of Moore and Gibbons’ obsessive attention to detail. There’s a poster glimsped for Ozymandias’ African food drive in the year of Live Aid, the way Nixon, himself looking like a super-villain, hunkers down in his bunker waiting for the end of the world, and a snatch of 1960s TV classic The Outer Limits, an episode of which partly provided the inspiration for Moore’s finale. The violence comes hard and, as is seemingly a contractual obligation these days, is mostly shot in slow-motion. Moore’s grim conclusion of what a world with superheroes would really be like can be found in one scene, where gangsters set out to “test” Dr Manhattan, and all that’s left after he’s finished with them are their intestines dripping from the ceiling. When the high style drops, though, Watchmen is just men and women in tights, talking. This might have worked in comics, but it can look faintly ridiculous on the big screen.

Watchmen bravely grapples with big ideas more traditionally suited to high-end sci-fi. Alongside M. Night Shyamalan’s Unbreakable (2000), it’s a thoroughgoing attempt to deconstruct a genre Hollywood has happily swallowed whole. You may frequently wonder why Snyder has bothered. But if you want a slavish, often exciting screen translation of Moore and Gibbons’ landmark, here it is.