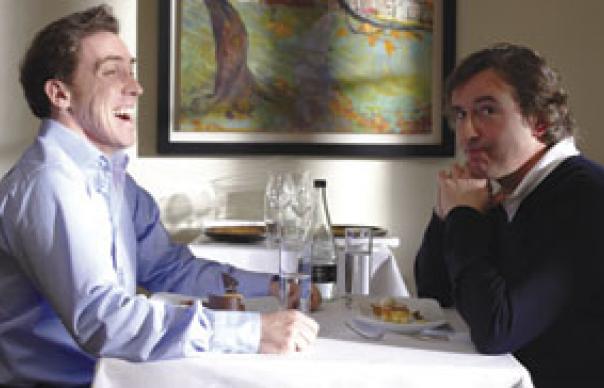 There’s a moment during The Trip that recalls the contemptuous, conflicted comedy of Woody Allen’s Stardust Memories. It’s a dream sequence in which Steve Coogan is approached by a fan who, after the inevitable greeting (“a-haaaa!”), asks for an autograph and then cheerfully calls his hero a “cunt”. Coogan wakes with a start, realising that the toxic mix of fascination and frank disdain conveys precisely how he feels about the stagnant state of his own career.

The Trip is many things – bumbling B-road movie, awkward bromance, nature porn – but its primary purpose is to satirise Coogan’s vision of himself as a tortured, much misunderstood artist. Thematically, it’s an extension of A Cock And Bull Story, Michael Winterbottom’s 2005 feature in which Coogan and Rob Brydon appear as sparring actors jockeying for status. They’re at it again in this similarly metatextual exercise, also directed by Winterbottom, in which they play semi-fictionalised versions of themselves, thrown together when Coogan is commissioned by The Observer to review six up-market restaurants in the north of England. When his on-off girlfriend, Misha, decides to return to America, he invites Brydon instead.

Over six improvised half-hours – which Winterbottom has also shaped into a 100-minute film for US release – the pair eat, drink, ramble (in both senses), sing, squabble and shamelessly compete like two rutting comic stags. Dessert wouldn’t be dessert without a Michael Caine face-off and a volley of brisk smack-downs. When Brydon launches into the inevitable Alan Partridge impression, Coogan snaps back: “I’d love to quote your own work back at you, but I don’t know any.”

Coogan’s PR compares them to Boswell and Johnson, but which is which? The Trip makes merry work of the pair’s recent contrasting fortunes. Despite branching into mainstream movies, Coogan is still best known for playing Partridge and leading a tabloid-friendly private life. By contrast, his one time protégé has enjoyed a buoyant few years. Gavin & Stacey, a talk show, and a seemingly open invitation to impersonate Ronnie Corbett on numerous panel programmes all suggest a man who has mastered the art of ubiquity.

Where Coogan was once top dog, now it’s Brydon who gets recognised in public and repeatedly asked to do his ‘Small Man In A Box’ voice. He cheerfully complies while his friend sneers at the tawdry populism of it all. The Trip finds much humour – and some tenderness – in Coogan’s lofty artistic aspirations. Portrayed as uptight and emotionally distant, he craves gravitas, US success and an art-house film career. “I’ve got an albatross around my neck and it’s got the face of Michael Sheen,” he cries at one point, cranking up Joy Division’s “Atmosphere” on the car stereo.

Brydon, on the other hand, is a chattering cipher who filters the world through a small repertoire of impressions, jabbering away as Alan Bennett or an “autistic Al Pacino”. In contrast to Coogan’s complicated existence, he’s a contented family man who recognises showbiz as a mere bagatelle. He’s trying to keep himself amused until he can go home.

Nothing much happens. From hotel to hotel and location to location, the pair skim the surface of music, film, poetry, life and love. Coogan beds a couple of passing fancies, smokes dope in Coleridge’s old house, and ponders a Faustian pact in which he wins an Oscar but his son gets appendicitis (“Now we glimpse the real man,” thunders Brydon). Some of the improv is wonderfully Tap-esque: “Never be hot, always be warm,” is Brydon’s sage career advice. “I’d rather have moments of genius than a lifetime of mediocrity,” replies Coogan. “I’d rather be me than you.”

The Trip fits neatly into the post-Curb Your Enthusiasm landscape, where everything from Entourage to I’m Still Here features celebrities playing distorted versions of themselves, but it’s much gentler and more hypnotic than those references might suggest. Delightfully daft but with moments of real poignancy, The Trip edges toward some quietly profound conclusions on the meaning of success and the value of friendship.
EXTRAS: EPK, set photos, extra sequences.
HHH
GRAEME THOMSON