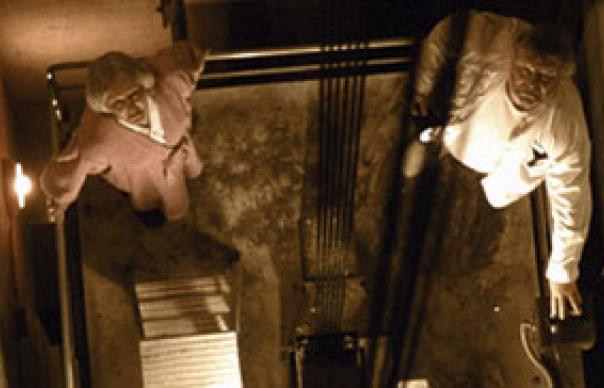 When Lars von Trier created his TV mini-series The Kingdom in 1994, he wasn’t yet the Antichrist of international art cinema. Breaking The Waves hadn’t established him as cinema’s foremost tormenter of women; the aesthetic puritanism of the Dogme 95 manifesto was still to be unveiled; and his status as world cinema’s foremost prankster was still barely a rumour outside his native Denmark. Today, the world knows von Trier as an arch-stirrer who’s as likely to shock audiences with on-screen clitoridectomies as he is to get himself slung out of the Cannes Film Festival for a facetious monologue about being a Nazi.

But back in 1994, von Trier – then best known for his hallucinatory feature Europa – was still enough of an outsider to be able to work under the radar, as he did with The Kingdom. This extraordinary TV experiment did for hospital soap what Twin Peaks did for the murder mystery. The show – available here in the full-length broadcast versions of both its four-episode seasons – is set in a Copenhagen hospital built on the site of an ancient ‘bleaching pond’, apparently Denmark’s answer to the Indian burial ground of American horror movies. In its wards and along its darkened subterranean corridors, unthinkably weird scenes take place. A ghostly girl is heard crying in the lift shaft; a phantom ambulance appears every night; a pathologist undertakes a bizarre project of liver cancer research; a doctor runs secret medical supplies; and a Satanic presence (who else but von Trier’s wild-eyed favourite Udo Kier) is about to come into the world.

Directed by von Trier and Morten Arnfred, The Kingdom is one of the most curious shows ever transmitted on mainstream TV – and all the stranger because it contains a tenuous element of documentary. The series was shot in a real Copenhagen hospital, Denmark’s largest and actually known as ‘the Kingdom’. Somehow von Trier persuaded hospital authorities to co-operate with him on this project. Just imagine a British filmmaker getting permission to shoot a series in which a major London teaching hospital, appearing under its real name, was depicted as a hotbed of Masonic conspiracies, supernatural phenomena and indentured incompetence: it’d bring the NHS to the point of collapse faster than David Cameron’s wildest dreams. Yet, astonishingly, this is what von Trier attempted in The Kingdom, apparently to Denmark’s delight and approval.

Unlike Twin Peaks, which ran out of steam early into Series 2, brevity is The Kingdom’s trump card. Shot in austere near-sepia, the series now looks like a visual dry run for the soon-to-be-unveiled Dogme aesthetic, but in terms of von Trier’s output, the feature this most closely resembles is the anomalous office farce The Boss Of It All (2006). The humour is often outrageous, as is the acting – most notably from Baard Owe, as the demented Professor Bondo, and from Ernst-Hugo Järegård as a testy Swedish neurosurgeon, who spends much of his time on the hospital roof showering invective on Denmark.

Indeed, The Kingdom is more fun than just about anything else that von Trier has put his name to. This 4-disc set comes with an intriguing package of material to bolster the von Trier myth, notably the 52-minute 1997 docu Tranceformer, in which the auteur-as-provocateur is already a key theme and in which an alarmingly youthful von Trier boasts of having a “troll’s shard” in his eye which makes him see things strangely. Quite how true this is can be seen from the TV ads included here that he directed for a Danish newspaper which take anti-advertising to inspired lengths.
EXTRAS: Documentaries: Tranceformer: A Portrait Of
Lars von Trier; In Lars von Trier’s Kingdom; behind-the-scenes; von Trier TV commercials; scene commentaries.
Jonathan Romney