After the funeral - the apocalypse. Second coming of Montreal troupe, designed for stadiums and the end of the world 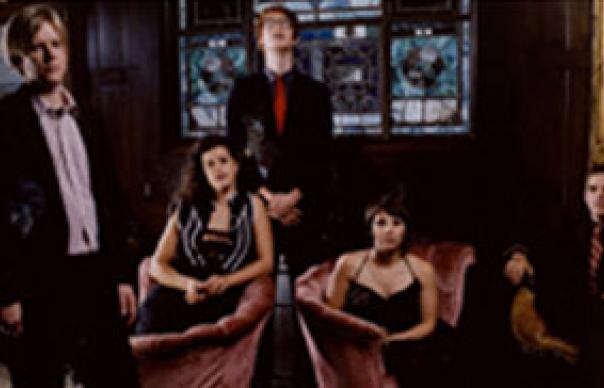 I remember two years ago sitting in a New York office with people I didn’t yet know, listening to two of them talking about an album by a group whose name they didn’t mention, but which – from what I could gather – had been inspired in part by the deaths of people close to the band. I wasn’t surprised, then, when the album under enthusiastic discussion turned out to be called Funeral. Which title, of course, made me think immediately of some brooding meditation on mortality – dark, morose and gloomily intense.

When I actually get to hear Funeral – which turns out to have been recorded by a Montreal-based collective called The Arcade Fire – the album’s far from the drear and draughty thing I’d expected. Funeral instead gave voice to the tumult of dreams and the uproar of life, a rowdy celebration played on a colourful assortment of instruments, Win Butler’s voice skittish above the music’s epic pitch and holler, reminiscent frequently in its baffled wonder and startled apprehension of David Byrne, Talking Heads a clear influence.

It was in the opinion of many – including Uncut – the most thrilling record of 2005. Listening to it, however, you wondered whether it might turn out to be like one of those comets of astronomical legend, whose rare appearance has all appropriate eyes upon it, a brief and brilliant passing, not soon to be repeated. In other words, following Funeral was always going to be difficult for them.

What, after all, were they going to do? Rip up the blueprint entirely, wholly dismantle the sonic template that made them so successful, or just make the same record again, only better? Your first reaction to Neon Bible – whose title is taken from the first novel by American writer John Kennedy Toole, who won a posthumous Pulitzer for A Confederacy Of Dunces after committing suicide at 32 – is that they’ve done neither, nervous about ditching the signature sound of Funeral but unsure what to replace it with.

One immediate point of difference is a drift here towards the oratorical. Funeral, you’d be right to say, was no stranger to the histrionic and overwrought. But there was simultaneously a devilish humour afoot, again much in debt to Byrne’s mix of the familiar and the fantastic. Neon Bible is often merely bumptious by comparison, and preachy, too. This music is set shortly to fill arenas, but you wonder if it wouldn’t be more properly played from a pulpit, such is the general sermonising going on here, Butler much preoccupied by the imminence of catastrophe, some undefined disaster looming that he is keen to alert us to, often at windy length

As far as Butler’s concerned, the world is unequivocally a Bad Place, in which Bad Things happen, the whole kit-and-caboodle ready to blow, a fiery end to all we know a grisly inevitable.
This might be a grimly exciting prospect for a troubled teen polishing a gun barrel to a buffed sheen in a bedroom with blacked-out windows in an American suburb shortly to find itself the centre of unfortunate attention on Fox News, TV anchormen with incredulous hair gravely narrating the day’s unfolding events as bodies are removed from a school cafeteria, police marksmen in key positions on surrounding rooftops.

Anyone else might find their patience somewhat tested by Butler’s dour anticipations, the album’s relentlessly fretful hum.
“I know a time is coming, all words will lose their meaning,” he sings cheerlessly over the tympanic thunder of the sluggish opener, “Black Mirror”, aspiring to the cool grandeur of the Bunnymen’s Ian McCulloch, but sounding more like someone shouting loudly into a fairly stern headwind.

There’s evidence of the demented perkiness of yore on “Keep The Car Running”, but “Intervention” fair buckles under the weight of its own self-importance. The lyrics evoke regime change, war, poverty, the tyranny of religion, starvation, all manner of calamitous doings. It’s a lexicon of legitimate liberal woe, although what precisely Butler is saying about any of these things apart from reminding us that they sadly exist currently escapes me.

The morose title track and “Black Wave/Bad Vibrations” are simply glum, while “Oceans Of Violence” is about as gripping as watching a beard grow until the unexpected appearance of slurred mariachi horns, a moment of incredibly woozy beauty and one of the record’s musical highpoints. Mind you, things as a whole get better in a hurry after this and there follows a quartet of songs that find The Arcade Fire at their most irresistible.

“The Well And The Lighthouse” is a jittery wonder, urgent and compelling. “Building Downtown (Antichrist Television Blues)” is even better, “Maggie’s Farm” re-written by David Byrne, with something of Springsteen’s muscular burliness, “Oliver’s Army” piano flourishes and a headlong momentum that owes a lot to Counting Crows’ “Mrs Potter’s Lullabye”. You have to worry somewhat about the sensibility of anyone in whose pantheon of fear louts on the bus appear to rank alongside terrorists flying jets into skyscrapers, but the track’s climax is handsomely ecstatic.

“Windowsill”, meanwhile, is a simmering classic of incipient calamity – winds a-blowing, waters rising – with another fantastic horn chart and a chorus that unfurls like a flag over a battlefield. The plangent utopianism of “No Cars Go” – reworked from the Arcade Fire EP – rounds out this brilliant four-song suite, building towards another overwhelming climax that’ll have them cheering by the thousands at Glastonbury.

Less satisfactorily, the album bleeds out with the self-pitying “My Body Is A Cage”, apparently a stab at a 21st century spiritual, a gospel lament whose humourless self-regard is an uneasy reminder that while there is much here to admire, at its overblown worst Neon Bible is one of those records that takes itself too seriously to be taken seriously. Watch it fly, though.