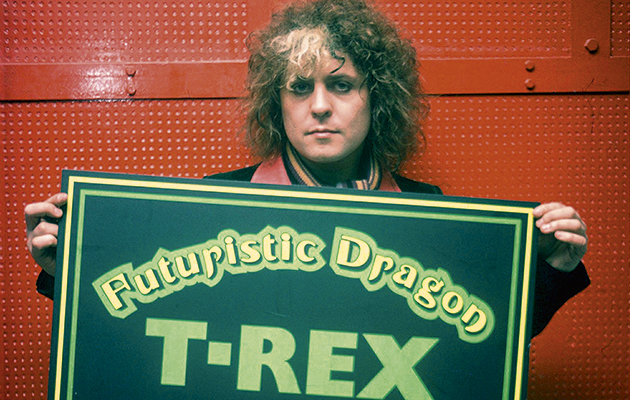 When Donovan popped in to see Marc Bolan in his Munich hotel room in spring 1975, he was a little taken aback by the 28-year-old’s expanding waist and excitable demeanour as he lurched around his suite with a massive breakfast. “At one point, a doctor arrived,” he remembered in 1992. “Marc dropped his pants, the doctor took out a giant needle and gave him a shot of B12 in the arse. Marc didn’t stop talking once.”

Sounds journalist Geoff Barton met the erstwhile Warlock of Love later the same year and found him similarly wobbly, writing: “His mind seemed to be travelling in a million different directions at the same time.” Barton told the star as much. “I’m afraid it is,” Bolan admitted. “That’s the problem with me. I’m a lunatic.”

This giddy, grisly collection covers the frantic 12 months Bolan spent in tax exile along with his backing singer-turned-partner, Gloria Jones, in a cocaine and cognac blur while his pop career crumbled. If the opium-den fug of 1974’s Zinc Alloy And The Hidden Riders Of Tomorrow marked the start of his star’s descent, Bolan’s Zip Gun (1975) and Futuristic Dragon (1976) – accompanied here with an abundance of bonus material – confirmed his transition from supernova to white dwarf, a quixotic assault on America and a doomed attempt at a film career further blows to an ego out of control.

Quick to announce that glam rock was dead in 1972, when he celebrated his second successive No1 LP, Bolan never found a satisfactory plan B, Jones’s shrill presence underlining the hubristic Greek tragedy inherent in his later albums. He wooed her in typically extreme fashion. “He asked me what I liked to eat,” she said. “When I said seafood, he had 129 boxes of it delivered to my hotel room.” There was something a little fishy about his vision of a soulful commercial resurrection with the help of the “Tainted Love” hitmaker too.

Work on Bolan’s Zip Gun (a souped-up version of US-only release Light Of Love) began in London and concluded in Hollywood without the bells and whistles supplied by long-term producer Tony Visconti. However – with Jones-powered, R&B experiments like “Sky Church Music” and “City Port” ultimately exiled to CD3 with the rest of the out-takes here – Bolan’s chance of stealing a plastic soul march on David Bowie went begging. Instead, he mustered up a disemboweled rehash of the sound of T-Rex touchstones Electric Warrior and The Slider with occasional burst of Stevie Wonder-flavoured clavinet. “It’s been going great,” Bolan said as he phoned home to Melody Maker. It didn’t sound like it.

Disco whistles and a mirror-ball friendly rhythm cannot disguise the old-fashioned boogie that underpins “Light Of Love” – a direct ancestor of Supergrass’s “Alright” – and while Bolan touts his “soul king stare” on “Solid Baby”, his leopard-skin spots were not exactly changing. The funky Showaddywaddy of “Space Boss” and “Think Zinc” lapse into familiar forms of groovy pastiche, with the Bowie-Dylan fusion of “I Really Love You Babe” and the squelchy “Zip Gun Boogie” things of rare majesty in a flimsy offering. Ultimately, the Thin White Duke trounced the man body-shamed by Melody Maker as “Marc ‘suddenly so fat’ Bolan”. Young Americans’ hit No2 in March 1975; Bolan’s Zip Gun didn’t even chart.

“He was just devastated with everything,” Jones noted later. “When you’re the biggest star next to The Beatles, you figure that your fans will grow with you. Then one day, you’re like: ‘Where are the fans?’”

Tantrums and turmoil followed as Bolan chased his muse down a series of dead ends. In spring 1975, he cut a bunch of duds at Chateau D’Herouville studio outside Paris (where he had recorded parts of The Slider and Tanx), and then behaved so appallingly at Musicland in Munich (Zinc Alloy’s spawning ground) that he was banned for life. Ordered to rest after it was discovered that he had the heart-rate of a 70-year-old, Bolan only really rallied after his accountants permitted him to return to London, where Futuristic Dragon was hatched.

Tasteless and over-orchestrated in most of the right ways, his 11th album pressed the reset button on Bolan’s mojo; a horrible sci-fi art sleeve and an introductory piece of Moody Blues-wibbling harked back to the cross-legged burbling of the original Tyrannosaurus Rex, but this was the slightly awkward return of the electric warrior of his pomp.

Crucially, it was heralded by a proper hit single – Bolan’s first since the elegiac “Whatever Happened To The Teenage Dream?” in February 1974. A No15 sensation, “New York City”’s incongruous central image (“did you ever see a girl coming out of New York City with a frog in her hand?”) was a garish distortion of reality: Mark Paytress’s excellent sleeve essay explains that its inspiration was Jones getting out of a yellow cab clutching a Kermit doll. However, with some android bleeps strapped to its basic Chas’n’Dave chassis, it is a quintessentially ecstatic T-Rex moment.

Futuristic Dragon – which grazed the top 50 on release in January 1976 – features plenty of throwaway rubbish (“Dreamy Lady”, eventually released as a single under the name T-Rex Disco Party, a notable howler) but indispensable trash too; the swaggering “Jupiter Liar”, the knuckle-dragging mysticism of “Chrome Sitar” – Oasis in embryo – and the Anglo-East Street Band clatter of “All Alone”.

There’s a glimmer self-awareness too, the enchanting “Dawn Storm” enlivened by talk of “learning on a journey”, of coming through fire to some greater understanding. Bolan and Jones, whose son Rolan was born in September 1975, go halves on its cathartic chorus: “Times they are strange and I won’t rearrange/No no, no, not my love for you.” It’s the sound of a glittery dinosaur heading defiantly toward extinction; lead-footed, slow-witted but slightly heroic too.

Bolan’s wild years were far from over; highlights of a tour of England in spring 1976 included getting a black eye after an altercation with a Bowie fan outside Manchester’s Free Trade Hall and a trip to hospital in Humberside after an incident involving a plate glass door. Ideas continued to flow haphazardly; a sudden burst of nostalgia for his ace-face days prompted a vision of a Cockney concept piece – non-album single “London Boys” and out-take “Funky London Childhood” among the surviving fragments.

Punk would issue him with a further adrenalin shot, and as his spiritual children – Generation X, The Damned, Adam & the Antz, Siouxsie and the Banshees – took their turn in the spotlight, Bolan could tell himself that he had been right all along. A stretch of the imagination, but – like his mid-70s work – not entirely off the mark.