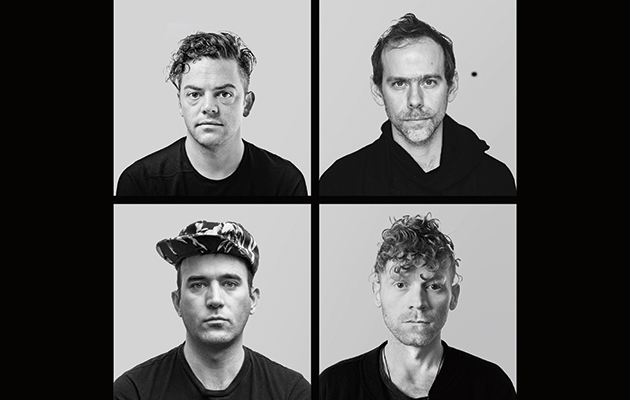 First mounted as a theatrical event by its four illustrious creator-composers five years ago, Planetarium is a head-spinning musical tribute to the cosmos that might’ve awed even Carl Sagan. In fact, the 75 minutes of music here can feel so overwhelming in scope, they may very well contain every sound in the known universe save for one.

That’s the noise made by the clunky, enormous laser projectors traditionally found inside the celestially themed theatres that inspired the album’s title. True, there’s not much room left over when this music is at its densest, like in the suitably huge-sounding climax of “Jupiter” as Sufjan Stevens’ falsetto dissolves into fragments and bursts of programmed drums slam against a barrage of brass. Yet there’s still a little space if listeners want to imagine the groan of a projector’s motor as the laser tilts toward the dome up above, drawing the moons of Io and Gannymede in bright skinny lines of orange and blue.

Despite the associations the album title invites, it was not the objective of Planetarium’s creators to craft a successor to Gustav Holst’s The Planets or Dark Side Of The Moon as a soundtrack for these special places where schoolkids, astronomy enthusiasts and stoned teenagers gathered to contemplate the great beyond. For one thing, the work was initially devised for a classical concert hall, Amsterdam’s Muziekgebouw Eindhoven having gotten the project started when it commissioned a piece from Nico Muhly. An acclaimed young composer and sometime arranger for Joanna Newsom and Anohni, Muhly took it as an opportunity to collaborate with Stevens and another close friend: Bryce Dessner, The National’s guitarist and an increasingly accomplished avant-classical composer in his own right. Stevens then brought on James McAlister, his percussionist since the tour for the singer’s 2003 breakthrough Michigan.

After developing the music together (with Stevens handling the lyrics), they enlisted a string quartet and a battalion of trombonists to help them perform the piece in Amsterdam, London, Sydney and Brooklyn in 2012 and 2013 before the foursome returned to their respective endeavours. The new album combines recordings made during that period with later enhancements, tweaks and additions, done with the goal of crafting a standalone work rather than a document of the original live incarnation.

As a result of all that painstaking effort, what might’ve been a one-off footnote in its creators’ careers is often as rich, imaginative and fulfilling as anything in their collective oeuvre. It’s also the most difficult to categorize, the heady swirl of sound encompassing everything from the kitschy flourishes of sci-fi movie soundtracks to prog-rock bombast to new-age ambient drift to propulsive techno. It also represents a successful synthesis of the maximalist aesthetic in many of Dessner and Muhly’s classical ventures and the adventurous pop songcraft that’s Stevens’ forte.

In regards to its singer’s contributions, Planetarium is further evidence that Stevens is at his best when he opts to scale up, not down. As he did on the similarly ambitious state-themed duo of Michigan and Illinois (2005), he hopscotches between a variety of subjects, perspectives and treatments without losing his focus. His principal strategy here is to use the classical myths that ascribed the planets with the properties of gods as springboards for more personal reveries. In the exquisitely dreamy “Venus”, Stevens combines an ode to the goddess of love with his own reminiscing about “Methodist summer camp” and adolescent games of “you show me yours, show you mine”. By contrast, the subject of the stormier “Mars” prompts an apocalyptic vision of endless war and a final test of love’s redemptive powers. (Stevens’ lyrics have rarely been so suffused with the Christian mysticism that’s long been an element in his writing.)

That vast heavenly canvas also serves as a place to project political themes as well as personal ones. In “Earth” – a shape-shifting hymn that, at 15 minutes, virtually counts as a song cycle unto itself — Stevens laments the “paranoia” and “inner anguish” that can make our experience on terra firma seem so small and petty, thereby drawing our eyes and thoughts upward.

It’s this sense of childlike awe at the stars above and the possibilities they represent which Planetarium most strongly evokes with its bold and varied take on the music of the spheres. (Indeed, we’ll be lucky if the year yields another headphone album as sumptuous as this one.) Yet Stevens tempers that awe with a suspicion he shared with the ancient Greeks and Romans. That’s the notion the gods who reside up there are just as flawed as we are.

Q&A
Bryce Dessner
What brought this team together to make Planetarium?
Well, Nico, Sufjan and I have worked together for years, and obviously James has been playing with Sufjan from even before Illinois. Both Sufjan and Nico have been very involved in pretty much all of the National records since 2006 or so. Nico and I also have very classical backgrounds so we do a lot of work together in that area. There was an intention to really collaborate on the composition together and the concept of making a song for each planet was a really great vehicle. I think it’s something Sufjan had wanted to do for a long time — obviously there’s a lot of cosmic mythology in his music to begin with!

Was the work also a chance to delve into this huge swath of space-inspired music? The references run from Gustav Holst to Pink Floyd to ambient techno.
There’s some Isao Tomita ‘70s synth music in there, too. Most of all, we wanted the songs to be good. The project could’ve easily just been an orchestral or avant-garde or ambient piece but the distinguishing thing about this is that there are these beautiful songs which we really feel say something. In terms of the artistic scope, we didn’t curtail it at all — we decided to go all in and let it be this vast piece. So there are these instrumental interludes that feel really composed and also these moments that are more improvised, which we really love. It was always about going further.
INTERVIEW: JASON ANDERSON