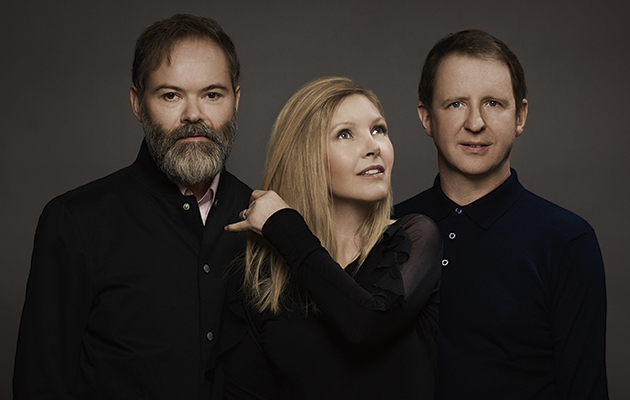 It’s relatively rare that writing on an album is going to lead you to the metaphoric door of the family home, but Saint Etienne’s ninth album, Home Counties, had this writer remembering dinner table conversations about parents growing up in Surrey – my mother lived in Croydon. Passing mention of some of the album’s song titles – “Whyteleafe” (a village in Tandridge), “Woodhatch” (a suburb of Reigate) – opened the door to all kinds of reminiscence: growing up in a house between the airport and the railway (when the latter was bombed during WWII, the windows all blew out); working at the Coffee Bean, on the high street of Wallington, the first coffee lounge in the home counties; bunking off with friends to catch trad jazz and modern jazz in local halls in Croydon, Sutton and Richmond.

This is all strangely apposite for Saint Etienne, as over the past fifteen years, in particular, they’ve become emotional geographers of London and its surrounds, as interested in the stories of everyday life as they are the larger myths we tell about the cities we both love and hate. While they’ve always been invested in the possibilities of London as an archetypal city of modernist endeavour, around the time of 2002’s Finisterre, the album that morphed into a beautiful, elegiac tribute to the city, co-directed by film makers Paul Kelly and Kieran Evans, that interest seemed to redouble on itself; much of the music and art they’ve been involved with since has seemed, somehow, to hymn the possibilities, latent, actualised or betrayed, of modern London.

With Home Counties, they turn their eye to the ring of counties that cosset London from the rest of Britain, places that the trio know well: Bob Stanley and Pete Wiggs grew up in Reigate, Surrey; Sarah Cracknell in Old Windsor, Berkshire. As with much of Saint Etienne’s music, Home Counties works on multiple levels. At times it’s a kaleidoscopic rendering of the quotidian existence of home counties regulars, navigated as much around infrastructure as home life – the brilliantly titled “Train Drivers In Eyeliner”, musically a shuffle and glide across the floor that swoons into a woozy pop refrain, is a re-imagining of the railway network around the listening habits of union members: smart and touching, it’s a slyly socialist gesture that can’t help but feel like cocking a snook at the ongoing dismantling of public services.

Elsewhere, Saint Etienne focus back on what’s made them so great over the decades: an eye to the dance floor, the other eye on the glamorous glory of pop at its finest, fingers thumbing through crates of dusty old records uncovering lost sounds, while casting sideways glances at the music happening on the margins. For Home Counties, this means a clutch of glistening electronic pop gems: the irresistible rush of “Out Of My Mind”, the sturm und drang of “Heather”’s stressed textures, the stealthy sashay of lead single “Magpie Eyes”, which struts into view with a bassline that’s pure Peter Hook.

Indeed, here’s something of the index of possibility to the album’s nineteen songs: from the dream-pop melancholy of “Whyteleafe”, where an office worker clocks in and out of the day-to-day in a ‘municipal dream’, on into the late-night, gilded disco of “Dive”, and the 1960s romance of “Underneath The Apple Tree”, all Motown snares and slapback echo, a Northern Soul blinder of a song, Home Counties might well be the album to play to people who’ve always wondered exactly what Saint Etienne do, and how they manage, somehow, to reanimate so much that’s good about the past of pop music without becoming glib, acritical poptimists.

Most importantly, while they’re often now looking backward, over their collective shoulder – long gone are the acid house dreams of “Only Love Can Break Your Heart” and Foxbase Alpha – their recuperations of a lost Britain are mindful of the dangers of nostalgia, while understanding there’s much of worth to be salvaged from a modernist Britain that was meant to grow out of a collective social contract signed after WWII. That social contract, of course, was ripped apart by decades of Tory rule and the betrayals of New Labour.

Under the shadow of Brexit, then, it’s hard not to hear a song like “Sweet Arcadia” – the album’s breathtaking finale, eight minutes of swoon and surrender, and one of their most expansive, hallucinatory idylls of tone and texture – as being about rather more than just the plotlanders of 1920s and 1930s Essex, an anarchic group who embraced the notion of the ‘makeshift landscape’, living in jerry-rigged railway carriages, converted boats, or improvised cottages. Listening in the now, it’s as much about a dream of a utopia to be, perhaps impossible to reach, but still well worth the striving: an emotional state that Saint Etienne have long understood, and captured in their music.

Q&A
Pete Wiggs
Home Counties is grounded in the geographies of your youth – you were born in Reigate, Surrey…
I’ve got really fond memories of living in a 1960s close – one of our neighbours lived in an architect house with a crazy paved chimney that looked very Brady Bunch, and [there was] another couple, Vera and Norman, who were like a stylish George and Mildred, who called their house Veno. Bob lived nearby and we’d get together in school holidays and weekends – our mums met at the shopping parade that’s in the gatefold of the sleeve.

You’ve mentioned the love-hate relationship with the home counties at the core of the record.
In the ‘80s living in Croydon there was definitely a pervading sense of narrow-mindedness and after-dark violence that wasn’t so evident a short train ride away in London. After initially thinking it drab and boring I grew to love a lot of the architecture – both urban and suburban in Croydon, lots of it has been ruined with pebbledash and the wrong windows.

The album was produced by Shawn Lee – how did you connect with Shawn, and what did he bring to Home Counties?
We first met Shawn when we were spending a lot of time at the Xenomania studios and he was doing a stint there. Sarah wrote “Dive” with Carwyn Ellis and he suggested recording at Shawn’s – we loved the result and were into Shawn’s ‘oeuvre’ as it were and as we’d met already it seemed like a good idea to try some ideas out.
INTERVIEW: JON DALE