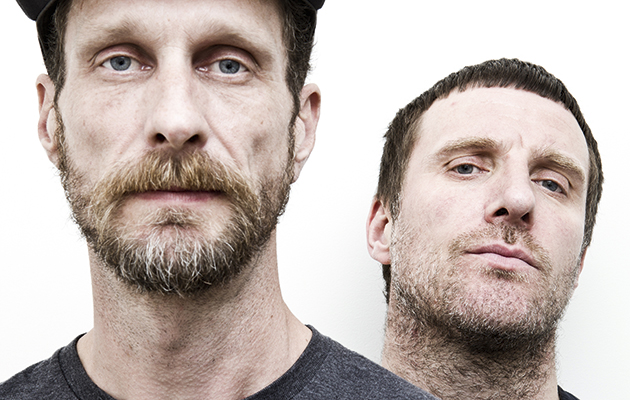 The most recent Sleaford Mods single “TCR” had a rather unexpected promotional platform. In early September, the band’s singer Jason Williamson was suspended from membership of the Labour party for “abuse” (specifically for a tweet in which he called MP Dan Jarvis a “posey cunt”), which resulted in his appearance on Channel 4 News. There was a video clip, and an interview during which he had a finger wagged at him somewhat by presenter Matt Frei.

Taking the admonition on the chin, Williamson explained his position. People come to Sleaford Mods, he explained, for a mixture of rough jokes and rough language. Personally, he hoped for a better world, as envisioned by Labour leader Jeremy Corbyn. To the New Statesman, he expounded further: “We need to change the fabric of today’s society.”

That society, for better or worse, is where Sleaford Mods have for the last three years of professional activity made their home. A kind of anti-Britpop, the music made by Williamson and Andrew Fearn turns the observational urban pastoral of Blur’s “Parklife” into a pitiless and immersive social critique.

From hardline reports on unemployment and British social behaviour, to more ruminative songs touching on privilege, family life, nostalgia and identity, the band has proved to be rather as their recent experiences have suggested: brutal on the surface, but rather more thoughtful and nuanced underneath. Their vision has recently taken them to some surprising places. Later… With Jools Holland. The Glastonbury Festival. Awards ceremonies. And, of course, the news.

The first Sleaford Mods album to have emerged since the EU referendum in June 2016 inevitably comes freighted with a certain expectation. Cometh the hour, cometh the men – Brexit clearly has the potential to be for Sleaford Mods what pre-millennial tension was to Radiohead. Beyond a couple of mentions in passing, however, (the faintly sinister “homeowner… Brex-city Roller” of “Cuddly”; and a swipe at Ringo Starr’s endorsement of the EU departure in “Dull”), the whole business is left as a given, part of the air and atmosphere of the record’s examination of identity, not its core topic.

Instead, the band continue to develop their sound and deepen their levels of engagement. Since the relentless, Wu-Tang-inspired productions of their early singles, well-suited to Williamson’s ranting narratives, Andrew Fearn’s music has expanded to incorporate atmospheric, brooding soundscapes like “Rupert Trousers” (from their last album) or the lively rock of “TCR”, an account of trying to go out for the evening when you have kids (“Madhouse/Chit-chat/Duties/More nappies…”).

Stream-of-consciousness ranting has helped Sleaford Mods develop songwriting which is thoughtful, while retaining its intensity. On some level, the band deal in the work/life balance – specifically how work, or the alcohol or drugs consumption that deaden the experience of it, might prevent you from more serious examination of yourself or your surroundings. “Messy Anywhere” is an account of how “big nights” in mid-life might dull the monotony of a work-facing life. “Time Sands” is a bleak commuter portrait.

As ever with Sleaford Mods, there is a balancing act in play here, between the grimness of the bigger picture and the energy and humour which animates it. Throughout the album, we can delight in passing references to the vanity of being a teeth-whitened holder of a gym membership, to football, and the NME. There are also classic rants like “Snout”, which somehow conflates primary school education, the designer clothing of the late 1990s, and Snapchat. In “Drayton Manored”, a darkly amusing account of partying at home, the midlands family resort Drayton Manor becomes rhyming slang for “spannered”.

Much as with the last album, Key Markets, though, English Tapas is sequenced to provide a philosophically downbeat experience, something more thoughtful behind the jokes. At the end of the album, “BHS” (almost a digital version of Black Sabbath’s “Paranoid”) uses the plight of the high street and the recent actions of Sir Philip Green to ponder the gulf between rich and poor. “We’re going down like BHS while the able-bodied vultures monitor and pick at us…”

The album ends with “I Feel So Wrong”, a nighttime walk in the town centre. There’s nothing special to report on, but there is certainly a mounting unease. It’s a powerful moment, which reminds us that a place doesn’t have to be in overt turmoil for it to be very troubling indeed. English Tapas judges the mood well: strong words, just slightly more softly spoken.

Q&A
JASON WILLIAMSON
Why English Tapas?
Andrew told us this story about how he walked into this pub and on the menu board it said “English Tapas”. It consisted of half a scotch egg, a cup of chips, a bit of pickle. It just rang true about how English culture can try and extract these beautiful things from other places, and bastardise them, like the Findus microwave pizza or something. We thought, that’s it.

Was Brexit a tempting subject?
I held off. I was getting loads of stuff on Twitter – can’t wait for your new album, you’re going to have loads of stuff to moan about. I thought, no, I’m not falling into that trap. I like to think we’re quite flexible, not just political, though everything is political because it’s dictated by horrendous policy. I just waited and waited until it really started boiling my blood – like Ringo Starr coming out in support of it.

Is success what you thought it might be like when you were younger?
Not at all. I’m different now. If I was a bit younger, I’d be down the boozer now, lapping it up, doing loads of whiz and getting my ego rubbed. Part of me is a bit pissed off about that, but you get older, don’t you? Now it’s the creative process which gets the attention. I like sitting there, thinking about what to do with it.
INTERVIEW: JOHN ROBINSON