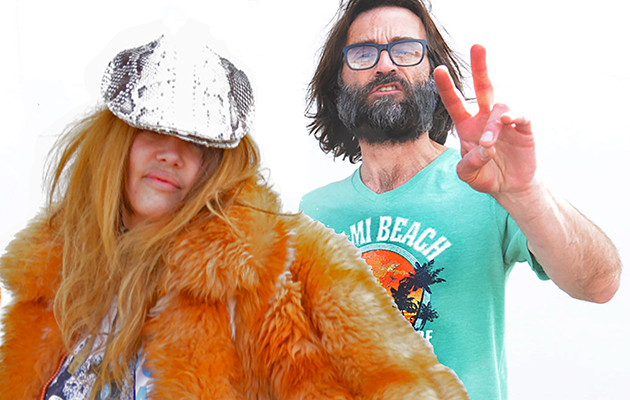 Collapsing major-label deals, a disintegrating marriage, a quantity of drugs that would make Hunter S Thompson demur – Royal Trux have been through things that would have killed many bands stone dead. To be fair, it did knock them out of commission for a little over 15 years. But in the years following their 2000 swansong Pound For Pound, there was the lingering sense that Neil Hagerty and Jennifer Herrema never quite put thoughts of their former group behind them. Herrema’s subsequent band RTX – later renamed Black Bananas – channelled more than a little of Trux’s dissolute hard-rock energy. Hagerty’s work under the name The Howling Hex, meanwhile, felt firmly rooted more in Trux’s more haywire, experimental side.

In 2012, Hagerty was planning a live re-enactment of Royal Trux’s notoriously out-there 1990 double LP Twin Infinitives when Herrema got wind. Instead of getting mad, she got in touch, the pair got to talking – and in 2015 they made their live return at California’s Beserktown Festival. Royal Trux were officially back on the road.

White Stuff – the first studio album since Royal Trux’s reformation – is a reaffirmation of the group’s core values: the raw thrill of rock’n’roll, and the realisation that trash, when looked at the right way, can appear a kind of treasure. Weirdly recorded, weirdly mixed, their take on rock music feels mutant, radioactive – the equivalent of that three-eyed fish from The Simpsons. Hagerty’s guitars chunter and wail, sometimes echoing classic rock moves, other times wandering off on weird melodic tangents inspired by Ornette Coleman’s philosophy of harmolodics, the jazz saxophonist’s attempt to break free of conventional musical notation into new realms of raw expression. “Year Of The Dog” and “Under Ice” feature translucent keyboard washes and distorted electronics that arc across the frame. And firing through everything is the pair’s unmistakable chorus, Hagerty’s stoner drawl and Herrema’s wildcat yowl weaving in and around each other like a pair of drunks on the dodgems.

It goes without saying that this is a pretty singular brew. Royal Trux are kind of like The Fall in the respect that it’s hard to get a handle on what any given song might be about – they speak a language that’s all their own – but great lines pop up over and over, like bugs splatting on a windscreen. “I got a baseball bat and a handful of nails!” the pair holler on “Under Ice”. “South Californian drivers are the 19th wonder of the world!” goes “Purple Audacity #1”, a simmering funk excursion that finds Hagerty whipping up wild peals of guitar feedback. Someone called “Whopper Dave” winds up with a donut to the head. “Suburban Junkie Lady”, meanwhile, is a character sketch that’s sung with genuine warmth. “You’ve got nickels in your dimes/It happens all the time,” they chorus, sweetly.

Has anything changed in Truxland in the last decade and a half? The Kool Keith-featuring “Get Used To It”, released last October but not included here, appears to have been a little bit of a red herring, promising a new rap-boogie direction that never quite arrived. “Sic Em Slow”, with its ringing chimes and hand-drum percussion, gestures to the influence of Japanese ambient music – although Hagerty takes care to chain it to one of the album’s best, ugliest riffs.

Ultimately, perhaps the track that sums up Royal Trux 2.0 is White Stuff’s title track. It’s a voracious anthem to tour life with triumphalist chorus: “This is the way it’s supposed to be/Push me on a cart through the duty free/ Hanging and playin’ all across the land/Tellin’ everybody we’re the greatest band…” But there might be a note of caution buried in there too – a warning about chemical excess from a band that have certainly lived it. Arguably, other groups have taken up their baton in their absence – think Ariel Pink’s damaged rock deconstructions,  or new-wave garage sorts like The Kills, who borrow the style, if not the substance. But Royal Trux remain unique, one of a kind: still going wrong like a hydrogen bomb.