Impassioned, old-fashioned soul-blues, and all the better for it... 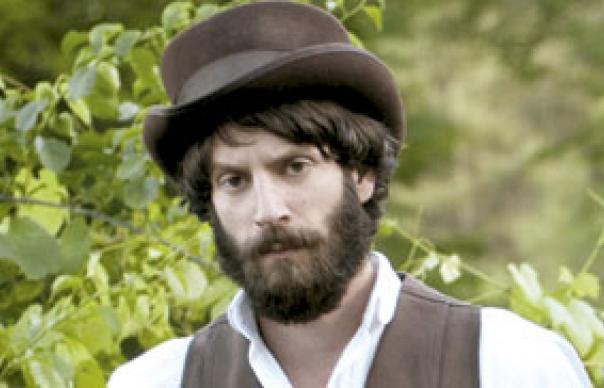 Take a long, deep draught of that album title and drink it down. Even if you were previously unaware that Ray LaMontagne was a bearded backwoods soul man of some infamy, the title of his fourth album instantly gives the game away: God Willin’ & The Creek Don’t Rise entirely bypasses the brash blare of the past 40 years of musical history – rap, grunge, new wave, punk and disco might never have existed – and instead buries itself deep in the pines, making old time music out of wood and wire.

Despite gaining an immediate foothold with his towering 2004 debut Trouble, LaMontagne has always looked most comfortable lurking in the shadows of the past. Reluctant to somersault through PR hoops and with a sometimes painfully self-conscious stage demeanour, even low-level fame seemed burdensome. The 2006 follow-up, Till The Sun Turns Black, was utterly bleak, hamstrung by self-doubt and expressly designed, it appeared, to help him escape his unlikely status as a TV-advertised Radio 2 staple and get back to the business of being a ’70s-style music man who let the music do the talking.

His first album without celebrated roots producer Ethan Johns at the helm, God Willin’ & The Creek Don’t Rise finds LaMontagne even further out of step with the times. And he’s rarely sounded so utterly engaged.

Self-produced and recorded over two weeks at his home in rural Massachusetts, you can practically taste the wood smoke drifting up to the treetops. The soulful Stax horns and smooth strings of 2008’s Gossip In The Grain have gone, as have the occasional side-steps into Beatlesish pop and the lusty humour of songs like “Meg White”. Instead, this is a triumphant return to core values, one that delves deeper into the rough hewn country-blues of Trouble and where the rasping harmonica on “For The Summer” constitutes a major sonic augmentation. The Pariah Dogs have worked as LaMontagne’s live backing band for several years, and here they build an unfussy, loose-and-live framework around his spectacular voice – at times desperately raw, at others bathed in a soft, golden glow – as it tears into 10 songs of love and despair.

You do worry about LaMontagne. For all his insistence that this isn’t straight autobiography, at times he sounds unspeakably alone, gnawing at some dreadful internal wound that never quite heals over. The gorgeous “New York City Is Killing Me” unfolds with an unhurried inevitability, the country boy adrift in the city and “tired of all this concrete, tired of all this noise…. wishing I was dead”. Like Van Morrison, LaMontagne is haunted by nostalgia and lost innocence, memories that gather like a storm waiting to break. On “Like Rock And Roll & Radio” he spends six minutes burning with a regret so deep it would be unbearable, were it not for the fact that the sound it produces is simply bewitching.

“Are We Really Through” has a similar tortured beauty, but elsewhere the gloom is leavened by something more primal, even joyful. Opener “Repo Man” is an itchy slice of malevolent white boy’s funk, reminiscent of Tim Buckley’s Greetings From LA. When he finally tires of spraying vicious kiss-off sentiments in her direction, LaMontagne lays his errant woman across his knee for a spanking, an act still classified as marriage counselling in certain parts of the US. “Beg Steal Or Borrow” motors like a hillbilly version of The Velvet Underground’s “What Goes On”, but best of all is the reflective “Old Before Your Time”, a banjo-driven beauty that slides along with the gentle charm of a paddle-steamer.

It ends with the louche jugband blues of “The Devil’s In The Jukebox”, LaMontagne “frying tomatoes on the griddle” as the guitars cook up a mean mess and the drums crackle like popcorn. It seems a fine place to leave him: banging around up country, a woolly alchemist turning all that pain into proud, earthy, wonderfully affirming music.
Graeme Thomson

Q+A
Why did you decide to produce the album yourself?
I just needed a change and I had a clear idea of what I wanted to accomplish. I’m really proud of what Ethan [Johns] and I did, but I enjoyed making a record this way far more than I enjoyed making it any other way. There were no lulls in the momentum, and working at home made a huge difference. We were in an old ballroom with 14-foot windows looking out over fields and hills, so recording didn’t feel separate from the outside world, it felt like part of the day: have breakfast, then walk in and start making music. It was really freeing, and it’s wonderful to hear that openness.

You don’t want to be too personal. The goal is to let other people take the song and make it their own, but I know I’m not going to succeed all the time. I find it frustrating if people write it off as depressing music, I take that personally. You hate to be dismissed as this poor, sad guy, which just isn’t the case. I love life and I love my career. I mean, my favourite show is The Mighty Boosh! But you can’t close your eyes to sadness either. I’m just trying to make something beautiful.
INTERVIEW: GRAEME THOMSON