Paul Weller – Other Aspects: Live At The Royal Festival Hall

His ever changing moods. Strings attached 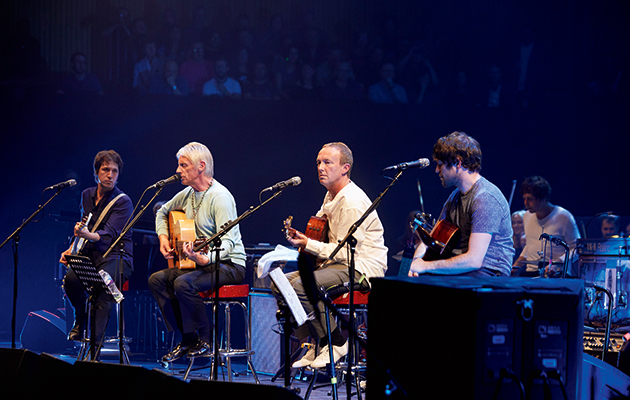 “I don’t know if we’ll ever repeat this,” says Paul Weller at the beginning of Other Aspects, interviewed during a break in rehearsals. “We’ve got to make it as special as possible – and that’s it.” He tends to be a forward-facing fellow, but you can see why Weller would want a permanent record of the two concerts he played at the Southbank last October. Performing a career-spanning set with his band and the London Metropolitan Orchestra, alongside a number of guest artists, the shows were the fulfilment of a long-cherished ambition to put himself entirely at the service of beauty.

The second night at the RFH was not only recorded for a live LP but filmed by Joe O’Connor for this two-hour concert film. Other Aspects finds Weller in “a more reflective space” – as well as in a smart pair of dress trousers and a ruinously expensive-looking jumper – as he tackles 25 songs spanning 40 years.

In terms of musical mood, the show takes its readings from his latest album, True Meanings, a low-key collection of largely acoustic songs burnished with strings and horns. As she does on the record, Hannah Peel handles the arrangements, and conducts the LMO. Though she makes terrific use of the tools at her disposal, enriching the songs and often radically altering them, Peel also knows when to stay out of the way. “Aspects” and “Where’er Ye Go” – a lovely ballad from 22 Dreams – are all the more affecting for their simple, pared-down settings.

It also helps that Weller forgoes  a greatest hits set instead to go roving through his back pages. Perhaps recognising that the world may not be ready for an orchestral version of “Eton Rifles”, his forays into The Jam, Style Council and his solo songbook rarely lead where  you might expect, with the emphasis on rejuvenation and reinvention.  Of the three Jam selections, “Boy About Town” strolls soulfully  where it used to strut, while the night’s prize-winning leftfield pick, “Private Hell”, gains a dramatic  new suit of clothes.

“Tales From The Riverbank” bends a little more readily to the bucolic mood, as does “You Do Something To Me”, a rare populist choice. When it comes to solo work, Weller leans towards his first two albums. “Country” is both pastoral and vaguely trippy, John Martyn meets The Velvet Underground’s “The Ocean”, while “Wild Wood” sweeps and swoons. Digging into his 1992 debut, he works up a fine head of steam on “Amongst Butterflies”  and the prowling throwback funk  of “Strange Museum”.

Throughout, the past is very much at the service of the present. Almost all of True Meanings is performed, enabling Weller to forge connections across eras. “The Soul Searchers” makes a soothing companion to a swinging “Have You Ever Had It Blue?”; the bluesy “Mayfly” finds a sparring partner in the punchy “Man Of Great Promise”. Elsewhere, the detailed arrangements tease out the diversity of the new material, highlighting jewel-like intricacies in “Glide” and “What Would He Say?”, a lovely Bacharach-gone-country lilt. “Books” is radically altered by the contributions of vocalist Lucy Rose and Sheema Mukherjee, Kamalbir Nandra and Tofail Ahmed, joining Weller on sitar, tanpura and Indian violin.

Given that Other Aspects is also available as a double live album, it’s worth considering what the visuals offer that the audio can’t. Weller’s never had much truck with slick patter or dazzling theatrics, and doesn’t deviate from form here. This is in most respects a workmanlike concert film, without flash or frills, placing its faith in the performances. Even so, O’Connor wisely cuts  away from the show now and again, returning to the rehearsal room  for a through-the-keyhole peek at ‘the process’. As Weller lays out  his reasons for pursuing this venture, it’s instructive to see him – fag constantly on the go – and his band getting to grips with the rigorous discipline of playing with an orchestra.

Back on stage, with 24 musicians involved there’s plenty of business to cover. O’Connor succeeds in capturing the intense interaction between the participants, as well as the depth of emotion they all invest in this passion project. Weller, meanwhile, is clearly relishing a profoundly satisfying career moment. “It’s the closest thing to flying, really,” he mutters. Other Aspects offers a welcome opportunity to watch him gently soar.