A pivotal album by a band happily outliving expectations 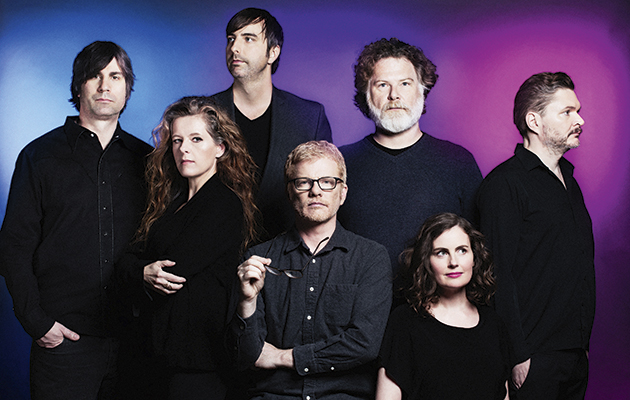 The New Pornographers were never meant to make it to 2017. At the tail end of the 20th century the group started life as a pick-up band for Vancouver indie musicians, some of whom were semi-famous (Neko Case, Destroyer’s Dan Bejar) and some of whom weren’t (pretty much everybody else). There was no real frontman, no main songwriter and no real plans for the future beyond the release of their 2000 debut, Mass Romantic. Even their name pointed to an inevitable expiration date, not only alluding to the most disposable pop-culture commodity (porn) but also suggesting that really they’re just screwing around.

But Mass Romantic was massive, both musically and commercially. The band penned sleight-of-hand hooks and delivered them with a pummeling single-mindedness, redefining power pop for the new millennium. For a few years each subsequent album sounded more rambunctious than the last and somehow more sophisticated, and by 2005’s Twin Cinema, the side-project had become a day job for nearly everybody involved – most of all Carl Newman, who emerged as the face of New Pornography.

Whiteout Conditions sounds like the most pivotal album in their surprisingly large catalogue. For one thing, it’s the first record since their debut not to be released on Matador Records (Mass Romantic was originally put out by Vancouver-based Mint Records, just months before the band signed with the much larger indie label). For another, it’s the first without founding members Bejar and Kurt Dahle. Bejar has contributed a song or two per album – sometimes the best song or two – but his absence gives Newman an opportunity to assume even more of a leadership role and to fashion a thematically cohesive New Pornographers album, one that touches on a variety of subjects – prescription drugs, politics, band life – all from a stationary point of view. Dense with skewed imagery, knotted internal rhymes, and ingenious hooks, Whiteout Conditions may be Newman’s most confidently crafted album yet.

Dahle’s absence is, surprisingly, much more noticeable on Whiteout Conditions. Drummers are underrated players, especially in power pop, a genre that depends on tempo to sell the melodies. Ever since he pounded out the first beat on the first song on the New Pornographers’ first album, Dahle reinforced Newman’s earworm fanfares and Bejar’s eccentric dramas, often playing against the melodies and always providing reckless energy to even their most polished productions.

Rather than a setback, this lineup change became another opportunity for the band to remold itself slightly, to freshen up an attack that was becoming more and more familiar. Filling that Dahle-shaped hole on Whiteout Conditions is Joe Seiders, a session musician who made his debut as a touring member of the New Pornographers and later became a permanent butt on the drum stool. He doesn’t mimic his predecessor’s style, but offers a different kind of versatility, augmenting his live drums with rigid drum machines and sequenced beats. Newman describes the sound of Whiteout Conditions as “Krautrock Fifth Dimension” (see Q&A below), which is certainly apt: Seiders holds the songs down with his tight motorik rhythms, while everyone else harmonises wildly. Over the racing rhythms of “Juke”, they sample, distort and collage their voices until the entire band becomes one big synthesizer, repeating the title until it loses all of its musical connotations and becomes pure sound.

Aside from the largely a cappella “We’ve Been Here Before”, which sounds like a choir swimming to the surface of a choppy ocean, all of these songs build from the drums up. That technique creates a relentless surge of voices and guitars. “Clockwise” crests and crashes wildly, the entire band singing along to one of Newman’s more intriguing choruses about making a pilgrimage to “the valley of lead singers”. The band seem to be subtly shifting and expanding their roles, none more so than Case, who takes a more prominent role on Whiteout Conditions. She maneuvers the twisty chorus of the title track and provides a sympathetic vocal foil for Newman, but elsewhere, her voice – so haunted when she sings country, so grandiose when she goes pop – becomes a sampled instrument, both familiar and slightly askew.

And the final track, “Avalanche Alley”, may be the fastest and fleetest thing the New Pornographers have ever done, racing along as though trying to outrun the snowy disaster of the title. Animating even the slowest songs on Whiteout Conditions is a sense of play and possibility, the realisation that these musicians can shake off the dust and still surprise us. It may not reach the heights of their early material, but this daring album promises the band will be around for at least another 17 years.

Q&A
AC NEWMAN
How did you figure out what this album would sound like?
The process is, you just start. You just start and you go from there. My idea going into it was like a Krautrock Fifth Dimension, just to have a different vibe. One of the first songs that came together was “Play Money”, and I thought, I want the record to sound like this. This is a good template.

Did changing drummers that have any effect on that aspect of it?
It really did. Our old drummer had a pretty fierce idea of how things should be, which was often great. Going into this record, though, we realised we could do whatever we wanted. Joe [Seiders] is an amazingly positive force, and he’s up for trying anything. Hey, why don’t we put a robotic kick drum in there? The drums don’t all have to be live. I think that adds to the vibe of the record.

Adaptability is important, especially for a band that maybe didn’t plan to be around this long.
That still astounds me. From the beginning I never knew if it was going to last into next year. But I’m going to keep doing it even when people stop listening completely. So expect some of my best work when I’m 70.
INTERVIEW: STEPHEN DEUSNER