Mavis Staples – We Get By 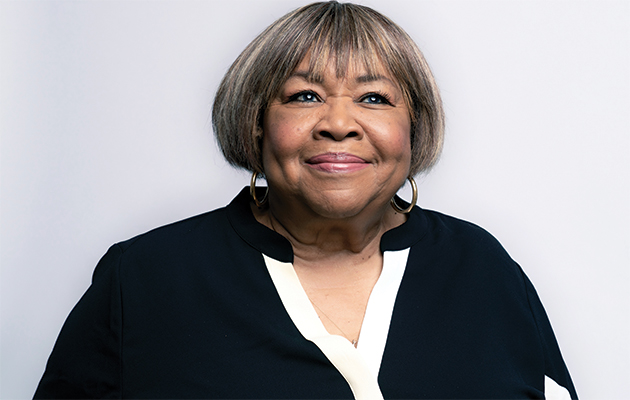 ‘Change’ is not a theme one expects from an artist approaching her 80th birthday. More usual would be a reprise of old glories or some Johnny Cash-style meditations on death. Mavis Staples is not so easy to predict, however. 2016’s Living On A High Note deliberately requisitioned songs that had a joyous, upbeat feel. The three recent albums she made with Wilco’s Jeff Tweedy – an unexpected pairing for sure – ranged wide in both their choice of material, from Randy Newman to George Clinton by way of gospel standards, and in their musical treatment. 2017’s If All I Was Was Black, for example, often sounded like “Family Affair”-era Sly Stone.

On We Get By, Staples rings the changes again, this time working with Californian bluesman Ben Harper on a set that ranges from funky to subdued. It’s a sparser affair than the Tweedy-produced trio, adding only backing voices to a bass/drums/guitar lineup in which Harper’s searching playing provides the principal, sometimes sole counterpoint to Mavis’s earthy, heartfelt vocals, their power remarkably  intact in her advancing years.

Staples and Harper have worked together before as one of the pairings on Living On A High Note. Born 30 years apart, they share a history of political activism. Mavis’s advocacy stretches back to the Civil Rights struggles of the 1960s, when her father, a close friend of Martin Luther King, lent the Staple Singers to the movement’s soundtrack. Her commitment has never wavered. Harper has been similarly relentless since he arrived in 1994 with Welcome To The Cruel World, an album whose standout, “Like A King”, paid tribute to both Martin Luther King and Rodney King as martyrs to the Civil Rights cause.

At first it seems that this will be an album of protest songs. “Change”, the opener and lead single, is funky blues with a John Lee Hooker groove and a snappy vocal that’s custom cut to become an anthem for today’s troubled times. “One’s the number, blue’s the colour, now’s the time/We gonna change around here,” snaps Mavis to a background of gospel voices, while Harper throws in a dirty solo. We may be hearing a lot of more of it in the next two years.

After that, however, the tone of the record begins to soften and take on a more soulful hue. The defiance of “Anytime” is set to a riff that could be from Stax-era Staples, adorned with some off-kilter guitar work. “We Get By” is slower still, a testimony to the stoicism of people who have little but survive on “love and faith” and sung like a lovelorn B-side on an old soul single.

That imaginary single might have “Sometime” on its A-side. Its lyric – “Everybody got to change sometime/Cry sometime/Pray sometime” – is a thread that has run through blues and gospel traditions for the last century, and gets an infectious treatment here, with Harper laying down a rolling, reverberating groove much in the manner of the late Pop Staples, while hand claps and gospel hollers help drive things along.

There are more personal pieces here. “Hard To Leave” is a love song addressed to a lifelong companion, comparing the passage of time to a warm summer breeze, and detailing the intimacy of “softly reaching for your touch in my sleep”. More stringent is “Chance On Me”, calling on a stone-hearted lover to open up and embrace possibility, delivered with an anguish that’s matched by Harper’s stinging solo. The same forlorn mood haunts “Never Needed Anyone”, an achingly intimate piece that verges on despair.

Mavis has always walked an ambiguous line between the sacred and the secular, her records often managing to inhabit both worlds simultaneously. So it is with “Stronger”, where the “Nothing is stronger than my love for you” chorus might equally be addressed to a lover or to Jesus; take your choice. There isn’t much ambiguity about “Heavy On My Mind” or “One More Change”. The former is almost a farewell – “We tried so hard to slow this world down/But now my love is in the ground.” Delivered spoken as much as sung and backed only by Harper’s spare guitar, it’s a deep, affecting piece. The “One More Change” of the album’s final track isn’t specified as death but it’s implied. Unsurprisingly, it’s a harrowing piece, with Mavis hoarse and tormented; but soaked in gospel influences as it is, it’s also transcendent, which is the gift that Mavis Staples has been bringing since she was a 1950s teenager singing “Uncloudy Day” with her family.