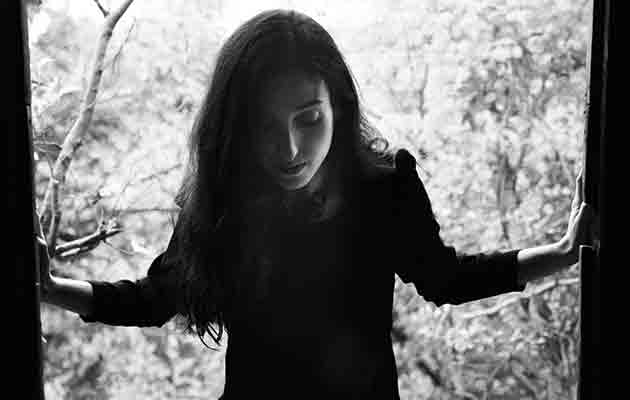 In a musical age of compression – in sound files, budgets and, sometimes, ambitions – Marissa Nadler is someone still committed to building the grand musical palaces once known as ‘sonic cathedrals’. For more than 12 years, this Boston native has been making albums of intense, spectral torch songs influenced by murder ballads and country blues. There have been songs about dead cities, about unfaithful partners, about Virginia Woolf and Victorian Siamese twin circus performers, along with covers of Leonard Cohen and settings of Edgar Allen Poe.

2014’s July was something of a breakthrough, an elegiac album that downplayed the freak-folk and transformed her sound into something epic with help from producer Randall Dunn. Dunn had already helmed albums by primarily acoustic acts like Akron/Family and Six Organs Of Admittance, but he brought to Nadler’s music the bowel-quaking intensity that he gave to trancey drone metal outfits like Sunn O))) and Earth. The results were austere and all encompassing – acoustic Americana of epic proportions, like a clapboard shack built to the dimensions of a gothic cathedral.

Dunn is onboard once again for Strangers, which expands that sonic palette even more, with pianos, strings and a (very minimally deployed) rhythm section. The clawhammer guitar is still there – particularly on the coma-paced ballads like “Skyscraper” and “Dissolve” – but they are drenched in a specific type of reverb and resonance that turns them into something suitably epic. Opening track “Divers Of The Dust” transfers Nadler’s guitar patterns onto a piano, enhanced by strings. It envisages a post-apocalyptic scenario (“Lying here on the rocks/With the cliffs disintegrating”), which seems to set the tone for the entire album of dystopian narratives, be they about lost love or friendship.

Nadler opens the Roy Orbison-ish bolero “Shadow Show Diane” – a curious portrait of voyeurism – with lyrics about being “tired of watching TV” and “taking pictures on my phone”. It’s oddly startling to hear such modern references in an album that makes a point of its timelessness – these are songs that could have been sung 20, 30 or 200 years ago.

What’s even more effective is that Nadler never pushes towards the epic. In the same way that a skilled actor playing a drunk tries to sound as sober as possible, her voice achieves grandeur through subtlety and understatement. It is intimate, sometimes almost conversational, and words are sighed, whispered, confided. Oddly, the more she pulls back, the more epic it sounds. On “Skyscraper”, she double-tracks spooky, medieval harmonies with herself, in the style of Linda Perhacs. On “Katie I Know” and “Janie In Love” her voice soars, dreamily, over a full band accompaniment that sounds like something that skilled sessionmen from Laurel Canyon circa 1971 might have provided.

Sometimes, her approach conjurs up whole new areas of fusion. The title track invents a kind of gothic country and western music, where a woozy pedal steel weaves in and out of distorted riffs and E-bowed guitars, with Nadler’s gently sighed vocals holding things together.

According to Nadler, one central lyric here is on the wonderfully woozy “Waking”, which she compares to the experience of Dorothy in The Wizard Of Oz, where the protagonist is not aware of what is a dream and what is reality. And Strangers is an album filled with such reverie – an album that seems to exist in some hinterland between dream, nightmare and reality.

Q&A
Marissa Nadler
You used that Dadaist cut-up technique on the first song. How does that work?
After writing mainly about relationships and heartbreak, I wanted to try a new approach, to look outward into the world, rather than inward. I put together collages, using pages from history books, newspapers and old National Geographics. I’d literally cut them up and look for words that were beautiful and inspiring, and then find relationships between the words, and create stories based on those relationships.

The lyrics here seem to be less personal, less about heartbreak – is that right?
Yes and no. I’ve realised that your personal life doesn’t have to be in a shambles to have material for lyrics – that’s not a sustainable songwriting model! But a lot of the songs are still personal, they’re just less about romantic relationships and more about human themes of friendship. This time I’ve approached things in a more painterly manner – it’s less hyper-realistic, more abstract and surrealist.

Is it true you’ve collaborated with death metal bands?
Yes! I did some work on a Xasthur record, among others. Ambient vocals work really well with that kind of music. It also chimes with the innate darkness and melancholy in my music – a lot of my fans are heavily into black metal, which should seem odd, but I don’t think it is.

What have you been listening to lately?
There are certain constants I always love, like Joni Mitchell and Leonard Cohen. And I’ve recently been listening to a lot of Roy Orbison, Townes Van Zandt, Liz Harris’s Grouper, Angel Olsen and Glenn Jones. All the singers I love don’t have any affectations. I’ve tried to strip my voice back to its purest, and remove the frills, let the music speak for itself.
INTERVIEW: JOHN LEWIS