Kings Of Leon – Because Of The Times

It sprawled from the South. “Southern Strokes” return, swampily 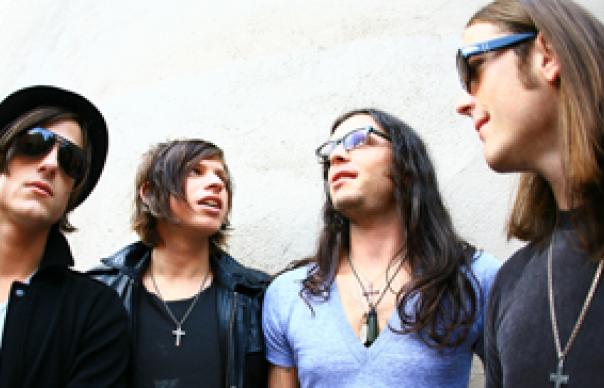 Since their arrival in 2003, Kings Of Leon have grown up fast. Despite two big albums, this is still a band wise enough to acknowledge its limits: almost as if they suspected that their punky take on the Creedence formula might have a limited lifespan, their third album sees them providing an interesting reworking of their original sound.
Perhaps it’s the logical result of touring massive venues in America with U2 and Dylan last year. Whatever, (i)Because The Times(i) – named for the yearly Pentecostal shindig their preacher father dragged them to as children – finds the Followill boys edging further towards the realm of swampy, Zeppelin-esque rock.

It’s all certainly a lot more complex, if a little less immediate, than anything they’ve done before. Opener “Knocked Up” acts as mission statement in itself. Their most epic song to date – at seven minutes plus – it’s a heavily percussive treat shot through with cousin Matthew’s wiry guitar figure. Essentially a tale of smalltown runaways, it could equally be about the group themselves. “People call us renegades,” sings Caleb, “We like livin’ crazy/ We like takin’ on this town / Cause people’s gettin’ lazy”.

Given their prodigious schedule over the past two years, you could forgive KoL the odd note of weariness. Instead, they sound reborn. “Black Thumbnail”, for instance, rocks like a cross between Creedence Clearwater Revival and the Pixies. As does muscular first single “On Call.” But it’s on the swampy “Trunk” (like The Doors, but on a rainy night in Georgia) and the messy groove of “Arizona” that they really get into their groove.

As good as the music is, though, special mention must be made to singer Caleb’s gusty voice. His phrasing – recently compared by Eddie Vedder to Sinatra, no less – is a joy to hear. Even when he’s delivering lines like
“She looks so cool with her new Camaro / It’s black as coal and it go / Don’t it go go” he still manages to make it sound convincing.
As with the record all round, it’s little short of miraculous.