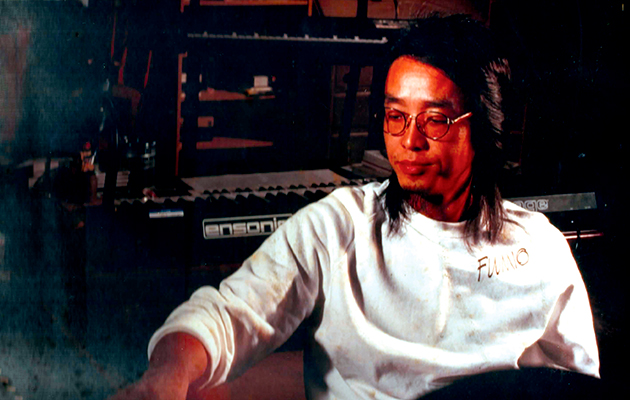 Given the recent rediscovery of so much enthralling music that was formerly consigned to the uncool category of New Age, there’s no excuse for operators of holistic wellness spas and massage therapy clinics to torment their clients with tired playlists full of Enya and babbling brooks. Surely our present-day quests for serenity would be better facilitated by the sounds on Kankyō Ongaku, whether the shimmering electronic tones in Yoshio Ojima’s “Glass Chattering” or the gentle clatter of chimes, drums and synthetic equivalents in Jun Fukamachi’s “Breathing New Life”.

Whatever becomes of that hope, the latest in Light In The Attic’s Japanese Archival Series is another invaluable example of the mindful crate-digging that has fostered a new vogue for private-issue, synth-slathered, ’80s-vintage mellowness, along with the overdue reappraisal of composers such as Joanna Brouk, Laraaji and Suzanne Ciani. If some of this music still bears the whiff of eucalyptus oil and yoga sweat, then it’s a small price to pay for the awe it elicits.

Compiled by Spencer Doran of Portland duo Visible Cloaks, this survey extends Light In The Attic’s mission to broaden awareness of Japanese sounds that had been little heard in the west. The Seattle label’s Japanese Archival Series has already produced treasure troves in the early-’70s folk-rock compilation Even A Tree Can Shed Tears and reissues of five solo albums by Haruomi Hosono of Yellow Magic Orchestra and Happy End. Of the artists collected on Kankyō Ongaku, YMO and Hosono are likely to be the two most familiar to listeners outside Japan, though devotees of anime director Hayao Miyazaki may recognise the name of his regular collaborator Joe Hisaishi. There was also a modicum of American exposure for Interior, a minimalist, avant-rock quartet who somehow ended up on Windham Hill, the label that was to new age what Sub Pop was to grunge. Sure enough, Interior’s selection “Park” bears less resemblance to George Winston than it does to This Heat at their eeriest.

Doran aims to create a wider context for a musical phenomenon that was quintessentially Japanese in many respects while also part of a longer exchange of artistic ideas between east and west. In his thoughtful liner notes, Doran roots the emergence of “kankyō ongaku” (a term used since the ’60s and which translates as “environmental music”) to the spike in popularity for the music of Erik Satie in late-’70s Japan. One reason was the affinity between the French composer’s concept of “furniture music” and Japanese traditions in which natural sounds were integrated into meditative and musical practices. It also aligned neatly with the enthusiasm for John Cage’s ideas and Eno’s ambient recordings among Japan’s musical vanguard. Doran sees that affection as somewhat ironic since these westerners’ eagerness to blur boundaries between music and non-music (as well as art and life in general) owed much to  the teachings of Daisetsu Teitaro Suzuki, a Buddhist scholar who had a profound influence on Cage.

Nor are those the only ironies at hand. These simulations of natural tranquility became Walkman fodder for members of a rapidly urbanising society, more and more of the country’s natural spaces becoming forests of glass and steel. And as much as this music may encourage blissful states of Zen detachment, it was often created for purposes that were rather worldlier. One originally accompanied an ad for Seiko watches. Other pieces were made to be piped into the postmodernist architecture and gleaming buildings that exemplified Japan’s economic boom. A rapturous work of nigh-perfect stillness by Haruomi Hosono, “Original BGM” was commissioned by the Muji department store. Yet those origins may be more fitting than you think – after all, Eno has always been frank about ambient music’s potential applications as a balm for harried travellers and consumers.

Elsewhere, the music’s signifiers of the organic – like the volcanic stones used in “Ishiura”, a spacious and spellbinding piece by Toshi Tsuchitori – were surrounded by elements that were unabashedly synthetic. Many of the highlights of Doran’s compilation demonstrate the sumptuous capacities of the era’s most advanced musical tech, like the Oberheim OB-8 in Yoshio Suzuki’s Satie-like “Meet Me In The Sheep Meadow”.

An act that delighted in both innovation and provocation, YMO are represented by “Loom” from their more generally uptempo 1981 album BGM. (As in the title of Hosono’s composition, the name is derived from the tag for “background music”.) Largely the handiwork of YMO’s unofficial fourth member Hideki Matsutake – who’s equally mischievous with the sound of a passing train on his solo selection “Nemureru Yoru” – the piece combines a water drip with the vertigo-inducing audio illusion known as the Shepard-Risset glissando. Like so much of the music on Kankyō Ongaku, it makes for an utterly confounding yet lushly immersive listening experience. It also goes to show that no matter what kind of environments these artists were aiming to simulate or create – imaginary zen gardens for alienated salarymen and soundtracks to consumerist utopias being just two of many – their works feel like strange and captivating worlds unto themselves.