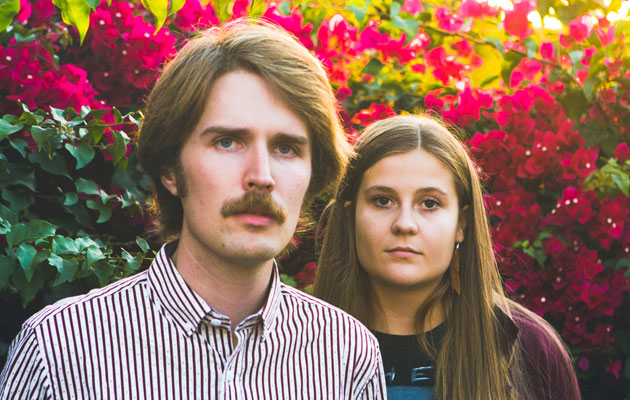 If there’s one song on the new album from Kacy Anderson and Clayton Linthicum that speaks to life’s rhythm – something of a preoccupation in folk and country music – it’s “Providence Place”. Employing effortless vocal harmonies and an elegant swing, the cousins paint a tender portrait of an elderly musician hanging up a fiddle on the wall and laying a mandolin in its case, ready for the move into a care home – very likely the same centre in Moose Jaw, south Saskatchewan, where the teenage Kacy & Clayton used to play a regular Sunday evening set. The emotional force of the song lies in its unsentimental acknowledgement that all things must pass, but that there’s real comfort in longstanding friendships and shared pleasures – making music, especially – given extra resonance by being rooted in a specific place.

Anderson and Linthicum cut their teeth on folk, polka and country standards, which explains why their 2011 self-released debut leaned so heavily on the past, with the likes of “Ain’t No Tellin’” and “Henry Lee”. The follow-up was similarly indebted, with just three originals, but 2016’s British-folk-attuned Strange Country flipped that ratio, their fine instrumental teamwork and Anderson’s effortlessly emotive voice marking them as significant new talents. Their breakthrough, though, was The Siren’s Song, a year later. Produced by Jeff Tweedy, it proved that the duo were nether revivalists nor modernists; rather, translators of tradition with an intuitive syntax of their own.

As the title suggests, Carrying On follows through. Its 10 electro-acoustic songs were written on the road out of necessity, not choice: Kacy & Clayton went straight from a tour of western Canada to recording at Tweedy’s Loft in Chicago, which they did in just four days, mostly live. It’s a warm, beguiling set that tips its hat to roots music interpreters as disparate as Hoyt Axton (Linthicum cites his moody, baroque folk-pop effort, My Griffin Is Gone), Fairport Convention, Dolly Parton, The Byrds and Bobbie Gentry (notably, her Delta Sweete), while also tapping Cajun fiddle music and the work of Ralph Mooney, a celebrated steel guitarist on the Bakersfield country scene. It’s to their credit, though, that there’s no strained lifting. Explaining her own relationship with the past, Anderson tells Uncut: “A favourite folk musician of mine, Shirley Collins, said when she sings she feels past generations standing behind her. It’s a real feeling that speaks louder than the fear of bastardising a song that’s not my mother tongue.”

Kacy & Clayton’s natural eloquence shines throughout, from airily twanging opener “The Forty-Ninth Parallel” – where, with the same bell-like purity and unforced warble of a young Parton, Anderson chastises herself for marrying for love, rather than money, “like any woman in her right mind would do” – to “That Sweet Orchestra Sound”, a jangling charmer with a gaggle of guitars set to a bar-room swing, that’s dedicated to “the memory of Bud Romanski, Bob McGlynn, Lonnie Harden and the many other pickers from our region”. In between sit the alluringly woody and rhythmic “The South Saskatchewan River”, Linthicum conjuring a singular landscape via mention of hoar frost on aspen and polluting factories, and the deceptively romantic, slo-mo “Mom And Dad’s Waltz #2”, which ponders the fate of a “child passed around for years and years” between his struggling mother, grandmother and a father who works away.

It’s one of the album’s two sober tracks, the other “In A Time Of Doubt”, which suggests Julia Jacklin having a ’70s country moment, its cheerfully fat chunks of 12-string guitar disguising Anderson’s snapshot of a cruelly manipulative relationship. “Intervention”, though, is a brief but joyous counter to that pain, set to a steady canter, her strong, clear voice announcing that thanks to her new love, “the pills I take to keep my mind, I don’t need them anymore”.
That there are no covers on Carrying On (a first) says much: Kacy & Clayton are so in tune with their heritage they no longer need to exercise it explicitly. For them it’s not an obligation to carry the traditional country-folk baton, more a deep pleasure and privilege, interpretation with flair being their right.