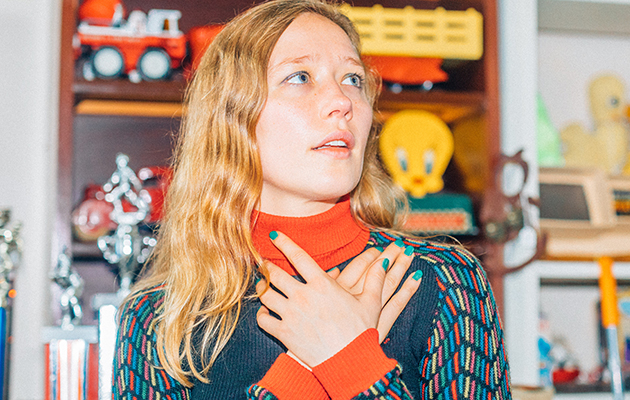 Julia Jacklin’s 2016 debut, Don’t Let The Kids Win, captured the Australian songwriter in a sort of existential no man’s land; as she approached her mid-twenties, she felt like everyone had a life plan except her. She worked on a factory production line, writing music in her free time. She’d long contemplated pursuing a career as a social worker. Instead, motivated by her love of Aldous Harding’s sound, she spent her savings on a month in a Christchurch studio with Harding’s collaborator Ben Edwards, and the very act of sharing those songs that fretted about her future plotted her a new course.

If Jacklin was looking for a kind of certainty, then she got it – almost two years of solid touring ensued. The parallel to that was that her romantic relationship was crumbling. Instead of the tentative questioning of its predecessor, then, Crushing is most definitely about one core theme – recovery from savage heartbreak. And it is breathtakingly raw.

The process may be familiar, but the  way Jacklin journeys through the stages with stark vulnerability means it feels wholly fresh: from the explosive separation to a determined acceptance, via all the emotional turbulence in between. But it’s also about healing, Jacklin gradually reknitting together the gap between her body and mind that had grown to be so cavernous.

The pure detail means it’s not a standard break-up collection, but  rather one so intimately relayed that  the listener practically wears the experience with her. It’s right there in  the opening song, “Body”, built on a simple, shadowy guitar line. The story  of a man-child pulled up for smoking  in the toilets on a short-haul flight, ruining a weekend away. “There on the Sydney tarmac/I threw my luggage down/I said I’m gonna leave you/I’m  not a good woman when you’re around,” she sings, as the subject later threatens  to weaponise a private image. “Naked  on your bed looking straight at ya/Do you still have that photograph?/Would you use it to hurt me?” The repeated outro line of “I guess it’s just my life/And it’s  just my body” ramming home the subject’s manipulation.

The Angel Olsen-esque “Head Alone” was written on the road, where Jacklin spent hours staring out of tourvan windows. The song bleeds like a fresh cut, a demand from the singer for psychological and physical space in a notoriously claustrophobic touring environment. “I don’t want to be touched all the time,” she asserts. “I raised my body up to be mine.” The more pacy garage rock of “Pressure To Party” follows, and marks the beginning  of the rebuild – the loaded choice  between ‘getting back out there’ to meet someone new, versus the familiar comfort of an old flame. “I’ve locked myself in my room/But I’ll open up the door and try to love again soon,” she decides in that moment.

Jacklin does this time and time again, puts herself through the wringer, preserving and processing the hurt. “Don’t Know How To Keep Loving You” is a tender country-folk ballad – in the vein of past tourmates Whitney – while “When The Family Flies In”, just Jacklin accompanied by a piano, is the album’s lowest point, in both tempo and frame of mind. Finger-picked acoustic number “Convention” is a sarcastic swipe at strangers who impart uninvited ‘advice’, and “Good Guy” evokes the loneliness  of the rebound. “Tell me I’m the love of your life/Just for a night even if you don’t feel it,” she trills.

Things reach a visceral apex on the penultimate “Turn Me Down”, a track so exposed that recording it left Jacklin emotionally “ruined”. When she finally got it taped – the cracks and quivers in her voice are audible, the production defiantly un-airbrushed – she was  lying on the vocal booth floor, which led to an “awkward moment” when a 16-year-old studio intern came in to check she was still OK. It’s a genuine relief to hear Jacklin sing, “I’ll be OK, I’ll be alright, I’ll get well soon, sleep through the night,” as closing track “Comfort” fades away.

It’s a moment that brings full circle a family of songs that are strikingly evocative, but never overwrought. Were Crushing soundtracking a film visualising the story it might have audiences battling an urge to reach through the cinema screen to console the protagonist. But that might not help – after all, heartbreak is lonely, unpredictable and personal, and no  two experiences of it are identical.  Here’s Jacklin’s, a powerful take on  the oldest inspiration of them all.