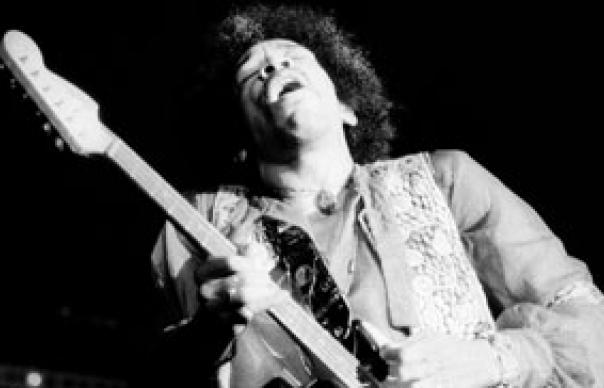 It’s not exactly a new idea, but it’s still contrary to popular belief. What if Jimi Hendrix’s mythology rested on the sprightly concision and construction of his pop songs, rather than the entrail-sprawl of his extended guitar pyrotechnics? Never mind the solos, what about the tunes?

It’s a thought that passes through the mind repeatedly during Winterland, (yet) a(nother) reissue from the Hendrix estate. A six-disc bootleg set, The Winterland Reels, has floated around for some time, but now Legacy have taken it upon themselves to make Winterland available as both a single-disc set, and a four-disc deluxe edition replete with booklet, interview, and heavy selections from Hendrix’s three-night stint at the storied venue, San Francisco’s Winterland Ballroom, from October 10–12, 1968. Performed just as the double album indulgence of Electric Ladyland was released, it captures the Experience just before their break, with guest appearances from, among others, the Airplane’s Jack Casady.

It was also previously released in bowdlerised form, as a single disc, by Rhino back in 1987, and having gone the distance with the deluxe Winterland, there’s something to be said for tasting these live performances in a highlights-only, heavily edited context. That said, the best moments on the deluxe edition are almost worth laying down for. A beautifully poised “Little Wing”, from the October 12 show, is a great reminder of what an articulate, mythopoetic song writer Hendrix could be, and his solo, splitting the song’s happy-sad tenor wide open, is all hanging tones, diving into pools of wah-fuzz but mostly holding its breath above the water, the better to articulate the melancholy at the heart of what may still stand as Hendrix’s best song. The devastating, climbing-and-descending riff of “Manic Depression” has rarely seemed so drowsy, and the performance here from the 12th also shows off how limber Mitch Mitchell was, plotting a wild course across the song, accentuating its shape-shifting dynamics. On the other side of the fence, the guitar immolation of the 10th’s “Star Spangled Banner”, for a few disorienting minutes, is closer to Lee Ranaldo or Ascension’s Stefan Jaworzyn exploring the outer limits of what the guitar can do, the instrument in freefall until Hendrix pins it to the mast with the anthem’s melody.

But it’s the playing on the October 11 set that’s particularly heady, with some great slabs of drone-out action scrawled across the jams: the version of “Tax Free” from this show slips in and out of rote blues meandering, but there’s a beautiful section at around the six-and-a-half-minute mark where Hendrix worries over a few notes, stretching them for all their overtonal properties while also tangling with the bass in a cat’s cradle of noise. Similarly, the ending of Dylan’s “Like A Rolling Stone”, the song already drawn and pulled like so much taffy over its 12 minutes, has Hendrix pulling out carillon notes, before driving the point home with hallucinogenic feedback. Winterland is full of such moments, where you’re reminded that another of Hendrix’s great skills was his understanding of the compulsive draw of the drone: that sometimes incremental shifts in tonal configurations could speak more eloquently than his trade-mark solos, hammer-ons and blues comping.

So there’s some great music on here – but let’s not forget, there are also great portions of relative dead air. For example, the October 10 jams on “Tax Free” and “Sunshine Of Your Love” – which is stripped of its vocal melody, and thus the essential counterpoint to the monolithic riff that makes Cream’s original swing – may feature moments of rollercoaster-risky guitar playing, but by your third or fourth listen, they are, whisper it, deathly dull. This problem mars many live recordings from Hendrix and other musicians from this era – though considering the repeated alchemy the Grateful Dead pulled from the skies on their own Winterland set, it sometimes makes you think the Experience, at this point, weren’t quite as alchemical as we’re led to believe.

The box itself seems a weird one, too – the single disc release acts as a good primer, but if Legacy are going to stretch to a ‘deluxe’ 4CD set, then why not stretch two further and make available the Winterland Reels 6CD bootleg in its entirety? There are more than enough Hendrix heads who would obsess over the full run, with its many peaks and troughs, goofy banter, go-nowhere jams, and then those moments of breathless suspension, when the Experience finally lock into space.
Jon Dale