Four-disc monument to the Killer, containing no filler... 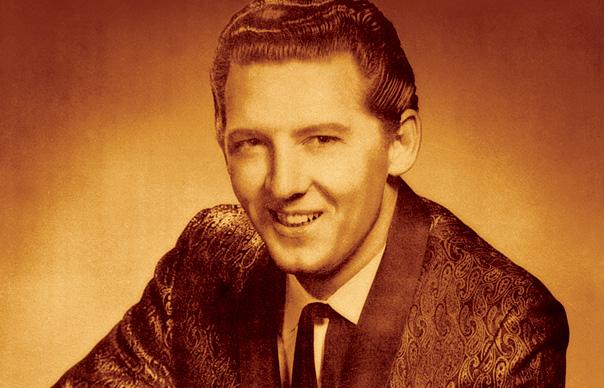 Four-disc monument to the Killer, containing no filler…

What with one thing and another, it took the Grand Ole Opry a while to invite Jerry Lee Lewis to make his debut. Sixteen years, in fact, from his first hits (“Whole Lotta Shakin’ Going On”, “Great Balls Of Fire”) to finally ushering the Killer onto the stage of Nashville’s Ryman auditorium in January 1973.

The high temple of the country music establishment had their reasons for hesitating. Lewis was not known for family-friendly behaviour, unless one counts as such already having three families by this point – one, to the detriment of his box office, with a cousin he’d wed when she was thirteen. But he’d grown up, surely. He was pushing 40. He’d married for a fourth time, to someone old enough to vote. And he was reinventing himself as a proper country singer – he’d had hits with versions of Kris Kristofferson’s “Me & Bobby McGee”, Jimmie Rodgers’ “Waiting For A Train” and Ray Griff’s “Who’s Gonna Play This Old Piano?”. The Opry prepared to formally welcome the black sheep to the fold.

“Let me tell ya somethin’ about Jerry Lee Lewis, ladies and gentlemen,” the ostensibly repentant sinner introduced himself. “I am a rock’n’rollin’, country-and-western, rhythm’n’blues singin’ MOTHERFUCKER.”

The failure to use this unimprovable assessment of Lewis as the title of this artefact is about the only mis-step its compilers made. The four discs contain 106 tracks, arranged chronologically – the first released by Sun records when Eisenhower was president and people thought this Elvis kid would be over by Christmas, the last a defiantly feral “Wild One”, from the soundtrack of 1989 biopic “Great Balls Of Fire” (Lewis has been little wearied by the two decades and change since – though 2010’s duets collection “Mean Old Man” was a treat).

As a study of Lewis’s progress, it’s riveting, not least because it reminds that his move countrywards was not merely a foray in search of an audience that might forgive him his manifold trespasses – he was singing Hank Williams’ “You Win Again” like he meant it as early as 1957. It’s also a necessary lesson that Lewis’s legend is underpinned by prodigious talent – this is a study of sustained instrumental virtuosity, a reminder of how much of rock’n’roll still bucks and twitches to the beat set by Lewis’s left hand, pounding the lower keys like they’ve walked into the bar and asked for a drink with a paper umbrella in it.

It’s also an expertly curated compendium of modern American song, although Lewis never really merely covered songs, or even did anything so mannerly as interpreted them. Time and again, he strips them down, soups them up, and turns them loose, unmistakable as anything but Jerry Lee Lewis numbers, breezily heedless of whether they were originally written as heartbreak laments (Hank Williams’ “Cold Cold Heart”) or portents of apocalypse (Creedence Clearwater Revival’s “Bad Moon Rising”). Even at his tenderest (Ernest Tubb’s “Walking The Floor Over You”, say), Lewis never quite dispels the concern that he’s about to set fire to something or swat someone with his piano stool.

Lewis called his (terrific) 2006 album Last Man Standing, an acknowledgement of his status as a surviving pioneer (this title was perhaps rather a snub to Chuck Berry, but it, uh, wouldn’t have been the first). This collection is both monument to an incalculably influential canon, and a chronicle of a life now barely imaginable, still less repeatable. Lewis, like all the few remaining rock’n’roll pathfinders, has something of the gnarled cachet of veterans of long-ago wars, occupying the unfathomable realm of those who have experienced things beyond the ken of subsequent generations. He haunts this compilation as he haunts rock’n’roll, a cackling, piano-kicking embodiment of the chaotic contradiction of its origins: the devil’s music played by the God-fearing.